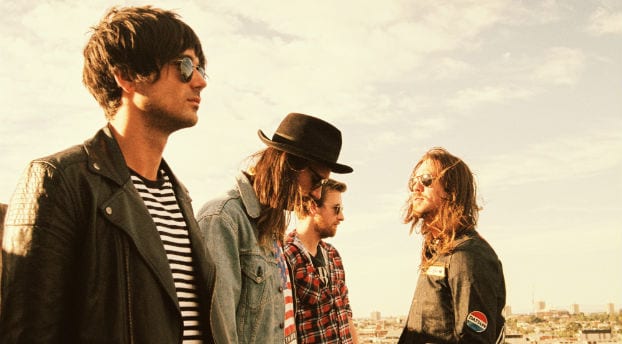 Melbourne-based, 70’s rock’n’roll inspired misfits The Velvet Addiction have released their debut single Take Me Back; a swaggering, classic-rock influenced tune that will have you reaching for your leather-jacket and aviators.

To accompany the debut single, Take Me Back, the boisterous boys have also released a music video which demonstrates The Velvet Addiction‘s charisma soaked live shows.

To celebrate the release of Take Me Back and its music video The Velvet Addiction will be hitting the road to tour through Albury, Melbourne, Geelong, Byron Bay, Sydney, and Ballarat.

Take Me Back will be available for purchase from iTunes on Friday, March 10. To grab the track go HERE.

Despite being the first release for the young band, the boys of The Velvet Addiction are a unified group, contributing their individual takes to create a larger creative product.

For vocalist, Stefan West, Take Me Back is about the emotional roller coaster of a relationship and how nostalgia can be a barrier.

“Take Me Back is about trying to find that feeling you get when you first start a relationship, the feeling when that person is the only thing you want or need to make you feel whole or happy,” said West.

Guitarist, Aaron Bach, says the song is about the way many people can see things differently and the miscommunication that results.

“It’s about the struggles of differing opinions, the different perspectives that can turn something that always meant nothing to you into something that’s the end of the world,” said Bach.

Delivering an accepting message is what Take Me Back means to drummer, Kieran Howle.

“To me, it’s about trying to find that balance and above all knowing that whatever happens, it’ll be alright,” said Howle.

Formed after a boozy night in a local Melbourne bar, the four musicians came together recognising each others dark histories including broken homes and family violence.

As a result The Velvet Addiction aims show their support for fellow victims of mental health through their upbeat, positive rock’n’roll.