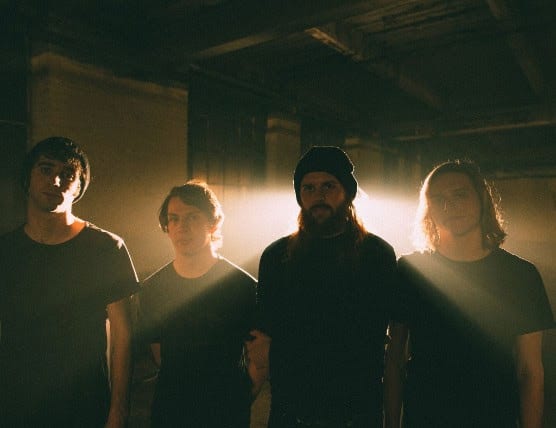 Sorority Noise is now premiering their new music video for No Halo via NPR Music. The video was directed by Kyle Thrash, and focuses in on the painful moments of loss and grief. No Halo comes offSorority Noise’s new album You’re Not As _____ As You Think, out now on Triple Crown Records/Cooking Vinyl Australia.
The album is now available for purchase physically and digitally here.
Sorority Noise write important songs. They go to uncomfortable places, unafraid to let the darkness in – but they’re also not shy at kicking back until the sorrow subsides. They’re songs of confusion, anger, life, death, mental health and, most importantly, hope. They’re what it means to be human.
The vulnerability has been Sorority Noise’s hallmark since they formed in 2013, but it’s never been as precise as it is on You’re Not As _____ As You Think, their third album, out now Triple Crown Records/Cooking Vinyl Australia. The album follows the Connecticut-based quartet’s It Kindly Stopped For Me 7” (2016), critically acclaimed Joy, Departed (2015) and debut Forgettable (2014) and is the most collaborative, fully realised version of Sorority Noise to date.Sorority Noise recorded You’re Not As _____ As You Think with producer Mike Sapone (Brand New, Taking Back Sunday) over the span of 10 days – three times longer than it took to track Joy, Departed – and this increased time allowed the band to hone the songwriting and visceral performances that have launched them onto tours with Modern Baseball, Citizen, Turnover and The Menzingers and into outlets like Pitchfork, Consequence of Sound, The Fader, Spin, AV Club and Stereogum.

Singer/guitarist Cameron Boucher, who prefers not to edit or overthink his lyrics, empties both his pen and soul on songs like No Halo, Disappeared and A Portrait Of, stark vignettes that find him coming to terms with the death of close friends. He’s had days, weeks and months to confront these and other emotions, and when it came time to write about them, the words spilled out.

So what you’re getting is an emotional bulldozer – an unfiltered, inward look at the last year of the band’s life that’s filled with intimate, visceral details yet remains universally relatable. But even amidst heavy subject matter, Sorority Noise want to give you a sense of resilience. “No matter what I feel, it’s going to be OK,” Boucher says. “Things are going to be tough, but it’s going to be fine in the end – and you have to keep going because you just have to. This is how it’s going to be. You’ve just got to do it.”

It’s in this way that the album’s title comes into view, and it only takes inserting a few adjectives – sad, happy, rich, poor – to realise life is all about perspective. Hardships are inevitable, but so is hope. Rather than living in the shadows, Sorority Noise have learned the only way to move past the struggle is by never stopping moving forward into the sun.