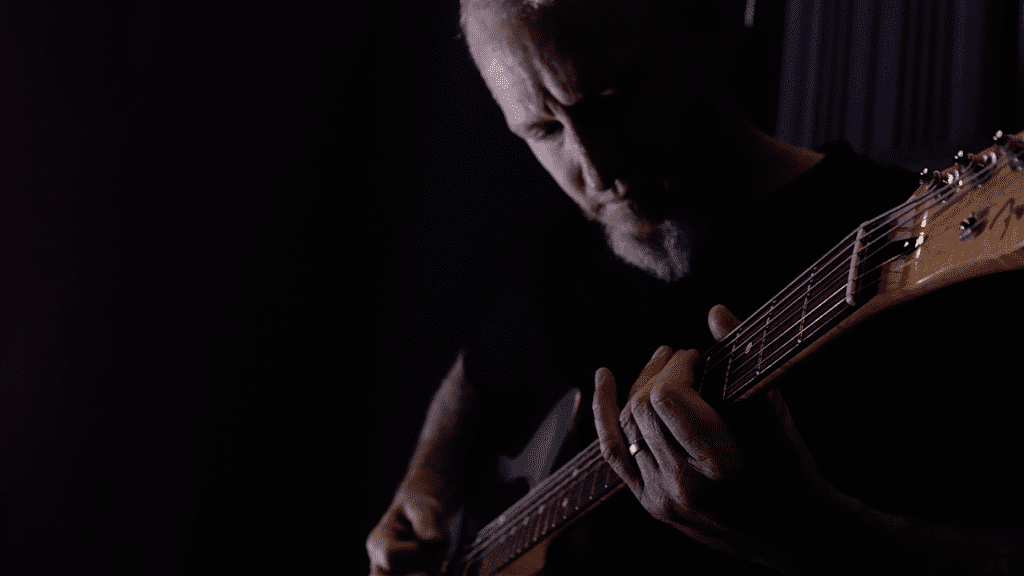 Lucas Stone is a part of the landscape of the Gold Coast and Queensland heavy music scene and has been for what has been the better part of 20 years. His turns as part of the bands HELM, Tension and Scalene are lauded, are iconic and absolutely raw, emotional, heavy and uncompromising. Now, Lucas has embarked on what is his most revealing, most brutal, most true endeavour to date. He is releasing music that will gradually pull back the curtain on his story – a story about the man behind the lyrics and the screams and growls – and is releasing a digital book as well, a chapter at a time, along with each song. These songs feature various guests, a personal selection of mates and industry associates that Stone has either shared a part of his musical journey with or most wants to hear their presence on the tracks. Each performer best matched to the emotion of that story and song.

The first song, “Carry the Black”, accompanies the first chapter, “Get Born” and it touches on the beginning of Lucas’ harrowing tale from near-death at birth, growing up in Wollongong, his “punk as fuck” Mum, being raised in a home outside the law, the perils of hard drug abuse and so much more. A unique opportunity to look into a life usually not entirely revealed by the lyrics of a song, only glimpsed. Stone has always been very hesitant to reveal these elements of his life. As he relaxes into middle age, only now has he mustered up the strength, impetus and inspiration to couple this new music with the story. His intention throughout the process, to give back to his audience through his experience, and, survival.

‘Carry The Black’ is a tale told alongside his friends Colin Jeffs (Tongues, ex-Aversions Crown) on guest vocals, Leigh Dowling (Hammers) on guest vocals and Simon Reys (Scalene) on bass. Stone goes on to describe the song.

“It’s a rock song with a black soul. A metaphor for the shadows we carry with us, trudging through this swamp of mistakes and bad decisions in the hope of reaching something beautiful. Sometimes the beautiful is the ocean we’re drowning in – just gotta learn to swim and, in turn, learn to love the swim.

I channel pure human evil for this one. It’s not nice. It uses satanic imagery and dialogue as the best depiction of the metaphor, relative and contradictory to two of my most hated facets of humanity – organised religion and forced governance.

In short, this song is about buckling to all of it. About giving in and living with the pure disdain for our weakness as a species. We are forced to live with, and even enjoy, everything we hate the most just to survive this mess. Totally goes against our natural state of being and where we’re supposed to position ourselves. But we do it anyway.

‘We are so far south from everywhere, but this is where we dwell, from here on in’.”

Stone has poured his heart and soul into this new music and the book, prefacing the first chapter with words only he could have said.

“Dearest Punter, Peer, Mate. Thank you so much for investing the time and pennies in engaging this release, in both audio and written format. I’m trying to create something different here, using the tools that the modern age provides, but also attempting to shovel up some long lost nostalgia within the approach, for you, the audience. Something that kind of takes us back to the days when we all used to froth hard on album artwork, lyrics, epic cotton, posters, the players involved, etc. just as much as the 10-grom-strongscream-a-long in that beat up old Kombi, Vulgar Display of Power snapped off at 11, on the way to your local break to rip bongs and pull into epic slabs – before life got serious.

Might be my age or it could just be that I’ve seen several stages of radical change in the record industry over the last 25 years. A lot lost, a lot gained – not necessarily bad or good – just different. Real different.

Anyways. For the newbies or any existing fans of my work with Helm, Tension or Scalene, I sincerely hope you dig what I’m putting together here. I’m attempting to engage you. Knock down some walls, get personal, get honest, and maybe a little brutal. My lyrics and song structures. Connections. Disconnections. And, more importantly, where it all got born. What it means. Why it means it.”

‘Carry the Black’ is in digital outlets now (Wednesday 19th April), with purchasers getting the digital chapter of the book with their iTunes purchase, which can be purchased HERE.