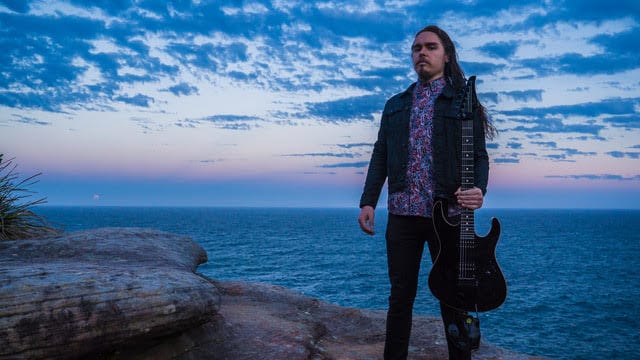 DENALAVIS is the fourth instrumental EP from Ivanyi, following 2016’s critically acclaimed The Usurper’ which saw him reach new heights and go on to support international heavyweights on the back of its release,
including Katatonia, Soilwork as well as his own successful east coast mini headlining tour with I Built The Sky in 2016.

Ivanyi comments: “For the recording of Denalavis, I unapologetically exercised patience, and delved deeper to explore my song writing boundaries to carefully intertwine my love of modem heavy metal and classic, progressive rock music of the 1970’s, to create something that I see as both highly energised, yet respectful to the classic texture and tonal value of the records I grew up with. The inspiration for the music came directly from the deeply transfixing artwork of Jeff Christensen (USA), who I have now collaborated with for the third time. This EP is my sonic interpretation of the artwork, which itself features as the cover. I once again teamed up with renowned Australian drummer David Horgan, who conceptualized and performed the astoundingly complex drumming on the EP.

“DENALAVIS” was independently recorded, produced, mixed and mastered by Ivanyi and David Horgan on location at Ivanyi’s studio in Sydney, Australia during late 2016 and early 2017.

Ivanyi ended 2016 on a huge high, including supporting Soilwork (Sweden), Katatonia (Sweden) and his own successful headlining mini-tour in Australia, and has already had a very busy 2017 with the completion of Denalavis, several notable recording projects – including being featured on the upcoming Scale The Summit record alongside John Browne (Monuments) Scott Carstairs (Fallujah) Nick Johnston, Jeff Loomis, Nathan Navarro, Per Nilsson (Scar Symmetry) Angel Vivaldi & Yvette Young (Covet), performed in the United States and attended NAMM in January, and has just been confirmed to perform in the United Kingdom at UK TECH-FEST in July!

“Ivanyi is engineered to deliver a semi-psychedelic haze to what is a precise and calculated assault on your aural palate” –IPHYB
“In a burgeoning scene which is becoming increasingly populated with derivative and uninspiring music, Ivanyi is one of the finest one-man instrumentalists out there” -HEAVY BLOG IS HEAVY
“an Aussie, proggier Steve Vai” -GEAR GODS

Denalavis will be released June 1.
Pre orders and first single will be available on May 1.