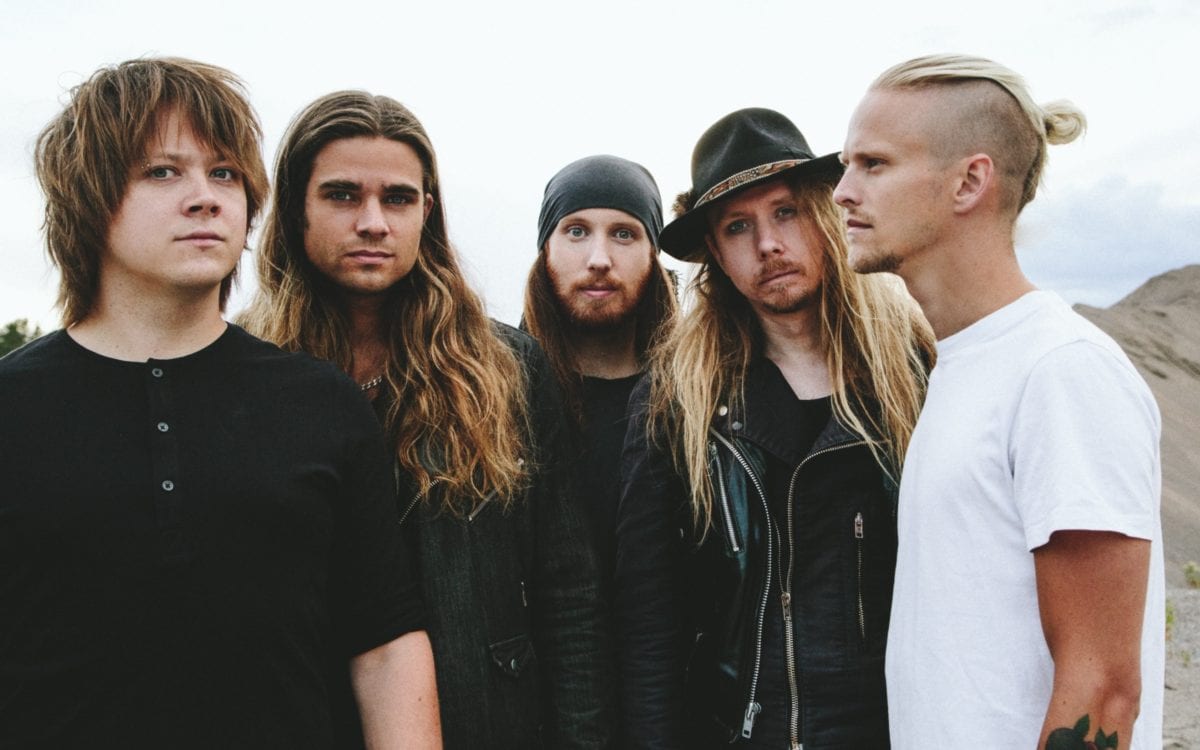 H.E.A.T have today unveiled their brand new music video for ‘Redefined’, taken from their ‘Into The Great Unknown’ album which is released by earMusic on Friday 22 September.

After one and a half years of intense songwriting, with guitarist Dave Dalone (aka Sky Davis) back in the mix, the band went on a questionable trip to record an album in Thailand, once again with Swedish Grammy award-winning producer Tobias Lindell. With 10 top songs in their cannon, H.E.A.T entered the heavenly Karma Sound studios in the outskirts of Bangkok to record what would become the fifth studio album. Once again the band continue the musical landscape with an innovative, highly explosive and refreshing melodic rock sound and an unforgettable collection of fantastic new songs.

‘Into The Great Unknown’ is the follow-up to 2014’s critically acclaimed ‘Tearing Down The Walls’.  2012’s successful ‘Address The Nation’ album was praised worldwide as one of the best albums of the year, and consolidated the H.E.A.T’s growing reputation as the new leading band in hard edged melodic rock.

In 2009, H.E.A.T had a huge hit in Scandinavia with the song ‘1000 Miles’. That same year the band’s second album ‘Freedom Rock’ was nominated as one of the Top 50 albums in 2010 by Classic Rock magazine UK. Since then, they’ve toured all over the world, blowing audiences away with their outstanding live concerts.

In a time when artists like Foreigner, Journey and Whitesnake are enjoying a resurgence, teenagers are re-discovering the melodic approach to hard rock. The kids are suddenly wearing their classic rock band logos on t-shirts. H.E.A.T is the beacon of light that many say will carry this tradition into the future. They’re young, ambitious and full of energy and ideas.

H.E.A.T don’t hide their love for their classic rock heroes, but don’t try to copy it, either. They just do it and they want to be the best at it. And they are one of the best – drawing both young and old

‘Into The Great Unknown’ is a rock and roll journey into the great unknown. The album delivers everything H.E.A.T is loved for – frontman Erik Grönwall’s incredible vocal talent and the band’s traditional approach to melodic rock.

The result is a set of high-quality tracks that bend the genre’s boundaries and take it to new heights. H.E.A.T’s fifth album incorporates some of classic rock’s most renowned features and taking them into another dimension.  H.E.A.T have always had a grasp for great melodies.  ‘Eye Of The Storm’, ‘Redefined’, ‘Time On Our Side’ and ‘Do You Want It?’ embody catchy melodies and fresh ideas, all of which takes the band’s talent to the next level.

“During the making of this album, I think we all felt a little bit like astronauts going off to space for the first time,” says guitarist Dave Dalone (aka Sky Davis). “We set out on a journey not knowing what we would come back with, or if we’d even make it back. Somewhere along the way, the pieces began to fall into place. There’s just no point in doing the same album over and over again just because it works. When it all comes down to it, you want to make the songs shine to their full potential. If that includes bending the rules of the genre or crossing paths into unknown territory, so be it.”

“The title ‘Into The Great Unknown’ suits the album for many reasons,” says drummer Crash. “The plan, to focus entirely on the song writing and to not do a live show until the new album is out, was a new thing for us.  We had never done anything like it, how do you ‘not’ play live for two years?  We had been doing live shows since we were kids.  Another leap into the great unknown is the music itself, with no limits and elements never before seen in H.E.A.T.  Eric Rivers disappeared into the great unknown and former guitarist Dave Dalone (aka Sky Davis) came back from it.  The album cover is once again created by Russian artist Vitaly S. Alexius, and is inspired by the mystical space, the greatest unknown known to man.”

Track By Track by Erik Grönwall

Do You Want It?

“Do ya, punk?! I don’t know where to start. It’s about sex. Sex gone bad. Let’s just say that a certain sound engineer in a certain studio in Thailand ended up with the boys in H.E.A.T on walking street in Pattaya. Apparently the devil created that place to give us inspiration for this song, and we thank him for it.”

Eye Of The Storm

“In a hurricane there is a treacherous place, after the initial big wind… as the centre of the storm passes over where it is seemingly calm and still and safe. This is always temporary and what happens next is the strongest and most dangerous part of the storm.”

“That is often the same scenario in relationships. That calm in the “Eye Of The Storm” tricks people into taking their breaths and letting down the guard. Then the winds of emotion hit again and even harder.”

Time On Our Side

“The song is about a relationship in which you have lost something over the years and it has become more and more difficult to endure. The lyric is sung in the perspective where you are begging your counterpart to have faith and patience in each other with a promise that you’ll do everything in your power to make it better again.”

“When I first heard the chorus on Time On Our Side there wasn’t a single hair on my body that didn’t stand straight up,” says bassist Jona Tee. It’s just one of those songs that immediately touches you and sends shivers all over the body. The combination of the melody and the lyrics is just perfect. It instantly puts you in a state of mind where you begin to ponder what really matters. I may have experienced this before only with 10 songs, tops. The rest of the song serves as the perfect appetiser for the epic main course. Enjoy!”

“It’s a song about not following the system e.g. you go to school, study hard, get good grades so you can get a good and safe job, you take a loan to buy a big house, a new car but you never stop to consider what you are selling. You are selling your time 8 am – 5 pm at a job that you might not even like. That’s the system we are taught in school to follow and that’s a life I don’t like. I want to wake up every day of my life and do whatever I want with my time and that’s what I do. So I guess I’m a bastard of society :-).”

“At the top of our career in late 2015 we decided to not play a single show until the new album was out, to focus entirely on the song writing. In fact, the last show was in Tokyo in September 2015. Shit City is a metaphor for the unexpected place H.E.A.T ended up in for a short while at the beginning of this song writing period. Working mostly behind the curtains, it was a new thing for the band to slowly fade away from the light of fame while other bands never slowed down. I think that it hit us harder then we could have expected. Then we got kicked out of our rehearsal place within 24 hours’ notice. We got a new one quite fast but it had a sewage problem which drowned all our gear only a few days after moving in. Shortly after, the former guitarist Eric Rivers left the band. Shit City is like a modern version of Guns n’ roses “Welcome to the jungle” mixed with Twisted Sister’s “We’re Not Gonna Take It”. It’s our way to say – WTF is going on, we don’t deserve this! This situation inspired the song and the song inspired us, which slowly made things take a turn for the better and “Into The Great Unknown” started to take shape.”

“I guess we built the concept of the album around the song “Into The Great Unknown” which is a song about what’s happening in the world with the race to March, the discussion about humans becoming a multi-planetary species.”

Best Of The Broken

“This song is based on the quote from Hunter S Thompson: “The music business is a cruel and shallow money trench, a long plastic hallway where thieves and pimps run free and good men die like dogs, there’s also a negative side.” That’s all I’m gonna say about that song.”