The Italian masters of dark musical extremity, FLESHGOD APOCALYPSE, will make their long awaited return to Australia for a headline tour this June!

Since forming a decade ago in 2007, FLESHGOD APOCALYPSE have grabbed the metal world by the throat and not let go. Releasing four albums, relentlessly touring the globe, and amassing a legion of loyal followers.  Their most recent album KING (2016) is being hailed as one of the essential metal albums of the last decade.

Combining the extremity of Death and Black Metal with bombastic, powerful and challenging orchestral arrangements FLESHGOD APOCALYPSE take the listener on a dark journey of epic proportions. Drawing on diverse musical inspirations from film score composers such as John Williams, Hans Zimmer, and Howard Shore through to the melodic death metal of Carcass and At The Gates and the savagery of Morbid Angel, the band have crafted a sound that is powerful, impressive, and unique. There are no limitations on Fleshgod Apocalypse’s creative ambitions as they continue to blur the lines between classical refinement and metallic intensity.

Supports for all shows have been announced Thursday, June 1: Crowbar, BrisbaneEarth Rot and Amicable Treason

In the live arena FLESHGOD APOCALYPSE are unparalleled. Powerful, immense and grandiose. This is not your typical metal show, it’s an immersion into a fantastical world of symphonic wonderment, total heaviness and intriguing beauty. It quite simply must be witnessed to be believed!

Hail to Fleshgod Apocalypse! Hail to the King! 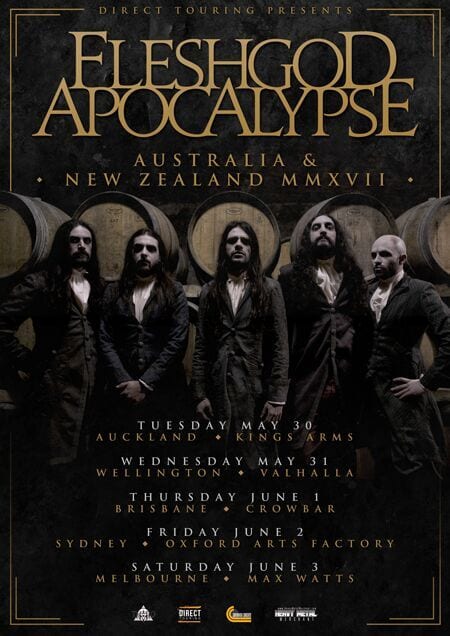