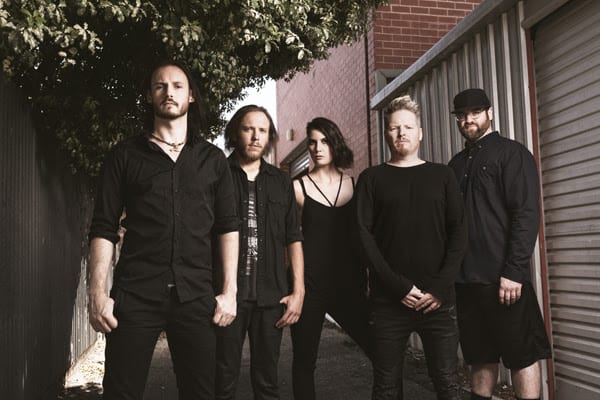 Melbourne’s prog/rock lords and lady, FIGURES, are today releasing the first taste of their forthcoming EP, CHRONOS – which will see it’s international release on Friday June 16th. The massive, riff-heavy track, Recoil, comes along with a video and is dedicated to the memory and tragic loss of their friend and fan, Mick Mills, to Lymphoma.

Jen Fletcher, bassist for the band, wants the world to know this one is for him. “‘Slick’ Mick Mills was a close personal friend of the band since meeting Simmo and Josh through work years ago.  He was diagnosed with Lymphoma in September of 2016. He died only 9 months later at the young age of 27. He was a great guitar player and like a little brother to Simmo, who wouldn’t be the guitarist he is without those countless hours jamming together. His favourite Figures track was Recoil and he was always front row when we dropped it. He was a proper fan, we never want to forget him and what that song used to make him feel. RIP ‘Slick’ Mick, we’ll miss him but we will never forget him and this video clip was never released in time for him to see it. Guaranteed if he had have seen it, in true Mick style he would have most certainly lost his shit.”

The EP will see it’s release on Friday June 16 and will be available for pre-order from this Friday May 5th, with Recoil as the instant grat track for fans upon pre-order.

FIGURES is a band not interested in subtlety.  The Melbourne 5-piece delivers a torrent of blistering riffs expertly paired with inspirational and extremely memorable melodies.  They have complete authority over their brand of melodic hard rock, standing out against Australia’s backdrop of rising heavy bands as THE act to watch in the next year.

Exploding onto the scene in 2014, Figures has made their mark on critics and music lovers alike and while Australians are fervently getting behind Figures, brethren in the UK and Europe are not far behind.  The debut self-titled EP has received 100% positive reviews around the globe with a common theme of hot anticipation for what is coming next.

Well, the wait is over.  The sophomore EP, Chronos, arrives internationally on June 16th 2017.

Featuring more of the snarling grooves and ear-pleasing refrains that is signature Figures, producer Luke Cincotta (Dead Letter Circus, Airbourne, Karnivool) has expanded the sonic spectrum, adding depth and detail to the follow-up record.  The release will be supported by an Australian tour in the second half of 2017.  In the words of Rod Whitfield writing for metalobsession.net:

“…live, they grow another set, and become a vicious, snarling, but melodic and ear pleasing beast of a band with an enormous tsunami of sound”.

Figures is undisputedly relentless in delivering their pounding alt-rock grooves.  Their stage presence is utterly captivating and Mark Tronson’s striking voice soars over the top with ease.  Having featured on live lineups alongside Aussie prog leaders Caligula’s Horse, eclectic metallers Twelve Foot Ninja and rock icons Superheist, Figures are expediting their passage to dominate stages across the nation.

For more information, go to facebook.com/figuresbandofficial