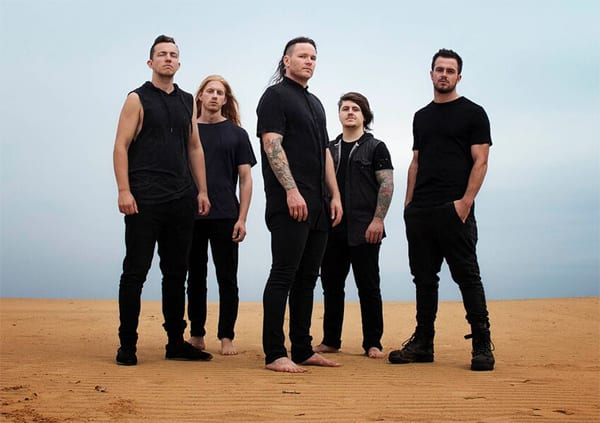 The road towards the release of As Paradise Falls’ new album begins today with a first step – releasing their new single “Star Blind”. The track features brand new vocalist Shaun Coar (Vessel Born, Touring Vox for Feed Her to the Sharks, Bound For Ruin) and is a biting critique on the culture around “celebrities” in the modern era.

The band have clawed their way back from an immense tragedy in that they lost their guitarist Glen Barrie – who passed away in the studio in Thailand while recording the album that Star Blind will be a part of – in 2015. Barrie’s guitar takes are left virtually as played on the single and the record as a whole.

The stunning video premiered at Metal Hammer yesterday and experienced a huge response online as well as a spin on The Racket last night. The video was shot on location at Rainbow Beach at the Sunshine Coast using drone cameras. The clip was created by Third Eye Visuals.

The Single STAR BLIND will be available for purchase and streaming now in all good online outlets.

Songwriter and Guitarist for As Paradise Falls, Danny Kenneally, says of the new single, “The song Star Blind is meant to explore the culture of celebrity in western society – in recent years, thanks to the advent of social media, the traditional model of what “famous” is or was has changed by epidemic proportions. The idea of fame hasn’t always been seen as such a high goal to so many people. But what was a sometimes blurry line between fame and infamy is now pretty indistinguishable by people who seek validation in a world where it’s so hard to find value in themselves. In the current modern digital culture, we need to value substance more than ever.

Add to this, an East Coast “State of Origin” type tour with Sydney’s Trojans and Melbourne’s Mirrors and As Paradise Falls have a lot going on for the forseeable future.

In November 2015, while As Paradise Falls came towards the end of recording their debut album at Karma Sound Studios in Thailand – the band were invited to support I Killed the Prom Queen in Bangkok. Tragically, the night before the show, guitarist Glen Barrie suddenly passed away in his sleep, leading to a halt in progress to give each member time to grieve the loss of their brother.

With a renewed drive and passion for their music and the band as a whole, 2017 brings back a reformed yet determined As Paradise Falls carrying an album full of their best work and the late Glen Barrie’s best work.

The band has recently announced new additions to the band such as Jimmy Upson on guitar and their latest update, Shaun Coar on Vocals (who recorded the vocals for this track and the album with Adam Merker) bringing an extra dimension to the band. Working with producer Shane Edwards (Trophy Eyes, Hellions, Northlane, Hands Like Houses) at the world renowned Karma Sound Studios, this lethal combination of passion, creativity and love for Metal has created a genre defying album that will re-define what you thought you knew about As Paradise Falls.

As Paradise Falls’ new single STAR BLIND will be available for purchase and streaming in all good online outlets on Monday 27th February. Tour Details can be found at collisioncourse.com.au/tickets.