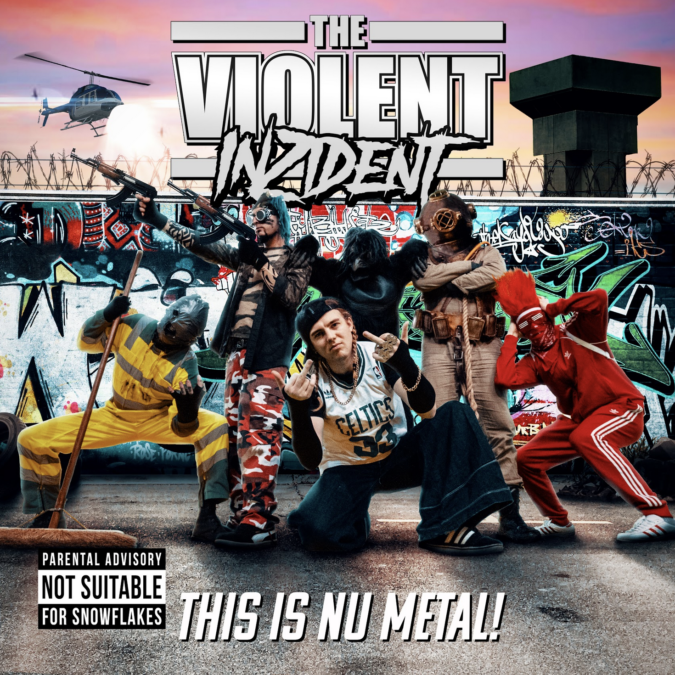 With the music world embroiled in turmoil like never before the time is ripe for a new musical entity to take over the airwaves.

An outfit that embodies everything good about music and one that refuses to take a back seat to ANYTHING.

In an era where all seems lost and the future looks bleak, the music community requires saving like never before, and from the ashes of potential oblivion, a new metal outfit is threatening to rise.

An outfit that comprises members such as General Jerkhov, Adidasshole, Tiny D, Binman, Monkeybird and C-Man; names which, while not a household feature just yet, threaten to explode in such a way that their name – The Violent Inzident – could soon become more commonly uttered than COVID 19.

They are a band with a simple plan to dominate your very musical essence and promise to do so whether you invite it or not.

After news tentatively broke on Facebook a couple of weeks ago, HEAVY tracked down General Jerkhov (a.k.a Andre Joyzi from Breed 77) and his sidekick Tiny D to deliver a barrage of questions which were met with scepticism and contempt in some quarters but will serve to outline the second coming of a musical enigma that will bow down to no man.

“There is no secrecy involved with this band,” spat General Jerkhov when pressed on details. “We just didn’t exist before, and now we do!”

Which is the first indication of the musical direction The Violent Inzident will take.

They are said to be the world’s first-ever Post-Nu-Metal supergroup, and possibly the best thing to ever come out of the U.K. With a blending of rock, hard rock, metal, rap and nu-metal, The Violent Inzident promise to re-invigorate the nu-metal genre one song at a time. Their goals are relatively simple but should prove to be ultimately effective.

“The tourists got over nu-metal in 2002,” explained Tiny D. “Not us. We looked inside ourselves, got some really expensive therapists and totally got over all of our daddy issues and breakups and shit. When you take away all the bullshit, you’re only left with the distilled gold nuggets of brain ideas, you get me bruh? Some ‘experts’ think we never grew up, but they can suck it.”

“The real reason,” clarified Tiny D, “is because they are all ugly and everyone knows pretty boys can’t play instruments. Look at Slipknot or Kiss when they took their masks off… it was pretty grim!”

When I point out that from photos I have seen the two very people I am speaking to now are the only two members of the band to be mask free, Tiny D’s tone softens.

“We are the heartthrobs of the band, obviously,” he purred. “Some people will think that means we’re not talented as fuck too, but they can suck it. I’m not ugly as fuck…AM I?!?”

“You’re pretty in an interesting way,” Jerhov comforted him, which thankfully seemed to settle down a potentially troubling point of the interview.

Desperate to get to the bottom of the whole identity thing, I press Jerkhov on whether the band is worried, given the fact the masked members are actually high profile members of existing bands, that a diehard fan might recognise them by a distinguishing feature, thus destroying the mysticism the band has worked so hard to create.

“They basically don’t want the rest of the members of their respective bands to be jealous that they’re doing something better,” Tiny D interrupted. “When this shit goes global they can suck it. They’ll probably queue up to do it actually because all the guys in the other shitty bands will want to get on the old Inzident Train if you know what I mean. We could have some mime playing a beer keg or some shit. I’m pretty sure it’s never been done before because we’re pioneers of this shit bro.”

Sensing I might be wearing down their armour, I attempt to trick Tiny D and Jerkhov into letting slip with the identities of the other members, but to no avail.

“Yeah, yeah, the deep-sea diver is the Slipknot guy with the child snatcher nose,” chimed in Tiny D. “Get this, it’s a costume inside a costume, so it’s quite a new concept. No motherfucker has done this before. People are going to rip this shit off and make it out to be their good idea.”

“The Adidas guy is Steve Harris,” Jerkhov threw in.

“And Monkey Bird is an actual monkey bird, it’s not a costume!” continued Tiny D. “This music is about freaks, so we got an actual live freak. Like, a fucked up monstrosity. They told us they were born on this military base in Argentina and had to smash their way out of a tank to be born, or some shit.”

General Jerkhov is reportedly the ringleader of this group of musical reprobates and has spent the last four years assembling the pieces that would ultimately become The Violent Inzident. In what has been a labour of love, the truth behind the mission is testament to the current world musical climate.

“Slipknot are a pop/rock band now,” he said, “and Fred Durst looks like my dad when he was 53 years old. We think the world deserves better.”

“We needed four years because we needed to make sure this was the best music ever played and recorded by mortal human beings,” added Tiny D, “which is what we pulled off. So yeah suck it.”

I was privy to an advance copy of the album before the interview, and while I can whole-heartedly back up each of the preceding statements from the band, one thing that stood out above all others was the musical diversity between each song. Some of the variations were more subtle while others were marked in their difference so I decided to press the two band representatives on whether this was a pre-meditated decision going into the album.

“Absolutely,” answered Tiny D, “all of the bands that inspired us are shit and old now, so we thought we’d kick all their asses in just one album. We’re just a bunch of dudes jamming and shit was flying left and right, some nu-shit, some post-nu shit, and when you’ve got a bunch of world-class geniuses with the know-how you can all throw enough shit at a wall to make something that looks like a goddamned masterpiece. Even if it is made out of everyone’s shit, you know what I’m saying, bro?”

Humour is obviously going to be a large part of The Violent Inzident’s look and music, which begs the question of what was more important in the writing process, the humour within the music or the music within the humour?

“Everything we do is so great and incredibly funny that it just came together naturally,” Jerkhov shrugged.

“Like if it ain’t funny it ain’t dope motherfuckin post nu shit man…” Tiny D cut in, which enticed a sideways glance from Jerkhov.

“What are you on about?” he almost shot.

“I dunno man, I thought this was some serious shit?” replied Tiny D. “I dug deep to make this record bruh.”

With the first single “Nu Metal” set to drop on October 23, followed in quick succession by “Triggered” on October 30, the world is finally getting ready to hear the first new music from this band that is sure to change the metal landscape as we know it.

“Everything you need to know about the band, you’ll find out in “Nu-Metal,” promised Tiny D. “It’s nu and its metal. What’s not to get bruh? It’s a reflection of our artistic soul-container.”

“Yup,” added Jerkhov, “and “Triggered”… people are pussies these days and get offended by everything so we thought we’d try to offend everyone in one go!”

“Yeah man, it’s some pretty offensive shit,” continued Tiny D. “Some people told me I’m just lashing out because I’m an insecure man-child, incapable of dealing with progress in a changing world, but I don’t censor myself for nobody, and they can all suck it.”

In fact, the band’s debut album This Is Nu-Metal is complete and ready to go once the euphoria of the two lead singles settles down, but with a bold title like that are the band confident the music will back up the proclamation?

“We have a song called “Nu Metal” and we are playing nu-metal but we know that people are stupid and you, Kris, seem to be no exception,” Jerkhov so eloquently explained, “so we thought we better call the album This Is Nu Metal to make it easy for you.”

While all of this sounds fantastic and on the surface appears to be a revolutionary new addition to the world of music, it also sounds eerily familiar to a band by the name of Steel Panther. I broach the subject as delicately as I can, knowing the ensuing tirade may not be worth actually asking the question.

“Define allegation dude?” yelled Tiny D when I mention the inevitable comparisons will come. “I can’t answer that shit without my lawyer. I was part of a ‘Violent Incident’ if you catch my drift so I gotta keep my nose clean if you follow me, bro?”

“Steel Panther only have one topic and one joke,” chimed in Jerkhov. “They’ve been making the same joke for 10 years, but we’re much better and much funnier. It’s the same thing like grunge killed glam the first time round: Post Nu-Metal will destroy Post Glam sissies Steel Panther.”