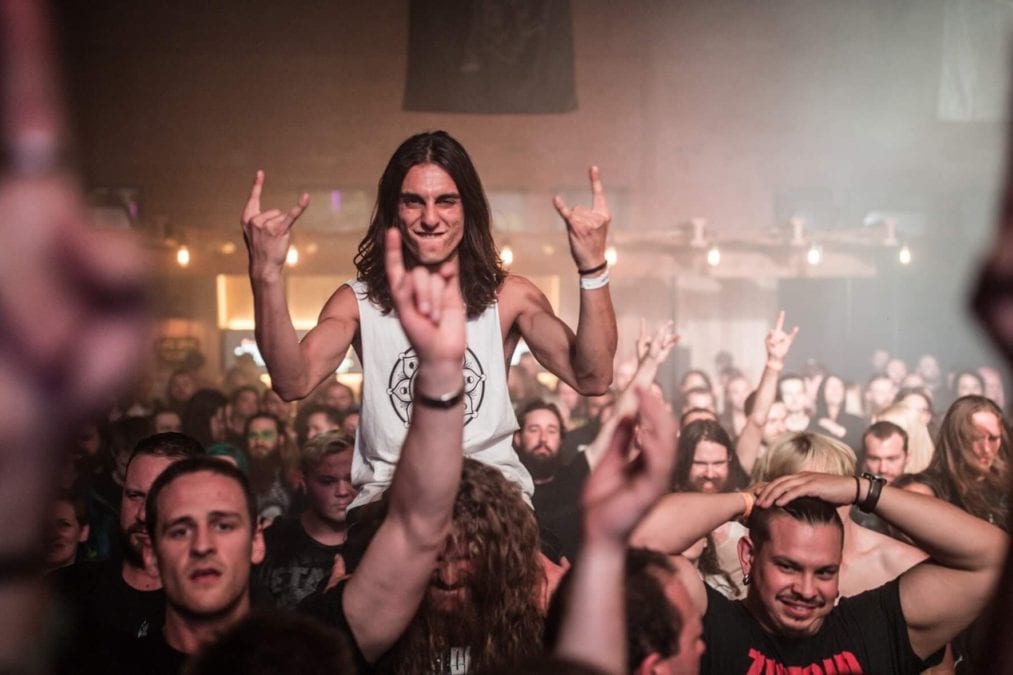 As I look down toward the Adelaide hills flying in from Sydney and about to land, I feel elated to be back in this great heavy metal city! I make my way to the hotel, passing many impressively built churches (ironic really), colonial-style stunning homes and extremely flat landscape of the Adelaide city. The little pangs of excitement in my tummy feel strong. Tomorrow is New Dead Fest 2019, which will consist of a brutal display of 19 bands from Down Under in a frenzy of black death, thrash, and extreme metal and headlining the festival is the mighty Fleshgod Apocalypse. A festival that is set to span for a whopping 12 hours, this is going to take some staying power and endurance. So, I turn in for an early night and save my survival skills.

New Dead Fest 2019, is the 10th festival under this title and has once again been created, coordinated and put together by Jason North, who also fronts the deadly Adelaide metal band, Truth Corroded. This, the first time being held at Lion Arts Factory and from the eye of someone who doesn’t work in events management, it seemed to go off without a hitch. In fact, I would go as far as saying it was exemplary by way of organisation. Helping Jason was Korno and his crew from Korno’s Concert Services, who worked tirelessly throughout the day to ensure the program went off without a hitch. The crew behind Kornos Concert Services was quoted by Jason North as “the unsung heroes of the day”, and I say good call!

Festival Day! And true to form, punters were lined up from 12 pm to get a spot to see the first band to kick this festival of at 12:15, Adelaide’s own death metal outfit As I Destruct. This was a special set indeed for the band and fans alike as this was their final show with guitarist Matt Maroitti. The boys were in their element, and pulled together to see Matt out with a heavy bang playing an aggressive and weighted as hell set, one that laid the foundation for a killer day as they bashed out tracks from their latest album ‘From Fear To Oblivion’.

To follow them, was the evil appearing and brutal sounding, Altar Defecation. These Adelaidiens’ know how to bring the darkness to the stage and lifted massively with a super blackened set blowing everyone away with their composition as Demoness Blackheart screamed and growled her way through the set and the band gave it their all. More punters continued to roll in and the venue started to fill fast.

Making their way across from Melbourne was Primitive, taking to the stage with their raw and no-frills metal, ensuring heads were banging and bringing a realness to the stage – they just went for it, and played with gusto. Following Primitive was local extreme metal band Shatter Brain who always seem to get the crowd going with intense high vocals and heavy breakdowns as these lads belted out catchy heavy tracks with snug rhythms and cool grooves. Battlesword SteelMaster took the stage next with what can be described as 80’s metal gimmick attire, however, they are no joke, knocking it out the park with humour yes, but more to the point with a serious display of metal musicianship. These guys were such a fun and old school metal act to watch.

On the back of their return from a recent tour of Japan with Fleshgod Apocalypse were local heavyweights In The Burial. Wowing the crowd and making their hometown proud with their theatrically intense and symphonic brutal blackened death sound, as vocalist Mel Bulian sent goosebumps up the necks of all who watched her guttural and scream tracks off their latest album ‘Lamentations: Of Deceit and Deception’. Such an intense set by this band, a huge and imposing sound created and displayed for us all to enjoy with wide eyes. This entire band always feels so in sync and flawless. Just fantastic!

Give us Thrash Metal and did they ever! Brisbane band, Asylum gave it their all with a fan-bloody-tastic performance showcasing some incredible shredding skills by the lead guitarist, and an overall full-throttle thrashing set that felt relentless in its delivery. To the next room we move, to see the second Melbourne band of the day, Eye Of The Enemy who had the knack to pump the crowd up with their amplified melodic death metal sound while enticing the crowd to start up a hectic pit for beer bribes (of course). It’s not before too long we are back to the smaller stage to see the lads from the Adelaide Hills, Alkira put on a heavy and energetic show, highlighting their roots in old school thrash metal. I take a moment to look around at my fellow metal revellers and could see how warmed everyone was, beers were flowing, everyone happy and in their metal element, banging their heads to Alkira’s fast-paced and strong metal.

On the main stage, punters were gearing up for the highly anticipated performance by Sydney orchestral death doom metal band Rise Of Avernus, and this being their debut show in Adelaide. They certainly did not let anyone down, and brought a suffocating dark power with them, with huge imposing vocals by ‘Ben VanVollenhoven’ and intense blackened shrieks and screams from Mares Refalaeda. This quartet sounded off a heavy metal creation with doomful heavy riffage and overall strength. They certainly were on everyone’s topic of conversation this night and rightly so.

Travelling from Perth was death metal brutality Xenobiotic, who claimed their slot at New Dead Festival with huge bloody conviction! These boys played so damn hard, breaking necks all over the stage and on the floor, with substantial breakdowns, extreme vocals and imposing stage presence. It’s on now for Melbourne band Earth Rot as they go to battle and stain the stage with their large sounding set full of deadly blackened death metal and choice crowd interaction. These lads always give it their all and they certainly didn’t come to New Dead Fest to pick strawberries.

Local Adelaide favourites and Aussie thrash metal heavies, Hidden Intent, put on another killer set showcasing tracks off their latest album, ‘Fear, Prey, Demise’. They led the way in creating some of the most hectic pits of the day! Encouraging people to take care of their mates and pick them up if they fall, and yes, many fell. These chaps are always fun, always loud and always thrashing!

Jason North owned the stage next with his thrashy/death metal band, Truth Corroded. A band who is a class act and who brought the furry with them this day spewing out tracks off their latest album ‘Bloodlands’ as the crowd thrived on it! Then, The Levitation Hex was up for their first show in two years. The boys have not lost their progressive and extreme metal fire, bringing a strong game to the stage. The Levitation Hex was the only metal act from Canberra to plague New Dead Fest and they certainly did the ACT proudly!

Abramelin came to ruin us and they succeeded. These lads are back putting on strong performances after some time off, and having just completed some killer tours with Dark Funeral, they certainly brought their raw, rough and ready show with them to New Dead Fest! Abramelin was an act not to miss and just played so damn hard with no-frills metal, and a huge heart! True old school death metal at its finest and a band who were clearly enjoyed by all. 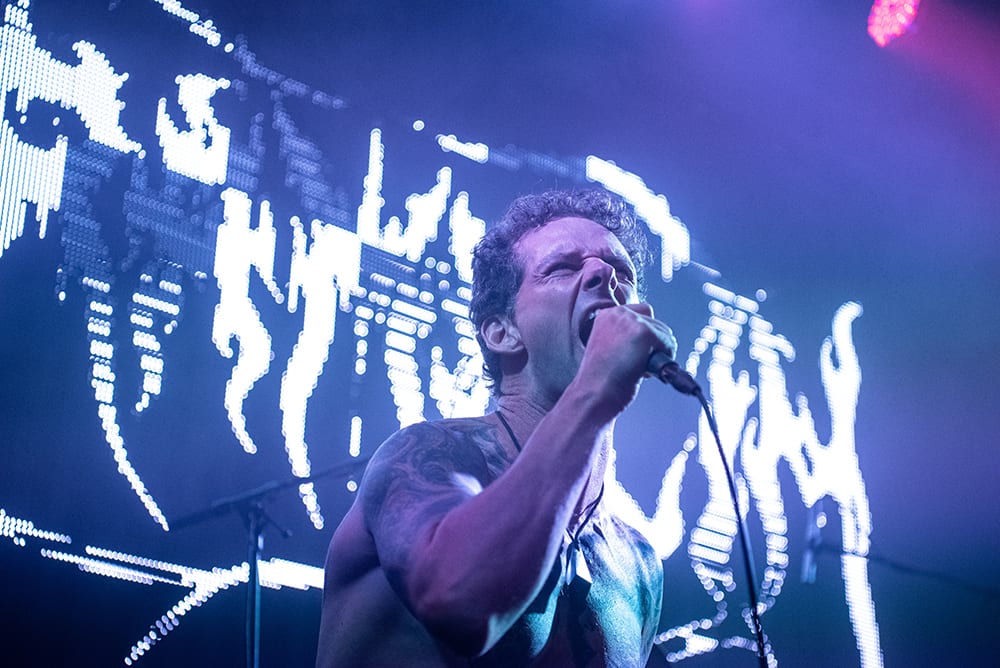 Up next was DSBM band Deadspace, hailing from Perth. The emotion bestowed on the crowd by Chris Gebauer was incredible, as he growled and screamed his lyrics toward us with disdain, pain, and power. The band’s atmosphere and the performance in all of their entirety were executed excellently, concentrated and severe.

King Parrot graced (hmm this word should not spring to mind when thinking about King Parrot) the main stage. As they sunk tinnies of VB (of course), shirtless while bashing their instruments, and creating intense moshing. Even at one point calling for sickbay for a young metalhead who ended up proudly wearing a mosh pit induced bloodied nose, and later being invited up on stage for hugs. These lads are certainly big characters of the Aussie metal industry and played a gruelling set.

Orpheus Omega was incredibly entertaining with a strong and extreme presence on stage, creating some of the best hand banging I’ve seen in a while. Melbourne brought a strong team with them to New Dead Fest and these guys were no exception, with heavy riffage, brutal drum tracks, and relentless vocals. A large and entertaining set.

Last but not least, to finalise this 2019 New Dead Festival chapter was the Almighty Fleshgod Apocalypse and as to be expected, this band is world-class. Such a strong and colossal sound produced by these Italian giants with a stunning display of soprano operatic vocals by the beautiful Veronica Bordacchini contrasting the large and unforgiving gutturals delivered by lead vocalist Francesco Ferrini. This was a stellar International ending to what was an epic display over 12 hours of home ground Aussie metal.

Waking up the next day somehow only mildly hungover, stiff hamstrings, sore calves and wondering how the hell I ended up losing my mates and not getting to say goodbye, I did feel extremely satisfied with the entire experience of New Dead Festival. From the impressive calibre of bands, the well-organised festival itself and of course the amazing metal community who turned it on from Adelaide and the many who had flown interstate to participate and enjoy this day. Everyone there that day made New Dead Fest an incredible day! We Can only hope this monstrous event takes place in 2020 and well into the future. 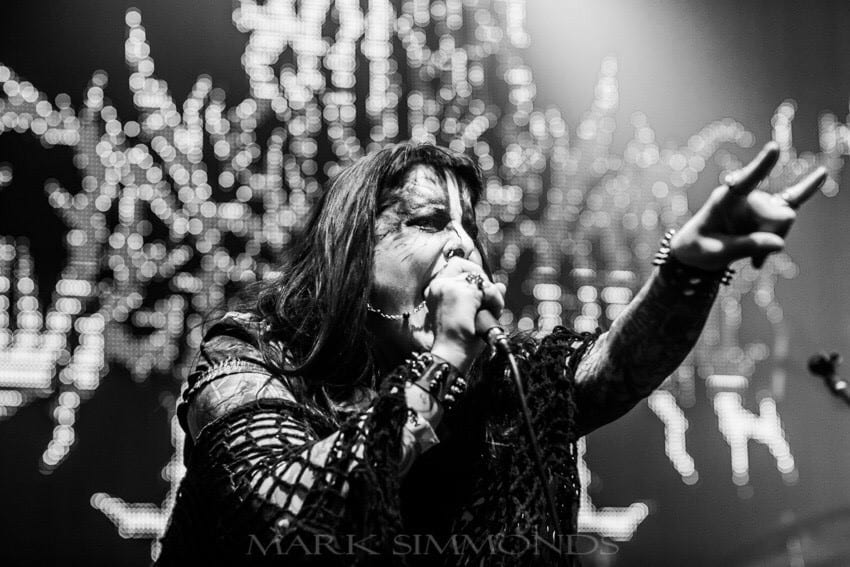 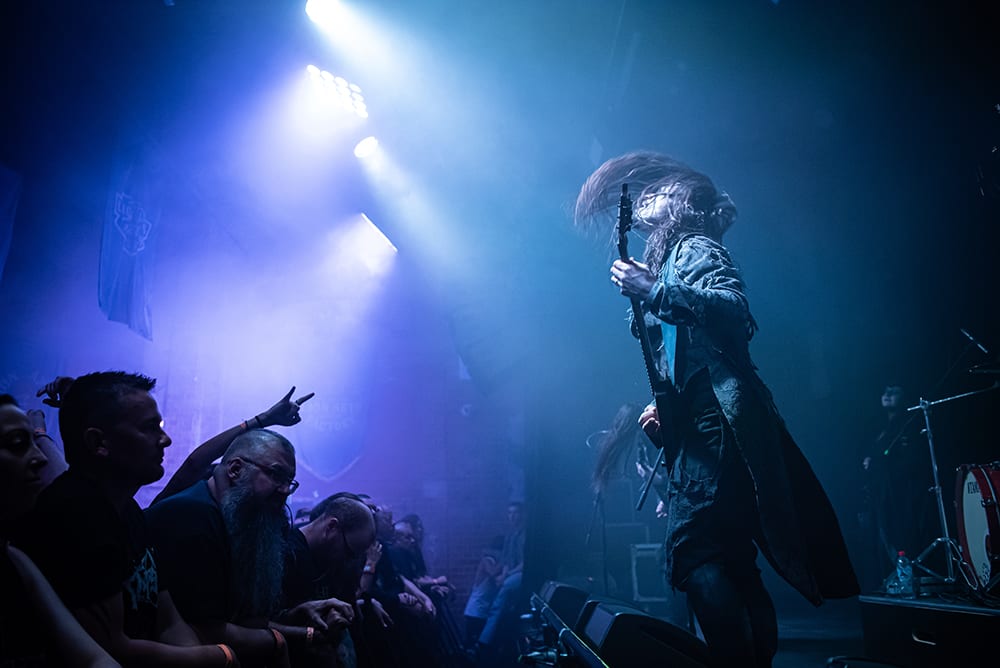 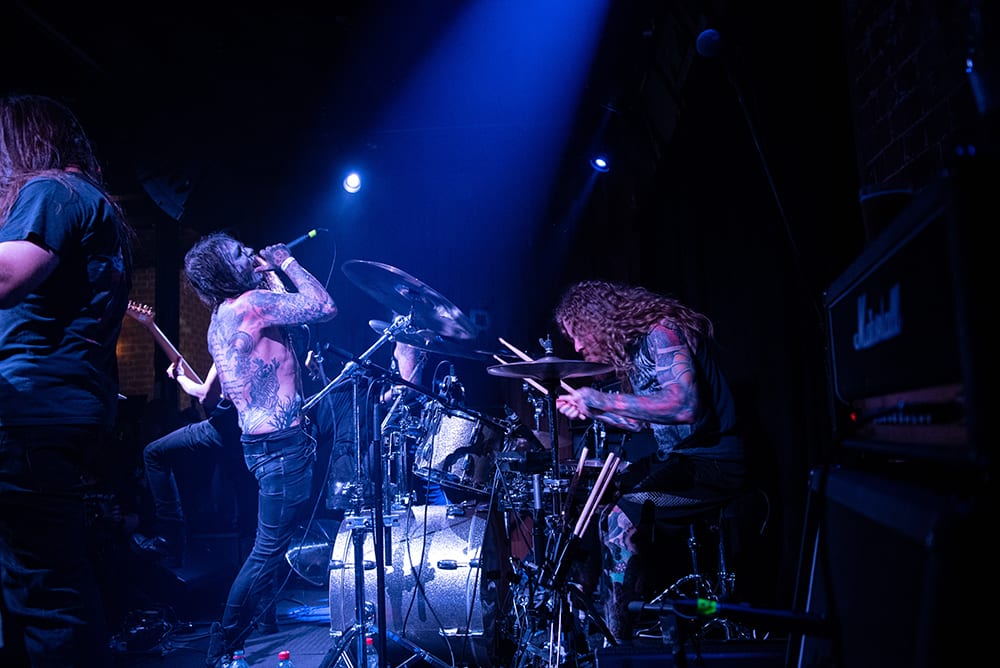 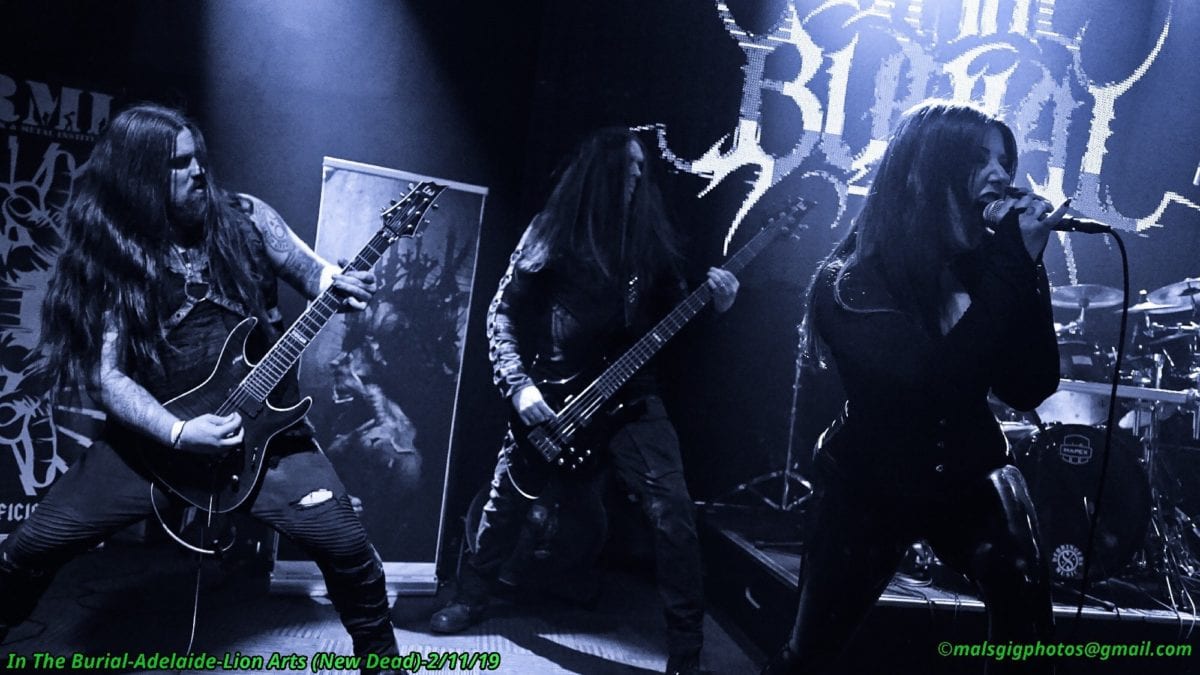 In The Burial photo by: Mal Caporn 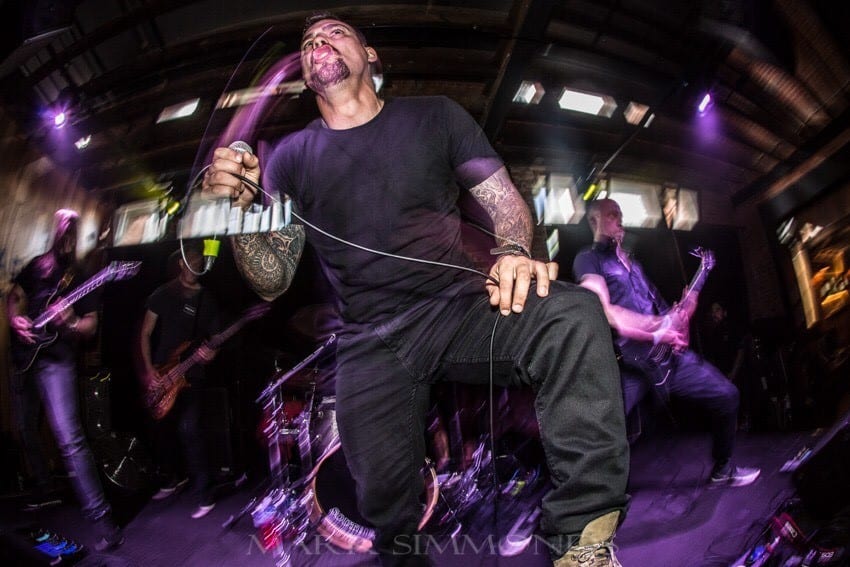 As I Destruct photo by: Mark Simmonds 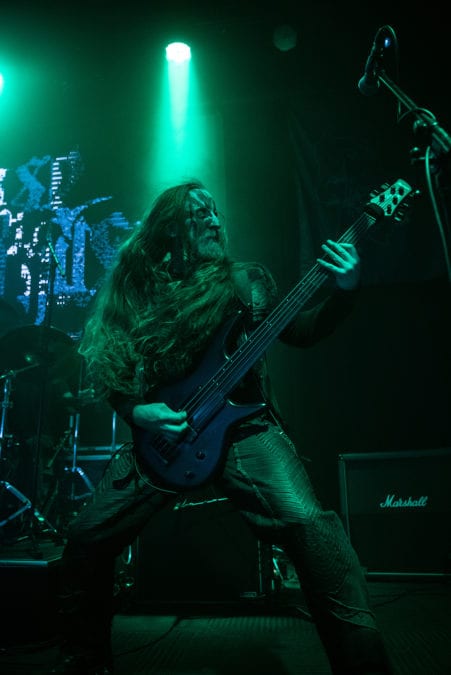 Rise Of Avernus photo by: @alyshamallia