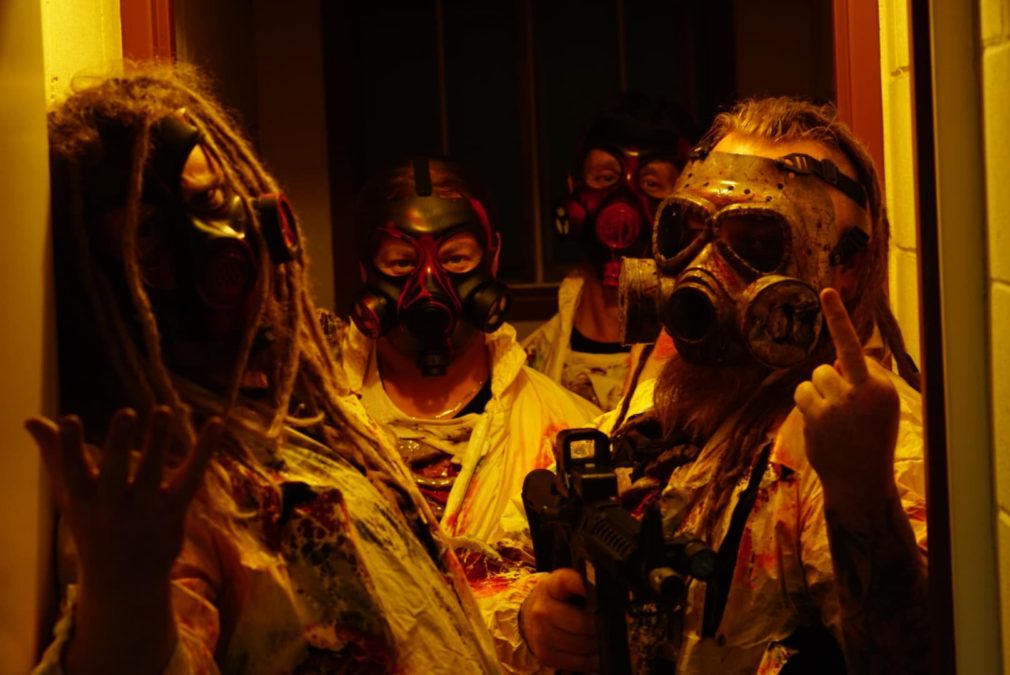 Sunshine Coast band New Clear Vision have sadly officially announced their separation, with a farewell show planned on the Gold Coast this weekend.

Since 2015 the band have played with and alongside some of the best local, national and international band’s in the business, winning over a loyal legion of fans and forging many friendships along the way.

Frontman Brad Bromfield is no stranger to the music scene, having previously been with Messiam for a number of years, but this larger than life character has also been through good times and bad for the love of his art and sat down with HEAVY earlier this week for a chat about the break-up and plans for the future.

In a sometimes emotional conversation, Brad opened up about his feelings of the end of another musical relationship – which is what being in a band is – and answered quite a few tough questions that were difficult for me to ask but even more difficult for him to answer.

This is an interview everyone should listen to – musician or not – to give you a true gauge of the human side of these people that many of us only know from their stage persona. Things can, and often are, extremely difficult and take their toll physically and emotionally with often the person dealing with these demons having to do so alone.

Big thanks to Brad for his honesty and conviction.

I started by asking how he was feeling about the reality of this weekend possibly being the last time New Clear Vision perform together on stage.

As to why the band are ceasing, the reason is refreshingly simple, yet still obviously hard to talk about.
“CJ (Nash, drummer) moved down the Coast basically,” he measured. “We knew this in January before Covid hit but that shit stormed everything we had planned to farewell it. We had shows and were gonna run things out which would have been pretty awesome but then Covid hit and shit hit the fan so all of them shows went and CJ moved to the Gold Coast so yeah, that really. There’s no underlying anything, just separation. Shit happens and made it really hard. We had to travel to Caboolture and he had to travel also which was hard. I can only wish him well. We’re still close which is good.”

New Clear Vision were a band that had to be seen live to fully appreciate, and one which, although gaining some form of success on the local front still fell far short of reaching their potential.

“No, fuck no, no way,” Brad agreed. “We were together for six years but we’ve only been out doing live shit from 2016 to pretty much the end of last year. We were only hitting our straps which fucken sucks. That’s the hardest thing. I’ve already done that shit with Messiam before but we got further than we did with them.”

Believe it or not, musicians feel the same as everyone else, sometimes harder. Losing a band is like losing a family and quite often respective members become down to the point of depression despite putting on a brave face.

Brad is no exception, with the pain of the band coming to an end evident in his voice.

“Yeah I deal with those things like depression and anxiety as many musicians do,” he confessed. “People in the arts always do a lot because I don’t know if we’re taken seriously half the time. You do, you put your entire life into it – you know that because you talk to a lot of people that do bro. It fucken crushed me mate and I know it’s disappointed the boys too… It weighs heavy bro, especially when you get a bit older, you can’t be doing this shit forever…”

In the full interview, Brad discusses his feelings in greater depth, hints at future plans, explains the drama attached to this weekends performance, some of his greatest achievements as a musician, people he has met along the way and more.

Earlier in the week HEAVY reached out to some of Brad’s friends and contemporaries in the music industry and got these words of thanks and encouragement. Big love to everyone for their honesty and respect…

CJ Nash (New Clear Vision drummer) – “I’ve worked with Brad for over six years now. I owe so much to the guy. I wouldn’t be the person and musician I am today without him.”

Matt Young (King Parrot) –“Brad’s a top bloke and a passionate and committed frontman. I have known him for many years and he is a fixture on the Sunshine Coast scene. He has always been helpful and hospitable to King Parrot and myself and does it all with a smile, Bloke’s like Brad are the heartbeat of the Aussie music scene. We love ya brother!”

Joel Thompson (Kaosis) – “Brad has that kind of magnetic personality that openly embraces you with genuine love and kindness. He is as authentic as they come – a salt of the earth king among men. He strives for the best and his persistence has seen NCV achieve huge feats in a very short period of time. It is with unbelievable sadness that we hear of NCVs’ disbandment. Ripples of mourning reach us across the Tasman and we feel that this should be the dawn of a new era of NCV and not the end of a great band created by a legendary metal toa. Kia Kaha Whanau New Clear Vision.”

Jesse Dracman (Darkcell) – “New Clear Vision was just a damn fine band of good dudes, but Brad gave not just quality to his performance, but his spirit was infectious through his band and one that transcends beyond the stage. Playing with NCV has always been a blast, and I cannot wait to see what’s next for Brad. His drive and work ethic is second to none, and any band would be lucky to have him.”

Lance Jones (Diskust) – “He is my brother with a heart of gold, a musical genius and a deadset good Cunt.”

Mitch Matheson (A Somerset Parade) – “I’ve enjoyed playing gigs with you champion, you’ve always reached out and said Gday! Good luck mate. From me and the ASP lads.”

Alexis Tajlia – “New Clear Vision, the Brisbane band born from legendary guys who give their music every drop of passion they possess. Every time I’ve seen them live or shared the stage, I’ve always been in awe of the way they rouse a crowd, their sound and the effort that goes into their outfits. It’s raw, sweaty, authentic & heavy music at its very best. They come at music with honesty, integrity and a no bullsh*t approach that I love and respect. Forever & always an NCV fan. ”

Neville Pearce (Snake Mountain) – “I have played many shows with Brad over the years and his drive and passion for his craft has always been inspiring, not to mention he is one hell of a frontman and intimidating to witness, he’s one of our best in the scene for sure.”

Chad Ellis – (From Crisis To Collapse) – “Brad’s performances with NCV were always delivered with honesty, integrity and energy, that matched his larger than life off-stage persona. A bloke that shows unparalleled commitment and wears his heart on his sleeve, Brad will always be the epitome of the local SE QLD heavy scene!”