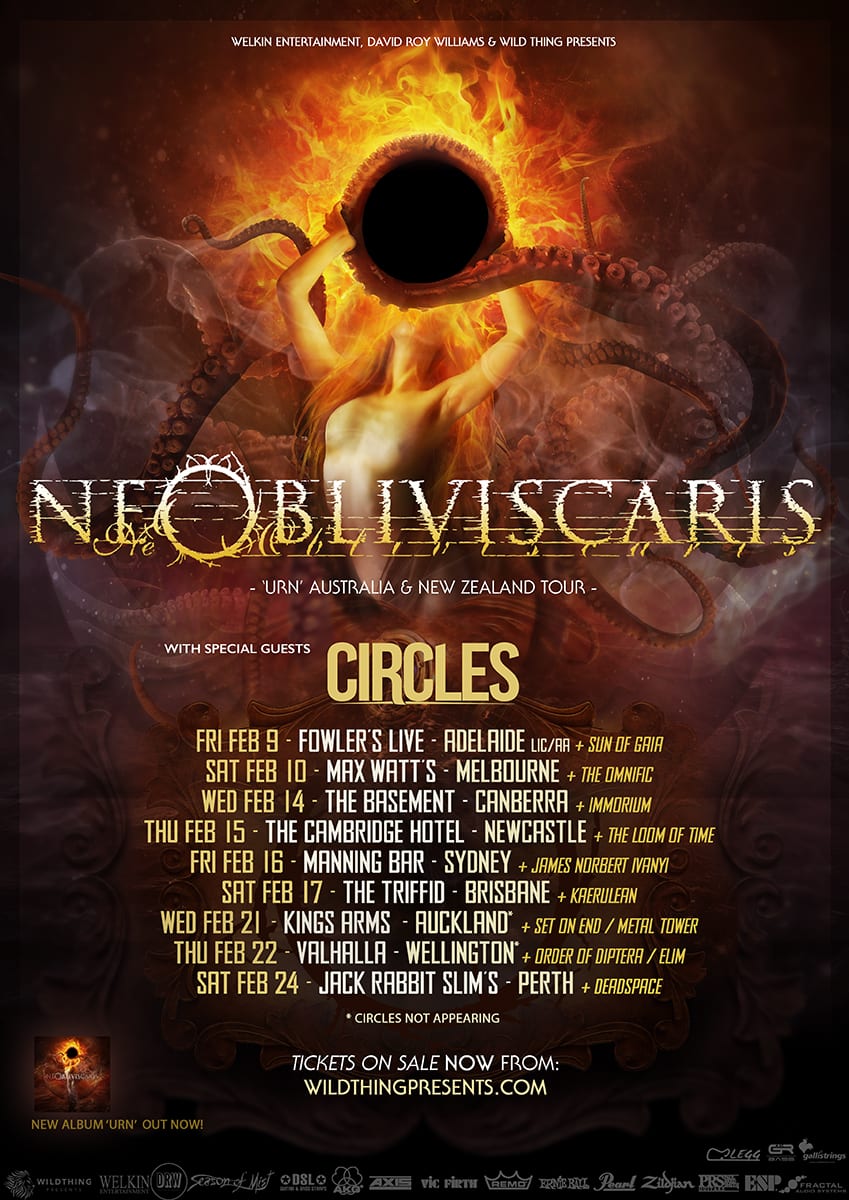 Australia’s foremost Kings of progressive, extreme heavy music, Ne Obliviscaris will be touring across Australia and New Zealand next month in support of their new album Urn!

Today they are excited to announce the local bands in each city who will be opening each night.

Kicking off in Adelaide, Sun Of Gaia will showcase their progressive blend of melodic death metal infront of an eager crowd at Fowlers.

Melbourne metal fans will get an extra dose of bottom end as The Omnific hit the stage with not one, but two bass players! No guitar, just two basses and some thundering drums.

In our nation’s capital, Immorium are primed to deliver a set that drips with originality. Drawing influence from multiple heavy genres, they deliver a full spectrum of emotive music that appeals to all.

Hailing from the NSW Hunter Valley, The Loom Of Time will step into Newcastle to deliver a set that’s bound to have the locals visiting wine country to track the source of their molten metal.

Sydney guitar superstar, James Norbert Ivanyi has been on a near vertical career projection over the last two years. His instrumental guitar histrionics have seen his fanbase grow all over the globe.

In Brisbane, progressive, symphonic death metallers Kaerulean will add a touch of orchestral majesty early on in an evening filled with heavy metal theatre.

Over in New Zealand, fans will treated to two awesome locals at each show.

In Auckland, it’s progressive groove merchants, Set On End and the most brutal Metal Tower.

In Wellington, purveyors of dissonant, tech death, Order Of Diptera will be offset by ambient noisemakers Elim.

NeO spent most of 2017 preparing for the release of Urn and this will be their first ever appearance in New Zealand, along with the first time playing to their Australian fans since December 2016 when they closed the door on their epic Citadel album campaign which saw them perform to tens of thousands of people around the world, in Asia, the Middle East, Australia, North America and Europe, including at many of the world’s biggest festivals, across 2015-16.

Urn is set to be a career defining moment. Ne Obliviscaris have honed and re-balanced the key elements of their unique sound to a razor sharp musical edge.
The dynamic entwining of fierce growls and emotive clean vocals, the contrast between devastatingly intricate guitar riffs and thundering drums against an unleashed violin and gorgeous string parts
as well as the perfect blending of epic progressive and intense extreme metal forms of expression are all marking a new peak in the steep rise of the band.

Urn will take Ne Obliviscaris to the next level. Outstanding musicianship meets excellent songwriting and a firework of brilliant ideas.

Urn is out now on Digipak CD, Gatefold Double-LP in various colours and on Cassette
www.nervegas.com.au/ne-obliviscaris