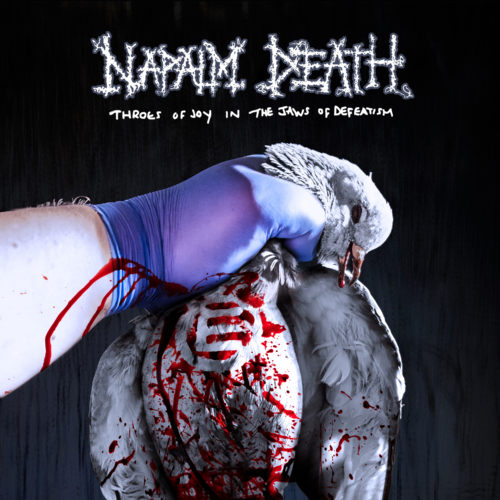 NAPALM DEATH “Throes Of Joy In The Jaws Of Defeatism”

Like all pioneers, legends, GODFATHERS of their breed, the mighty and magnificent Napalm Death need no introduction. True and unforgiving pioneers plus consistent leaders and redesigners of their brand. Napalm Death have never followed a familiar path but neither have they ever strayed from the world of carnage that they single handedly forged within the genre that they have alone engineered, pioneered and continually after almost forty years reinvigorated, regenerated and reforged.

Amongst all other buzzwords and desperate efforts to find anything remotely appropriate to describe Napalm Death and their new album, in plain terms they glisten with absolute purifying disdain in their overwhelmingly unapologetic and uncompromising reason to exist! In the realm of perfection that Barney, Shane, Mitch and Danny reside in is an existence where the follies of mankind’s incessant desire to destroy itself is carrion for Napalm Death and never is that more prevalent or obvious than where we find oursleves now. Their fifteen previous album titles alone prove this; not to mention the crafting of obliterating songs. They have a signature – Shane’s pummeling bass bottom end, Mitch Harris’ finger shredding, fret melting malevolence, Herrera’s ability to keep the Napalm carnage in check and in time, whilst the beast within always colors outside the lines and finally Mr. Barney Greenway’s vice like grip to draw the listener in demanding absolute undivided attention and concentration as he barks and spits delicious vocal malevolence not unlike liquid mercury melting the souls of those he snares in his vice like welcoming disdain.

It doesn’t feel like it’s been five years since the release of the beyond amazing Apex Predator – Easy Meat [2015] which I will proudly confess still gets regular spins in the Metal V household due to its near perfection. Three years prior to that was Utilitarian [2012], and backwards we step at nothing but sheer brutal and classic album after album since their debut Scum. “How will Napalm Death rewrite the next chapter of blistering metal magnificence?” we ALWAYS ask ourselves! Well of course Throes Of Joy In The Jaws Of Defeatism is beyond magnificent and will fail to disappoint the most discerning of extreme music fans. And let’s face it, the reason you’re here is because you’re a Napalm Death fan and only want to know one thing – How does it sound?

Well, Throes of Joy in the Jaws of Defeatism is an unfiltered sonic Napalm classic. From the opener “Fuck the Factoid” on through the next forty odd minutes we the listener are treated to Napalm’s unrelenting sheer sonic clarity akin to receiving a gattling gun to every sense we possess which, is always a good thing.

As music journalists we place high expectations on any new music that arrives and rightfully so! Any band that sticks to a singular monotonous formula is very quickly forgotten about and drifts to the bottom of the pile of listenability, yet Napalm Death, thanks to repeatedly finding ways to rediscover new ways to pummel both themselves and their audience, remain HIGH on rotation courtesy of all four members having an innate ability to remain fresh whilst being the signature noise of every generation and decade that has passed them by. “Backlash Just Because” and “That Curse of Being Thrall” is classic brutal Napalm insanity littered with grooves that just refuse to quit. The latter being that perfect driving an open highway track which would see us doing well over the speed limit in the hope of outrunning the shit that we the slaves of existence can not stop from confronting our lives.

Considering the state of this 2020 “Contagion” is a well placed song that thunders along with a classic Napalm Death sound. And always the masters of experimentation and diversity “Joie De Ne Pas Vivre” is a short, sharp slow hypnotic noise fest with hypnotic four minute bottom end heavy dirge “Invigorating Clutch” bleeding superbly out from it.

Now halfway through the album track six “Zero Gravitas Chamber” forces us back into line and onwards progressing to our happily angry end. Album highlight for me is “Amoral”. This perfect hypnotic song wrapped in perfect discordant, dissonant bliss and one the best extreme metal songs I’ve ever heard. “Amoral” just grips tightly, refusing to let go of our entire core and that is the entire nature of Throes of Joy in the Jaws of Defeatism. From start to finish Napalm Death have released a perfect album that is absolutely to the soundtrack to our now.

Throes of Joy in the Jaws of Defeatism is out now on Century Media.