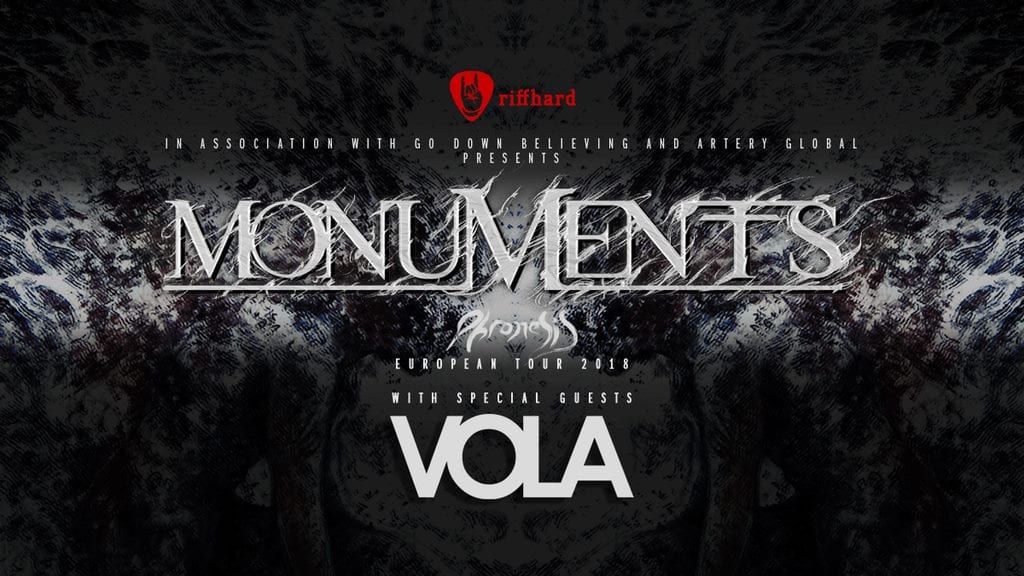 A rainy Friday in North London, truly the beginning of winter is here and there won’t be any reprise until 2019. Except unless you are at the Tufnell Park Dome venue. That’s where the absolute fire is. Returning to London after a few long years, MONUMENTS bring their headline European tour back to the capital, touring their latest album ‘Phronesis’. The London visit is part of an extensive 31 day tour across the continent. London being one of the last shows on the tour. I approach the venue with cautious optimism, expecting great things. The last time I saw Monuments, was in London 2015, following the release of their previous album ‘The Amanuensis’. It was still early for my MONUMENTS experience, but the show sealed the deal. Ever since then I have been a massive fan. The 9th of November show I’m at tonight will either reinforce that fact, or annihilate it.

The massive four band bill poster showcases exceptional talent within this subgenre of djent tech/progressive metal. The first band on the bill, Finnish band ATLAS, come screaming out of the gate, blasting through the auditorium with an infectious, ferocious energy. Frontman Patrik greets the crowd with a solitary ‘London get the f*ck up!’ and from that moment on for the next 30 minutes, we are captivated. ATLAS bring a refreshing take on the metalcore scene, dubbing themselves ‘northcore’, combining the catchiness of modern metalcore with aggressive, visceral Scandinavian vibes. Cracking through their set, Atlas bring the audience on an emotional journey, full of bass drops, stage theatrics and song dynamics. Atlas are definitely one band to keep an eye on in this space.

Having survived the ATLAS assault, the punters are now warmed up and itching for more. A momentary reprise, giving the bands time to change over, the crowd masses towards the bar while (maybe) enjoying the assortment of rap and hip hop classics played over the house stereo. A few bass drum kicks and a little scream from the guitar signal the end of soundcheck, and the start of band two, Kadinja. One by one, the 5 piece French tech-djent crew appear on stage, fists raised in the air to a celestial, low synth rumble. There’s a distinct tension in the air condensing into a choking thickness, the crowd are anxious for the band to start. Then bang, Kadinja launch into their first track demonstrating thunderous complexity combined with dynamic, uplifting chorus structures. Mixing blinding strobe lights with the rhythmic beats, the experience becomes mesmerizing, drawing sweat from the crowd as they pulse and sway under the Kadinja spell. The rhythm guitar plucking pulsating, polyrhythmic riffs harder than a jar of Japanese crosswords, with ultimate accuracy. The band navigate through their biggest tracks such as ‘Til the Ground Disappears’ executed with surgeon like precision through the main riff seamlessly cascading into chunky grooves. The crowd drink up every sway of the guitar pick, stratospheric applause following each song. Kadinja perform their last piece, a ballad type, the band duck down out of sight, a spotlight shines on the one standing performer, focussing our attention to vocalist Philippe who serenades the now heaving crowd through a melodic, then ear-defyingly brutal breakdown only to quieten under the raucous applause from the crowd.

VOLA, the progressive symphonic 4 piece band from Denmark, are up next. The stage is left as a definite mountain to climb following the first two immense performances, but I have confidence VOLA will be comfortable atop those expectations. Vocalist Asger Mygind opens the first track with a subdued spoken piece over dynamic synth fill, the bass kicks in, bassist Nicolai Mogensen’s Warwick 5 string cutting through the mix like a hot knife through coconut oil. VOLA effortlessly crochet a soundscape quilt, weaving fan favourite tracks with bangers from their 2018 release ‘Applause of a Distant Crowd’. Mygind executes precise harmonies with Mogensen, while keeping engaged with the audience. I can definitely see Mygind relaxing into the vibe, his face beaming as he looks out over the (almost) sold out crowd, reflecting so many faces and voices singing his words back at him, there is a tangible relationship occurring before my very eyes. The audience is so engrossed, there’s hardly a cell phone in sight, with patrons choosing to simply experience the moment. VOLA smoothly sew together odd time signatures, melodic passages and head banging beats, drawing out circle pits and screams of joy from the audience. Like a lion perched overlooking his pride, Mygind picks his words carefully, addressing the crowd ‘Everybody good out there?’ before launching into another huge soundscape. VOLA’s set bring welcome dynamics, with tracks such as Ghosts and Alien Shivers, feel like a breath of fresh air… which is becoming more and more necessary as more and more sweat is wrenched out of the mosh pit, the temperature is rising here in the Dome. Myging, and his well groomed hair, a man of very few words signs off the set with a simple ‘big thanks’ before finishing off their last track for the night. Overhearing people around me, the show was eloquently summarised in one word, ‘ethereal’.

The time has arrived. Three amazing bands have risen expectations monumentally. Fortunately for myself and the packed out floor, there was one more monumental performance in store. A few agonizing minutes to wait while the stage was prepared, beers are purchased and spilled, the crowd shifts about, squeezing as many bodies into the centre as possible, as to not miss a single millisecond of the show to come. The lights go down and a retro space theme song comes on, possibly a tribute to a sci-fi franchise I can’t quite put my finger on. The lights come on, with a brightness to rival the sun, instantly followed by a cheer that could deafen the mice in the roof, and the opening track for MONUMENTS’ inaugural number from their Phronesis album, A.W.O.L begins. Guitarists John Browne and Olly Steele demonstrating their effortless prowess over their instruments, tapping the fretboard under and over in an almost nonchalance, carless expertise that they could play these mind-blowingly complicated riffs with their eyes shut. Despite the overwhelming complexity, the band pull together for the breakdowns, Browne and Steele join bassist Adam Swan’s wildly swinging dreadlocks in uniform headbanging, while vocalist Chris Barretto interacts with the audience, singing as if to each one of them individually. Hurling himself into the crowd, Barretto is clearly enjoying himself in his natural habitat on the stage. The unique personality of each band member is crystal clear but together on stage they appear as a unit. Moving in and amongst each other and clearly enjoying themselves. As to the crowd, they are hanging off each word Barretto says, an introduction to the hugely popular track Stygian Blue, ‘This song goes out to anyone who’s having a hard time in life’ and it did, the audience is able to lose themselves in the performance, looking out for only the people immediately beside them, lost in the precise moment. MONUMENTS are clear experts in their trade, the audience appeases all the band’s requests at will creating a circle pit, wall of death and hands up at a single request. Barretto commands the auditorium to get down on their knees, immediately the crowd obeys, only to go bananas when the song kicks in. The genuine connection created between the stage and the floor is something to behold. MONUMENTS ring out the last notes of Regenerate from their debut album ‘Gnosis’, wave, and stroll off stage. However, to the well trained congregation, they know this is only temporary. To no surprise the boys are back on stage for their encore, which Barretto takes a break from the vocals to take a swim in the crowd, leaving the first verse and chorus sans vocals, but possibly 10 times more engaging through his sheer enjoyment of the moment. Before long, the last notes ring out, it’s almost surprising that the set feels like it was over so quickly.

The combined effort of ATLAS, Kadinja, VOLA and MONUMENTS made for one spectacular night. My only concern is now, how are they going to top this phenomenal performance the next time I will 100% be seeing them again.