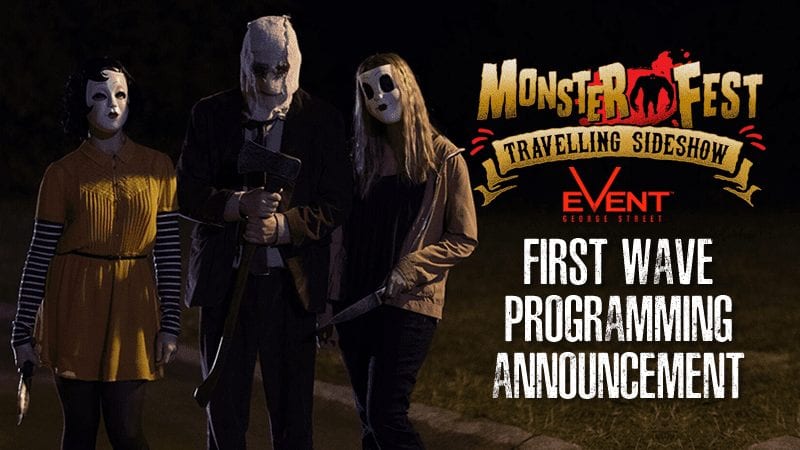 You’ve been patient and we’ve remained tightlipped but now we can reveal our first wave programming line-up for MONSTER FEST TRAVELLING SIDESHOW at Event Cinemas George St Sydney and if the suspense hasn’t killed you yet, we can assure you these films will!

Opening the festival is the Australian Premiere of THE STRANGERS: PREY AT NIGHT, the long-awaited sequel to the terrifying 2008 smash hit THE STRANGERS and the perfect nerve-rattler to set the mood for the festival! Continuing the former film’s stripped-bare thrills, THE STRANGERS: PREY AT NIGHT sees a family of three arrive at their holiday destination only to discover it is completely abandoned – and quickly find themselves terrorised by a group of three remorseless masked killers. If the family is going to survive this inexplicable onslaught, they’ll have to push themselves to their absolute limit.

From international chills to homegrown horror, we’re proud to present the World Premiere of  LIVING SPACE. From first-time feature filmmaker Steven Spiel comes this supernatural chiller about a young couple who are forced to take shelter in an isolated, seemingly-abandoned farmhouse – then battle malevolent forces under the command of an undead Nazi general for their very survival! Including familiar faces like Georgia Chara (WENTWORTH), Leigh Scully (HOME & AWAY) and Andy McPhee (SONS OF ANARCHY), LIVING SPACE is one of the most exciting Australian genre films of 2018.

Next up is MONSTER FEST 2017 ‘Golden Monster’ award-winner,  COLD HELL, helmed by Oscar-winning director Stefan Ruzowitzky. This giallo-infused action/thriller sees a young woman team up with a police officer to stop a serial killer after witnessing her neighbour’s brutal murder. Another fine slice of international horror is served with HOUSEWIFE, winner of MONSTER FEST 2017 ‘Best Director’ and the sophomore effort of Turkish director Can Evrenol, the man behind 2015’s outrageously demented BASKIN. Like Evrenol’s previous effort, HOUSEWIFE is absolutely brimming with fantastic gore and practical special effects, meaning this is definitely not for the faint hearted!

Rounding off this stellar first wave announcement, MONSTER FEST TRAVELLING SIDESHOW is proud to present a 21st Anniversary Screening of Fred Dekker’s cult classic,THE MONSTER SQUAD. Dekker’s loving celebration of Universal Monsters and everything eighties pits a bunch of kids known as THE MONSTER SQUAD head-to-head with a legion of ghouls who are in search of a powerful amulet with which to rule their world.