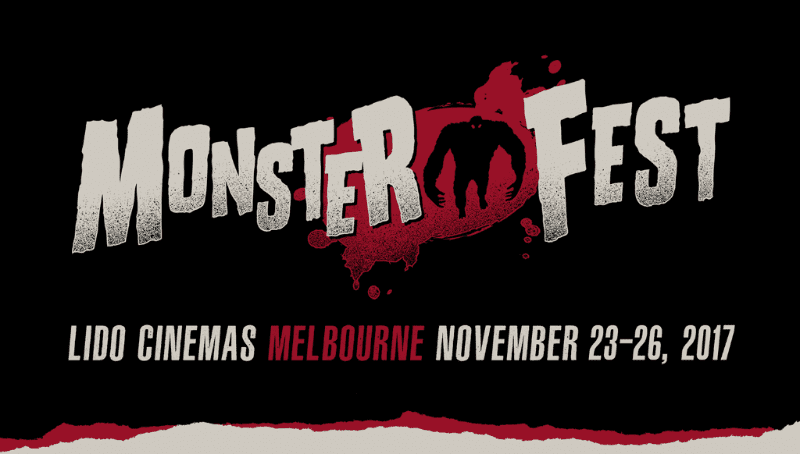 Monster Fest, Australia’s premier genre film festival, today announces its first wave of programming for its annual Melbourne event, to be held from November 23rd to the 26th at the spectacular Lido Cinemas.

The 2017 chapter of Monster Fest, its seventh overall, takes on a very Australian flavour – and at the core of today’s announcement is the inclusion of six brand new Australian feature films, most of which will be enjoying their World Premieres at the festival.

Sun, whose film CHARLIE’S FARM opened the festival in 2014, returns to Monster Fest with an epic that will have horror pundits celebrating Australia’s glorious return to the world of pure, unadulterated, creature feature madness!

Carved from the darkest recesses of Sun’s twisted imagination, BOAR is an outback-set horror masterpiece about a giant, brutal, blood crazed pig – a beast that is sure to go down as one of the most terrifying creations in Australian cinema history!

“We’re delighted to be returning to Melbourne with this film. BOAR is everything I love about horror cinema in one big, nasty, brutal package – it’s got everything you could possibly want in an Aussie horror film… thrills, spills, chills, shocks, and a massive, dirty, vicious one-tonne blood crazed hog! Watch out Monster Fest – BOAR is coming to get ya!”, said director Chris Sun of BOAR’s Monster Fest premiere.

BOAR will be released theatrically by Rialto Distribution, and Universal Sony Pictures Home Entertainment Australia will be handling the home entertainment release.

To mark the announcement, the distributors are proud to offer horror fans all over the world a first-look at the teaser trailer, as well as specially created Monster Fest-exclusive art.

BOAR opens the festival and paves the way for an onslaught of brilliant new Aussie genre cinema, the likes of which have rarely been seen in the one location before.

First up, there’s the Melbourne made, zombie epic THE LAST HOPE from local director Leigh Ormsby. Following on is the return of Melbourne genre stalwart Daniel Armstrong, whose MURDERDROME opened the festival to raptures in 2013, and whose new feature TARNATION promises to be bigger, better, bloodier and more brutal than ever before! Another incredible Melbourne based director, Donna McRea makes her Monster Fest debut with the World Premiere of her sublime LOST GULLY ROAD, followed by Monster Fest regular Addison Heath with his amazing Japanese shot and set, THE VIPER’S HEX. Next up is the debut feature from the magnificently warped mind of Michael Cusack, the creator of YouTube sensation DAMO & DARREN, whose live action comedy ALL NIGHT GAMING rounds out the Aussie features in the first wave announcement.

Other highlights of the first wave include the return of Adelaide’s legendary punk cinema icon Dick Dale, with his much-loved trash feast, TRASHARAMA. Part One kicks off with an inglorious selection of all-new trash gems from every corner of the globe. In Part Two, Dale has curated a ‘best-of’ program that will feature highlights of his twenty years showing the trashiest short films on the planet, aptly titled ‘Trasharama: 20 Years of Hell’.

Also announced today is the big screen launch of Monster Fest veteran Stu Simpson’s hilarious action/comedy web-series DRAGON FORCE X, based on his Monster Fest 2016 ‘Audience Award’ winning Best Short Film, DRAGON FORCE. It is with enormous pleasure we present the first four episodes on the Monster Fest screen. Recently completed via a crowd funding campaign, this is the chance for Monster Fest audiences to rally behind a true homegrown gem, and to quiz the makers on how it found its way from short film to web-series. Included in the launch will be the Australian premiere of the Canadian crowd funded sensation, ANOTHER WOLFCOP (starring pop culture icon Kevin Smith). Producer J Joly will be on hand to fill audiences in on all things crowd funding, and to explain the history behind this unique and phenomenally popular Canadian horror/comedy franchise.

Closing out the first wave is the announcement of our Closing Night Film, REVENGE, by French newcomer Coralie Fargeat. REVENGE is a tale of vengeance with a decidedly feminist twist that left audiences at the recent Toronto International Film Festival aghast by its sheer intensity and brutality. Described by Variety as a “stylistic tour de-force”, REVENGE follows on in the tradition of last year’s Monster Fest sensation, RAW, as one of a new breed of female directed genre films taking the world by storm. REVENGE will close the festival on an unforgettably powerful note.

A locally produced short film will accompany each session.

The full list of the first wave announcement by day and date are:

THE VIPER’S HEX: Director – Addison Heath, screens with THROUGH THE EYES OF THE DEAD: Director – Hussein Alhazard

Monster Fest 2017 takes place from Thursday November 23rd until Sunday the 26th at the Lido Cinemas in the Melbourne suburb of Hawthorn. Tickets for the first wave go on sale immediately. Further announcements of guests and the full program will be made in the coming weeks.