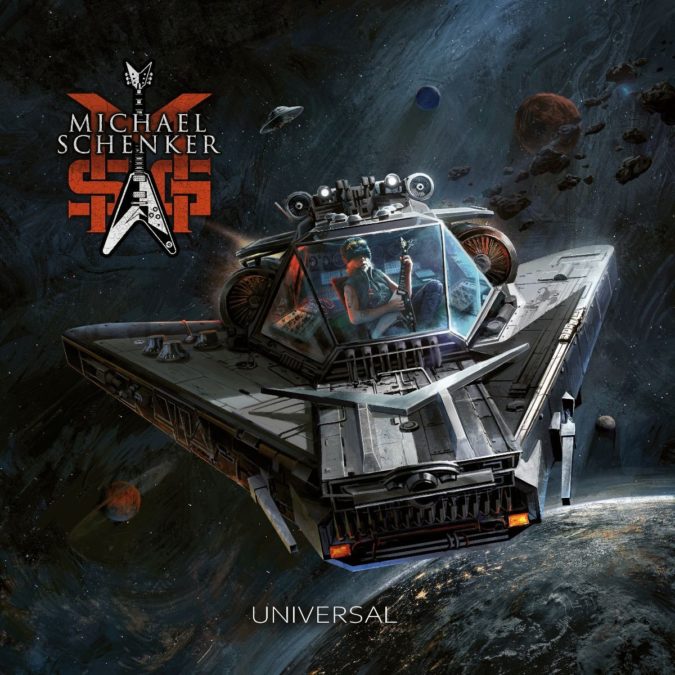 Michael Schenker is back, and he most definitely has not slowed down. The shredder extraordinaire,
who began his career in the 1970s with Scorpions, and dominated British 70s rock with his group
UFO, has been able to sustain a solo career for over 30 years, and for someone who’s been in the
industry for more than 50 years he hasn’t faded into obscurity. The latest album is called Universal
and it contains what you would expect from Michael Schenker, an album full of shredding, riffing,
and unapologetic face melting rock.

There is no denying the Michael Schenker Group‘s shredding credibility. What is surprising is that the
album is filled with well-crafted songs, big riffs and the obligatory extended guitar solos. The vocal
duties on the album Ronnie Romero from the band Rainbow, along with a who’s who line up of
guest musicians. There are guest appearances on vocals from Michael Kiske of Helloween, and Ralf
Scheepers of Primal Fear. Simon Phillips from Toto has guested on drums, along with Brian Tichy
from Whitesnake and Foreigner, Bobby Rondinelli from Rainbow, and bass duties by Bob Daisley
from Black Sabbath. This should give you an idea about the caliber of musicianship on this record, it’s
pretty damn impressive.

Universal is self-produced by Michael Schenker himself, and it sounds like a lot of care and time was
taken in the production of this record. The opening track Emergency is a mid tempo, groove based
track with some very tasty riffage from the get-go.

The second track, my favourite on the record, is called ‘Under Attack’ and it demonstrates perfectly that although Michael can shred till the fretboard is on fire, he can also hold back when needed and play only what is needed.

Other standout tracks on the album are A king Has Gone and The Universe. Both tracks are anthemic and hooky from the outset. Track London Calling is not what you would think it be, sorry Clash fans, but
it is a nod to the English music scene, and it is also a stand out on the album.

Universal does not disappoint, from the 70s UFO style aesthetic of the album cover, through to the
guest appearances all over the album from a who’s who of 70s and 80s rock, the Michael Schenker
Group are as valid now as they were 40 years ago. This record is packed full of groove, hooks and
face melting shred and it is most definitely worth checking out if you’re a MSG fan, or a fan of 70s
and 80s rock.