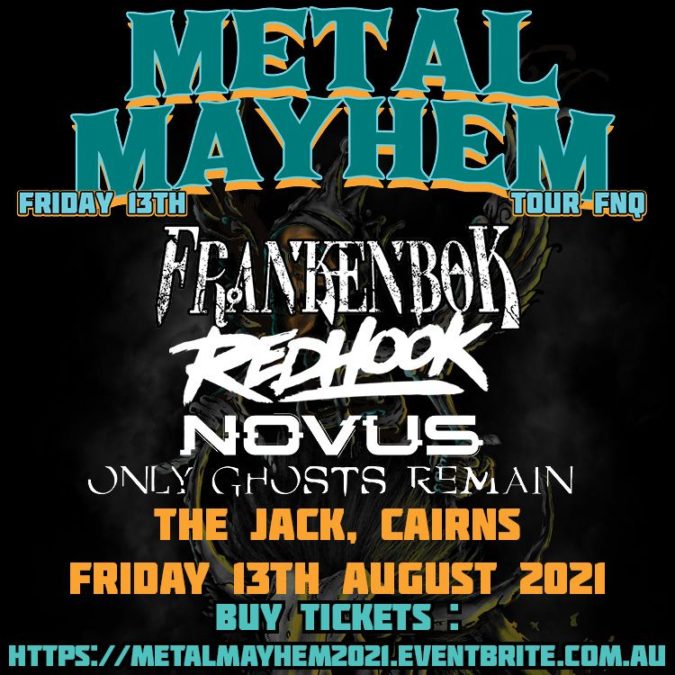 Far North Queensland will come alive to the sound of live music when the inaugural Metal Mayhem hits The Jack Hotel in Cairns on August 13.

Featuring a combination of local and interstate bands, Metal Mayhem will host local outfit Only Ghosts Remain, Novus (Gold Coast), RedHook (Sydney) and Frankenbok (Melbourne) in one jam-packed night of entertainment covering rock through to metal.

Only Ghosts Remain is a North Queensland-based alternative metal outfit whose sonic palette lies at the intersection of beauty and chaos. Through the juxtaposition of clean-cut vocals and brutal metal screams, listeners are guided through dynamic passages that meander between neck-snapping breakdowns and intimate, ethereal interludes.

Hailing from the Gold Coast, Queensland, Novus is an energetic 5 piece melodic-hardcore band taking over stages wherever they can. With the release of their debut EP Solace in 2019, Novus spent the year building a fanbase in the local Brisbane scene, while traveling around south-east Queensland, and interstate to Sydney for the first time. 2020 saw Novus continue their momentum with the release of 3 interwound singles “hopeless”, “Reflect” and debuting on the radio for the first time “Mythomania (feat Jack Bergin)“.

Featuring the core songwriting duo of Emmy Mack and Craig Wilkinson, two strangers from opposite ends of regional NSW whose paths collided after moving to Sydney in 2017 and bonding over the role that music has played in both of their lives, RedHook combine with the young gun drummer Alex Powys to create experimental, heartfelt and attitude-filled alternative music that fuses multiple genres including rock, rap, metalcore and electronica, with lyrics that aim to inspire listeners to keep fighting against the forces of darkness-both in the real world and inside their own heads.

After decimating crowds around the country for over two decades Frankenbok could easily rest on their laurels and survive by name alone.

They could, but they won’t.

After the recent return of arguably their best vocalist in Dan McDougall, Frankenbok have been writing new material and honing their craft almost in secrecy for the last 18 months.

The result is a caged beast fighting to get out and intent on waging war on the eardrums of metalheads far and wide.

Never a band to strictly adhere to one genre, Frankenbok’s new material has been described as a “gamechanger” by HEAVY mag and was recently debuted for the first time to a welcoming and appreciative sold-out crowd at Melbourne’s Kilfest.

Doors open at 6 pm, with tickets $35 and available via https://metalmayhem2021.eventbrite.com.au