Meet The Bands Performing At UNDER THE SOUTHERN STARS 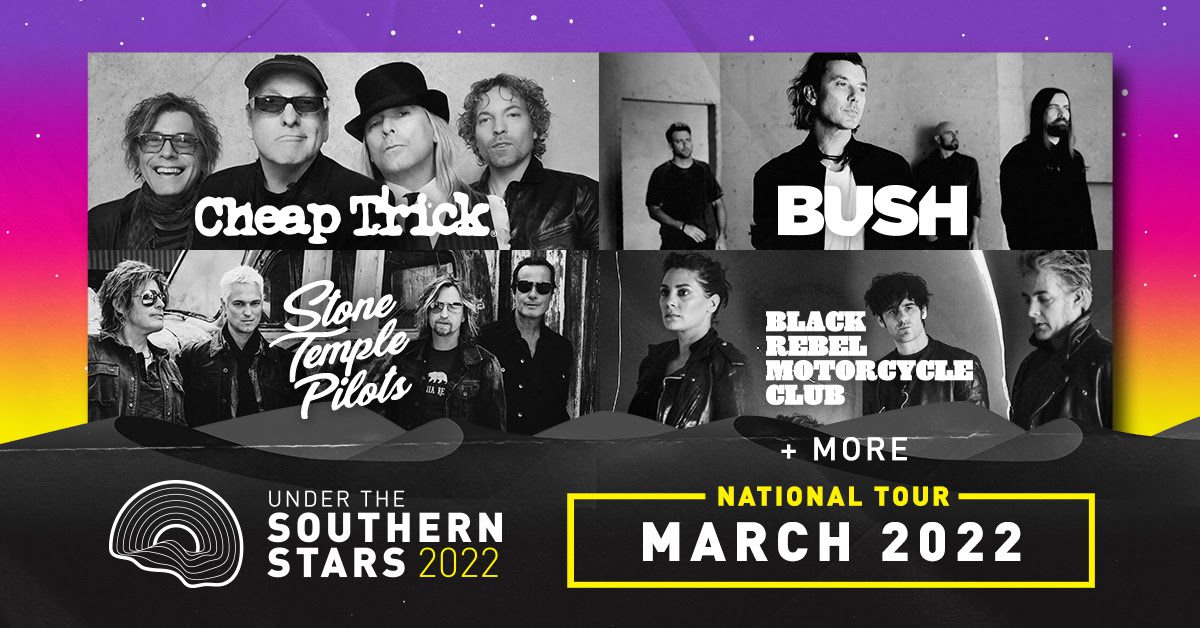 With over 5,000 performances spanning four decades, 20 million records sold worldwide, and inducted into the Rock and Roll Hall of Fame, Cheap Trick are undoubtedly one of the most influential classic rock groups of the past 50 years.

The band was formed in 1974 and while it has evolved throughout the years, Cheap Trick has continued to reach mainstream and critical success. Hits such as I Want You To Want Me, Dream Police, and Surrender have cemented the group as one of America’s top rock ‘n’ roll bands of all time.

In early 2021, Cheap Trick released their 20th studio album, In Another World to rave reviews!

BUSH have been a mainstay on Australian radios since the release of their debut album Sixteen Stone in 1994. The album was an instant smash, spending 43 weeks in the Australian Top 50, peaking at #5. Glycerine, Everything Zen and Comedown are in the DNA of Aussie rock fans and are played daily on the airwaves to this day.

While the ’90s belonged to BUSH, they were on hiatus between 2001 and 2011 when they returned with The Sea Of Memories featuring The Sound Of Winter. In 2019, BUSH came roaring back with the track Bullet Holes, which is featured as the end title on the soundtrack to the Hollywood blockbuster John Wick 3 Parabellum.

One of the biggest rock acts of the 1990s with over 50 million albums sold, Stone Temple Pilots broke out of the scene they helped to define into bonafide superstars. From their breakout debut album, Core, with legendary hits, Sex Type Thing, Creep, and Plush to Purple’s soaring Interstate Love Song and Big Empty and the late 90s smash singles Big Bang Baby and Sour Girl, STP songs are the soundtrack of a generation.

The ultimate road dogs, BRMC harness pure garage punk energy and mix in rolling riffs and dirge-laden rhythms to shake you to the core and make you want a cigarette afterwards.

Their self titled debut album turned 20 this year and for the past two decades through 9 studio albums, BRMC have been at forefront of the psych-indie rock resurgence.

Tracks like the anthemic Whatever Happened To My Rock N Roll, the latter-day Beatlesque-like Spread Your Love and the hypnotic Beat The Devil’s Tattoo define a band that was made for the stage.

Rose Tattoo, the true rock and roll outlaws and first and last gang in town, rumbled into existence in late 1976 with a New Year’s Eve debut at Sydney’s legendary Bondi Lifesaver.

With Wells on slide guitar and Rilen on bass, former Buster Brown singer, Angry Anderson was recruited along with rhythm guitarist Mick Cocks and drummer Dallas “Digger” Royal, and they set about destroying eardrums and venues across Australia.

Now, some 46 years later, Rose Tattoo are still at the forefront of Australian hard rock and are only getting better with time1

With countless hits such as Nice Boys (Don’t Play Rock ‘N Roll), Bad Boy For Love and Rock ‘n Roll Outlaw Rose Tattoo are more than a band. They are an institution of Australian rock.

Led by the enigmatic and powerful vocalist Rusty, Electric Mary have supported anyone and everyone in the rock scene and have more than matched them on every occasion.

Playing old school pub drenched rock with an irresistible swagger, Electric Mary make the perfect addition to what is the premiere rock festival to ever hit this country.

UNDER THE SOUTHERN STARS ALIGN WITH ADELAIDE FRINGE FESTIVAL

Under the Southern Stars have aligned with Adelaide Fringe Festival, the city’s biggest annual celebration, and will bring this mammoth party to town in line with its new post covid national tour dates.

Adelaide will have three massive shows to wrap the month-long Fringe Festival with fourteen acts playing on the #UTSS2022 stage across the weekend of 18-20 March.

Those who have existing #UTSS tickets for prior Adelaide event dates will be pleased to know that their tickets are 100% valid for any one day of the three #UTSS Fringe Festival events or upgrade their one day ticket for a two or three day pass!  Eventbrite ticket holders can re-download their existing Adelaide tickets using the Eventbrite app with the 2022 show date and line-up and store their tickets for use on show day!  Should Eventbrite tickets need to be reissued, UTSS organisers will be in touch directly via email leading up to the Adelaide events.


Each day of #UTSS2022 at Fringe, audiences will see a curated number of #UTSS2022 artists perform live, along with a brilliant supporting line-up.