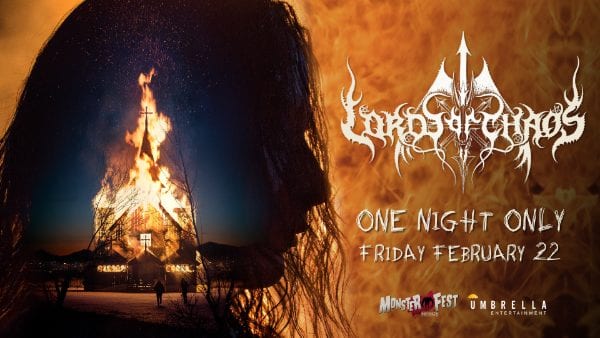 MONSTER FEST in association with UMBRELLA FILMS are proud to present “ONE NIGHT ONLY screenings” of the black metal biopic LORDS OF CHAOS on Friday, February 22 across Australia and New Zealand.

After two sold-out screenings at Monster Fest Melbourne, sponsored by HEAVY Magazine, in November last year, the long-awaited movie adaptation of the infamous 2003 book is gearing up for it’s highly anticipated Australian release.

Hardcore metal fans will no doubt already be familiar with the book, Written by Michael Moynihan and Didrik Søderlin, that chronicled a series of shocking crimes that shook Oslo, Norway in the early 1990’s committed by the founders of the black metal bands MAYHEM and BURZUM and subsequently blew the lid off the underground Scandinavian Black Metal scene.

Combining a realistic look at the oft-neglected world of metal, a beautiful Norwegian setting, the blackest of black humour and brutally visceral scenes of violence, LORDS OF CHAOS may be the rare film that is true, uniquely “black metal”.

Director JONAS ÅKERLUND former drummer for pioneering 80’s black metal band BATHORY is uniquely placed to portray the realities of being in a black metal band. Despite the grim subject matter, Åkerlund manages to infuse the film with much heart and humour.

LORDS OF CHAOS will screen in cinemas across Australia & New Zealand for ONE NIGHT ONLY on Friday February 22.