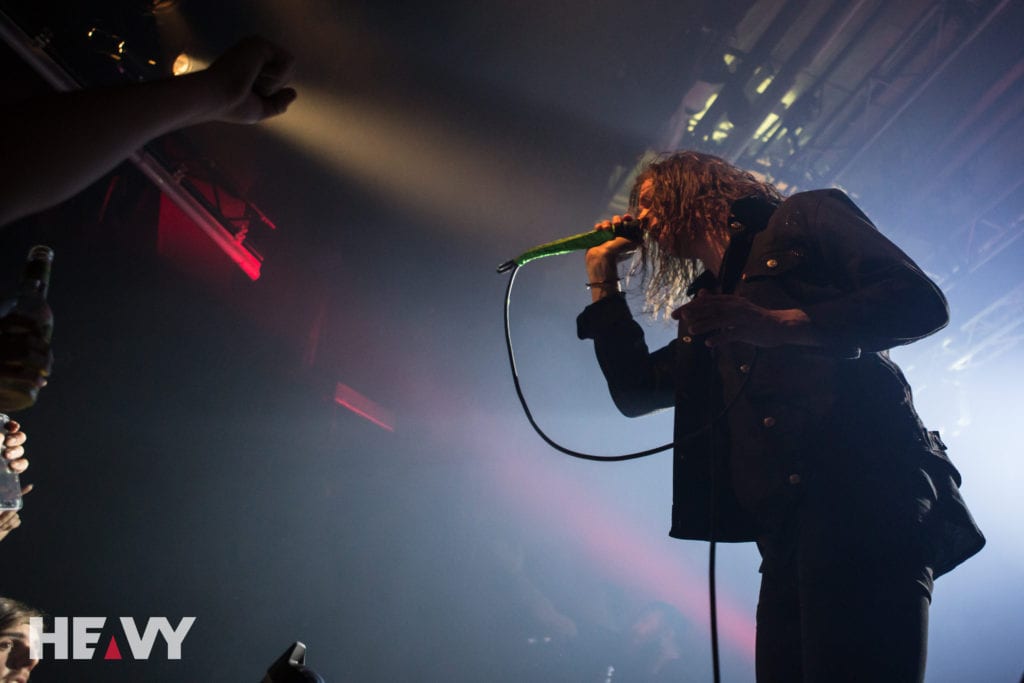 There is something undeniably special about attending the self-christened “rebirth” tour of one of the most important, most successful post-hardcore bands of the 2000s. Underoath, for the first time since their reunion in 2015, graced Melbourne’s hardcore scene with the almighty presence of a band as crucial to the genre as the walls to the venue. They, along with Sydney post-rockers sleepmakeswaves transformed neon-lit 170 Russell into a room bursting at the seams with emotion, energy and some of the best vibes imaginable.

This concert was a first for me, actually, given that I’ve never seen an instrumental band live. What a fine group to introduce me to this wonderful world. Sleepmakeswaves took to the stage with a heavy synth introduction, creating an atmosphere, unlike anything I’ve ever witnessed before. I’m used to hardcore shows where people are bouncing up and down, throwing themselves at each other, screaming and cheering and having an absolute time; there was none of this, however. Possibly completely enchanted by the poignant melodies cutting through the air, perhaps in a trance induced by the crystal quality of the music, possibly as politely intrigued as I was, the room was still. The only movement came from the four members of sleepmakeswaves as they danced and thrashed across the stage, looking like an entirely orchestrated jam session between a group of passionate people. It was like listening to the recurring collision of aggression and beauty as heavy rhythms empowered soaring melodies, leaving no room for vocals to distract from the complexity of the sounds. Forgive me if this sounds verbose and pretentious, but it’s my best attempt and illustrating the overwhelming power of hearing beautiful music played really loudly in a dark room. Listen to sleepmakeswaves, you’ll understand.

No amount of beautiful music could detract from the headline act of this tour. The half-hour interlude between bands seemed to drag on forever before Underoath finally appeared, unleashing a massive eruption of energy from the crowd as they launched into Young and Aspiring, their first song of a whopping 22 song set. The crowd, evidently prepared for the back-to-back performance of 2004 release They’re Only Chasing Safety and 2006 release Define The Great Line, needed zero encouragement as frontman Spencer Chamberlain opened up, effortlessly transitioning between fierce screams and crisp clean, vocals. A Boy Brushed Red Living in Black and White, It’s A Dangerous Business Walking Out Your Front Door and Reinventing Your Exit were the obvious favourites of the album as Chamberlain’s voice was drowned out amongst hundreds of singing fans and the force of the instrumentation. Such a reception and well-executed performance of a 12 year old album is a testimony to the timelessness of Underoath’s early music, both for their audience and for the band.

A brief pause signalled the end of They’re Only Chasing Safety and cued renewed anticipation for Define The Great Line. Where TOCS seemed far more partial to the emotion of the evening, DTGL shifted focus to the reverberating energy in the atmosphere. In Regards To Myself proved to be the quintessential post-hardcore track in performance as fast riffs met weighty rhythms and ferocious screams, while album favourites You’re Ever So Inviting and Writing On The Walls fulfilled the longstanding dreams of many an Underoath fan. Some reviews can, and should, be about thoroughly recounting the evening that was had, however this was not the case for Underoath. Instead, narrating the atmosphere of the night and trying to convey the magnitude of the appreciation for the band seems far more pertinent, emphasised by Chamberlain’s acknowledgement of the fans’ role in the band’s reunion. Instrumental interlude tracks Salmarnir and Casting Such A Thin Shadow were right at home amongst heavier songs, showcasing the fine musicianship of Underoath’s rhythm and melodic section. As the last note of To Whom It May Concern rang out, it would be fair to say that the band could not have offered up a more perfect performance to announce to Australia, once and for all, “welcome to the rebirth of Underoath.”