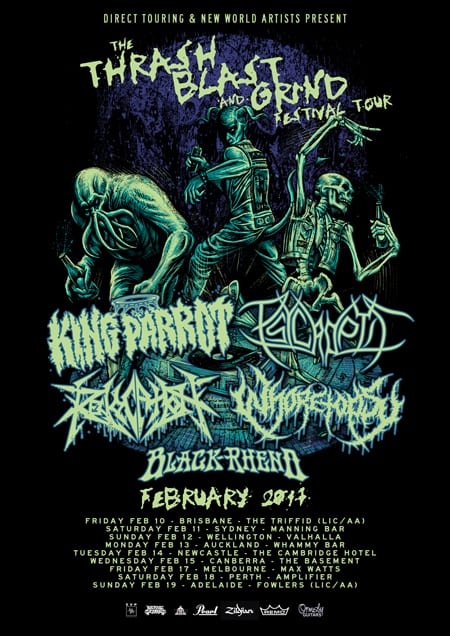 It’s hard to think of a more appropriately named event than the Thrash, Blast and Grind Festival. While none of the bands on tonight’s bill ever quite pulled off all three elements in one, there was plenty of all three to be had across the night, with none of the six extreme acts coming up anything short of outstanding.

Melbourne up-and-comers, Hollow World continue to look and sound exactly like The Black Dahlia Murder, with their ultra-fast and beatdown-heavy take on the melodic death metal template. They also continue to be one of the most promising and proficient acts on the Australian extreme metal circuit. The band are as tight as any out there and ooze an amount of professionalism well beyond their humble years. Their debut LP, ‘Exanimate’, is due out next month, and anyone with even a passing interest in extreme metal would do themselves a great disservice by letting that one slip by.

In a continuing trend of bands who are best explained in reference to a more established act, Sydney’s Black Rheno took to the stage like a stripped back version of tonight’s headliners, King Parrot. Yet the band also brought their own spin on things to the table. The twin bass/guitar output of Mariano Palomares gave the band a thick, sludgy undertone, reminiscent of the likes of Down or even Kyuss. Meanwhile, the three-piece’s imposing frontman, Ryan Miller spent much of the sets instrumental sections boogieing down with some impressive staccato dance moves, as though he were the Peter Garrett of grind.

The Sydneysiders’ set started off somewhat mildly, as the early crowd came to grips with their confronting mix of sludge, grind and hardcore. However, it wasn’t long before they were won over—primarily due to Miller jumping down offstage and physically forcing people into the pit—and it’s hard to think of the high-octane performance as anything short of convincing.

As good as tonight’s two openers were however, there was a noticeable pique in interest as Melbourne slam-gurus Whoretopsy. It’s easy to see why the quintet have risen to the upper echelons of the local extreme music scene, as—like Hollow World before them—it’s hard to imagine a more professional performance coming from this particular subsection of the metal spectrum.

However, for me at least, their lyrical content remains a sticking point. Though hardly decipherable in the live environment, the band’s pervasive victimisation of women remains a sticking point. While their lyrics are predominantly tongue-in-cheek, to say the least—see: ‘White Men Can’t Blump’ and ‘Hiss Your Eggs Out’—their trademark song, nevertheless, is about torturing and killing a woman for cheating on her partner. Again, I don’t think it is the band’s intention to actively promote this sort of behaviour, but it all adds up to an uncomfortable ideology, which is especially disturbing in light of recent revelations concerning the Australian heavy music scene. Still, no one but me really seemed to mind, and on a night full of highlights, Whoretopsy remained one of the most well received.

Next up were the night’s lone international outfit: the mighty Revocation, from the (seemingly-not-so-)United States. Having released six critically-acclaimed albums in the space of the last ten years—not to mention one of the best EPs ever committed to record in 2012’s ‘Teratogenesis’—the Americans are a band who’ve seeming never been given their proper due. Playing third-stick amidst a bunch of local acts might seem to only further that assessment. However, the band took to the stage with an infectious enthusiasm, while bringing a hefty dose of thrash to the so far primarily blast-and-grind-based outing.

Perhaps one of the sticking points with Revocation are the vocals of the band’s eclectic frontman, David Davidson, which even amidst tonight’s brutal offerings, often failed to provide a melodic or elsewise-centring anchor to latch onto. This is not to say that they were in any way ‘sub-par’. However, it was clear that it was the more-melodic, instrumental sections, such as the conclusion of ‘Bound By Desire’ and the concluding ‘Witch Hunt’, where Davidson truly got to stretch his imposing guitar-hero muscles, which left the biggest impression.

Local mainstays, Psycroptic probably aren’t used to playing on bills where they might possibly be outplayed, and Revocation posed quite the challenge to their technical mantle. Fortunately, this was the same, well-oiled machine witnessed at last year’s  ‘…Almost Halloween …Almost a Metal Fest’. Although the band didn’t quite live up to that career-peak performance, they fell only slightly short, with imposing frontman Jason Peppiatt again providing the quartet with their crucial centrepiece and commanding the crowd with absolute mastery.

There isn’t much more to say about Psycroptic, other than that they were completely flawless. Dave Haley continues to be an inhuman drummer, and they’re at the point with their new material where there isn’t a weakness to be found in their performance, besides perhaps a slight over-familiarity with the current set list. However, the band addressed even that—throwing back to ‘Sceptre of the Ancients’ (2003) for an unexpected rendition of ‘Lacertine Forest’, supposedly at the behest of fill-in bassist Todd Stern (Abacinate, Hammer Fight).

It was possible, in advance, to see tonight’s headline billing of King Parrot as somewhat of an Australian extreme metal coup d’état. Psycroptic have enjoyed almost unrivaled precedence as the premier act on the Australian heavy music circuit, for pretty much their entire existence. Given the reverence of that band as one of the most technically-challenging and progressively-minded in the game and King Parrot’s rise to notoriety as somewhat of a ‘gimmick’ band, it was always going to be interesting to see if the irreverent grinders were going to be able to hold their own.

Long story short: they definitely did. While the Melbournians still found time to slip in plenty of VB-openings, moonings and muesli bar offerings in-between songs, what was most impressive about King Parrot’s set was perhaps the degree to which the band let the music (rather than charismatic bassist Wayne Slattery, a.k.a. ‘Slatts Slattz’) do the talking for them. The quintet’s set was essentially forty-minutes of near-uninterrupted grindcore, with the band’s M.O. seemingly being to lay down three-to-four song slabs of unadulterated brutality; rinse and repeat—literally, in the case of screeching frontman Matt ‘Youngy’ Young, who kept both himself and the crowd hydrated with a continuous barrage of aggressively-dispersed, bottled water.

As mentioned at the top, ever single band on the bill were nothing short of superb, and only provided further testament to the fact that Australia is home to some of the best extreme metal acts in the game. Here’s hoping the Thrash Blast and Grind Festival returns again, somehow in an even more sublime and brutal incarnation.