Local symphonic dark jazz ensemble Valtozash were the first band of the night and didn’t they start things off with a bang!

In what can be described as both a sound engineer’s dream AND nightmare, the sixteen-piece ensemble (that’s right I said 16 piece!) absolutely blew the crowd off their feet, providing all sorts of pandemonium. They set the tone with a 1970s jazz fusion horns section complied of soprano saxophone, trombones and trumpets which merely provided a starting feast for the ears which was compounded by tenacious sludgy bass backings and catatonic gothic guitar solos.

Valtozash has such a robust variety of sounds that keeps you fixated on the stage feeling like you know what’s coming with a chaotic transition from anarchy to clarity with intense rhythmic breaks, tempo switches, multiple time signatures and key changes plus drum grooves that will have you headbanging one minute then hypnotized the next.

After the scorched earth settled from the previous piece, Valtozash had one more trick up their sleeve when they pulled an absolutely astonishing rendition of Dragonforce‘s “Through the Fire and the Flames”, changing intricate guitar solos for exhilarating brass sections layered with perfectly harmonized instrumentation. The guitarists absolutely destroyed the fretboards before finally topping off with an epic orchestral ending that left everyone feeling what I would call sensory destruction at its finest.

Next up was Brisbane’s prog-rock machine Weightless in Orbit.

The 5-piece hit the stage showing their canvas of innovative songwriting and technical prowess.

Expanding the atmosphere of the room with ambient harmonies and huge shoegaze reverbs on their opening track, the band slowly eased into sublime prog-rock grooves with quirky jazz-derived riffs turning a sit-down show intended show into headbangers delight.

Weightless In Orbit also announced a new bass player who really brought the bands backing to life, providing a fresh new raspy feel which paired perfectly like a fine wine with their eerie yet compelling synths and boundless drum grooves. It all went down an absolute audible treat.

While at times struggling to cut through the in-house mix  frontman Brandon’s vocals conveyed a wide array of his talent, from emotionally charged melodies to unpredictable vocal slams while displaying extremely dexterous guitar riffs and immersive rhythmic chord progressions which made you get lost in the musical tornado that is Weightless In Orbit.

I can see the band going places, when providing that level of technical musicianship and crowd engagement, grab them at their next live show to be amazed but let’s hope for big things coming!

Weightless In Orbit is definitely for fans of bands like Polyphia, Chon, Plini, Tool, Northlane and David Maxim Micic.

Next up was Brisbane’s own heavyweight progressive/thrash lords Therein, debuting tracks from their Album Aramitama.

Now, Therein are a must, but why you say?

Well, they do it differently!.

Guitarist Ryan Boyd hit the stage in a full costume of classic Scottish attire, kilt and all, and ever so subtlety a vibrant Highland folk tune started swarming the room, really setting a tone to come.

Once fully charged the juggernauts dive into progressive metal riffage, ducking in and out of obscure times signatures, harmonized solos, articulate and moving bass lines keeping you grounded amongst all the sporadic intensity and destruction. Then, as the dust came to rest, they threw in a swinging shuffle beat and hypnotic jazz flute sections that fill the room with vibrance but also unpredictability as they keep the layered destruction going with frontman Cameron Whelan crushing expert death metal vocal layers over the voracious juggernauts alongside him.

Therein displays an electric collection of psychedelic and musical tangents across all instruments; spacey undertones, boundary-pushing musicianship with their dark diminished chugs, textured yet abrupt progressive Celtic Guitar riffs, engulfing rhythms, and ferocious verses into tenebrous jazz flute sections which morph the atmosphere. Each track is like navigating uncharted waters – it’s all out there with these guys, their willingness to musically push boundaries is not going to stop.

The band displayed more showmanship with an old-school guitar and bass riff session reminiscent to Iron Maiden and Tool.

After displaying such zealous musicianship and assaulting each of your senses Therein also provided great banter and crowd engagement, keeping the room alive and the mosh fresh.

Therein are a must-see when you can, as it is a whole new untapped musical blend and leaves you asking for more and what the hell just happened. But alas, if you have missed them live you can check all their music via the band’s socials so no need to wait! 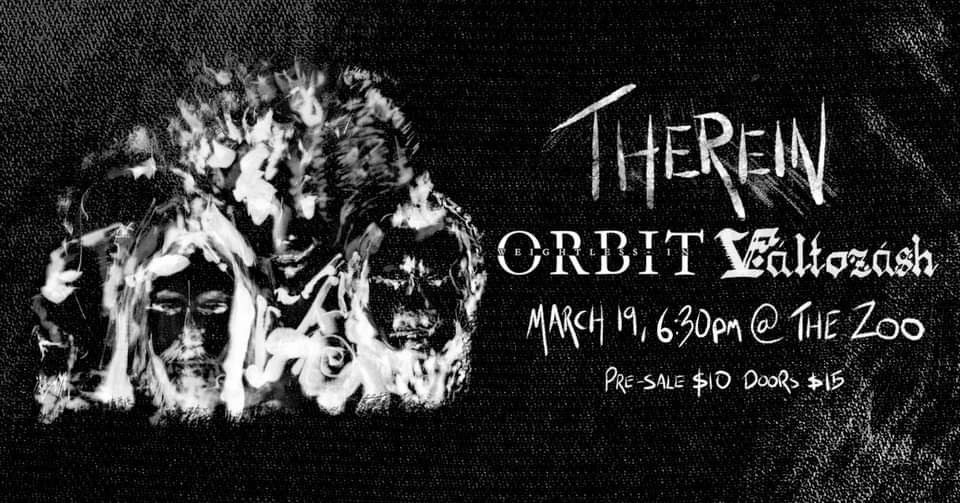