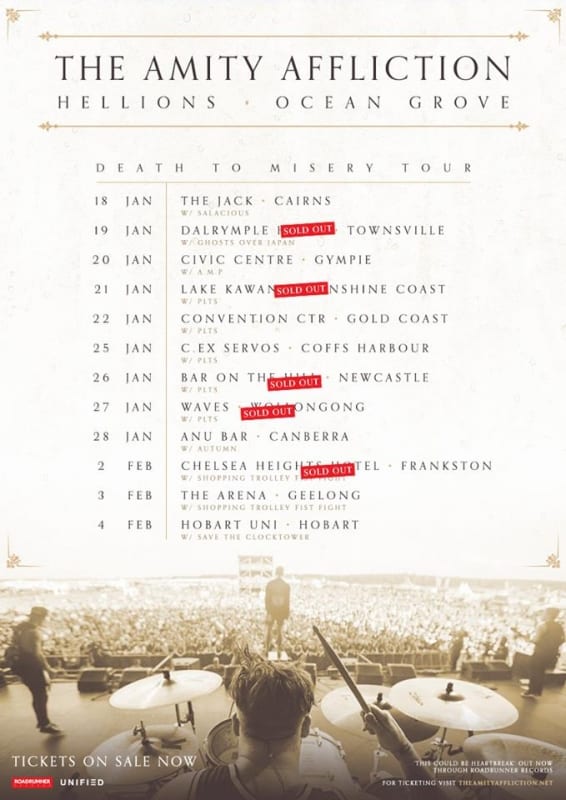 If you were to ask me how many times I’ve seen The Amity Affliction live, it’s unlikely I’d be able to give you a definitive answer and I’d instead hazard a guess at about six or seven. I think, therefore, that that alone speaks volumes about this band’s consistently fantastic live performances and their unfailing ability to draw huge crowds of dedicated fans on the regular. While critics may argue that their music has a tendency to sound repetitive, their live shows are far from it and showcase just how important Amity has been to the Australian hardcore scene.

After spectacularly underestimating the time it would take to drive to Geelong in peak traffic and get inside, we caught only the last two songs of local act Shopping Trolley Fist Fight. It was clear, however, that the sizeable crowd were taking to the opener very nicely, STFF being an exceptional representation of Melbourne’s thriving hardcore scene.

Ocean Grove took to the stage next, a band who are no strangers to supporting massive Australian acts. Vocalist Luke Holmes brought all the charisma and good vibes that you could imagine to the stage, matched by his bandmate counterparts, who were all no doubt still on a high after the highly anticipated release of the band’s debut album The Rhapsody Tapes earlier that day. New songs These Boys Light Fires and Intimate Alien had the crowd off the ground and feeling the energy, while tracks off the band’s 2015 EP Black Label went down a treat with older fans. Ocean Grove’s eclectic combination of rap-style vocals with brazenly heavy instrumentation and the occasional electronic lick transfers extraordinarily well to a live setting and is something well worth experiencing first hand.

Hellions, the third act on the all-Australian bill, delivered an almost-equally strong performance. They aren’t quite my cup of tea, though admittedly I enjoyed seeing them for the second time significantly more than the first, however they are unarguably taking Australian hardcore in an unprecedented, exciting direction. The by-then packed out venue was beyond sufficient indicator of Hellions’ growing popularity as ecstatic fans jumped, sang and crowd-surfed to Opera Oblivia favourites Lotus Eater and Thresher, the latter deserving no better description other than a hardcore party anthem. 24 brought some heart-warming sentimentality to the crowd as we were encouraged to raise our lighters/phone flashlights to the sky, something truly special for all involved. My only irk of the set is in regard to the gang vocals that feature on nearly every track; four vocalists on stage proved to be more jarring than anything else at times, however was only a minute dampener on a well-orchestrated performance.

This may be a superfluous comment, but it was clear by the time The Amity Affliction took to the stage that this was the band everyone had come to see. The setlist was infallible and catered for new and old fans alike, from a trip down memory lane to 2011 release I Hate Hartley right up to new favourites I Bring The Weather With Me and All Fucked Up. Ahren Stringer’s sharp, soaring vocals powered through the set alongside hundreds of screaming voices that, true to the dedication of their fans, didn’t miss a lyric. Vocalist Joel Birch screamed with a ferocious intensity during Amity classic Open Letter that only fuelled the crowd’s energy as waves upon waves of crowd surfers rode their way into the arms of security. Musically, the hardcore legends were as tight as ever; Death’s Hand had the audience positively salivating as Dan Brown played his note-perfect riff, and fill-in drummer Casey McHale filled the shoes of Ryan Burt perfectly. Not even a front of house crash could quell the show’s energy as fans chanted right through to its resumption. Looking back, it’s hard to identify one or two highlights of the set; Amity have reached the highly sought-after yet rarely achieved point of being able to play any song they like and have the crowd go absolutely off in response. A three song encore of monumental tracks Pittsburgh, Don’t Lean On Me and This Could Be Heartbreak gave fans a final chance to let loose, before the quartet disappeared and we were left buzzing in their wake. To summarise, I’d say Birch himself put it quite nicely three songs in when he uttered a succinct “fuck yeah, Geelong.” Fuck yeah, Geelong, indeed.