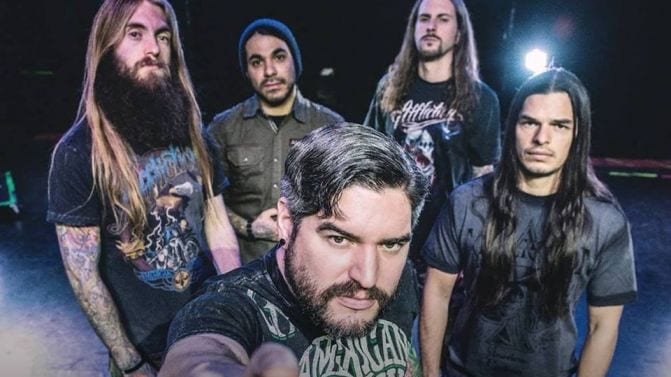 What better way to end Father’s Day than with a blast of deathcore?
First up, Brisbane’s bastions of brutality, Disentomb. Despite the relatively small crowd, Jord and the boys played with a level of intensity that is demanded from death metal fans. They didn’t give a fuck that it was a Sunday night, and did their best to get the punters in the front row moving. Their set consisted of tracks from both of their LP’s Misery and Sunken Chambers Of Nephilim, including Abominations Created Through Divinity, Chthonic Gateways, and Cystic Secretion, while set closer, Vultures Descend got a good reaction from the crowd.
Next up, Melbourne deathcore five-piece, Boris The Blade. These guys have been touring relentlessly on the back of releases Tides Of Damnation and The Human Hive, and it shows. Their live set was fierce. With elements of traditional death metal as well as deathcore, their music is a vicious blend of blastbeat drumming, technical riffage, and huge breakdowns. One thing that could not be understated is the ferocity of their performance. Vocalist Daniel Sharp is intimidating and aggressive, and he grabbed us by the throat and pinned us to the wall.

Highlights were new song Backstabber, and Like Wolves (featuring guest vocalist, C J McMahon).
Wollongong has produced some awesome bands over the years, and with support slots for the likes of Thy Art is Murder, Northlane, In Hearts Wake, and now Suicide Silence, Graves’s profile continues to rise. They have been called the heaviest band in Australia, and, as this was my first time seeing them, I was hoping that they would live up top that reputation. A concoction of deathcore, metalcore, doom, and groove, they are loud and extremely heavy. Still Alone and new song Fear were the highlights as they did their best to level the Manning Bar with their huge, menacing sound.
US deathcore giants Suicide Silence need no introduction, and they took to the stage to a huge cheer from the Manning Bar crowd. Opening with Unanswered from The Cleansing, they blew everyone away with their trademark brutal vocals and HUGE breakdowns. After No Pity For A Coward and Inherit The Crown, frontman Eddie Hermida wasn’t happy with the crowd’s lack of enthusiasm. He challenged the punters up the back and sides of the room to get their arses down into the pit, and called for the guys in the pit to ‘Wake Up’, which just happened to be the next song they played. From there, the intensity of the show, and the audience really lifted. There were hundreds of middle fingers in the air during Fuck Everything, huge moshpits during Sacred Words, Slaves To Substance, and You Can’t Stop Me. The banter between Eddie and the audience was brilliant, and I’ve never before seen a ‘Wall Of Death’ that was instigated by the audience themselves.
Towards the end of the set, an Italian guy named Lorenzo was invited on stage to show off his stage diving prowess, which led into Destruction of A Statue. The band left the stage to the obligatory chants of “one more song”, and returned a few minutes later to a little Smells Like Teen Spirit interlude, after which Eddie and the guys sent us home with the big closer, You Only Live Once, which had the punters screaming ‘Live Life Hard’ at the top of their lungs. Words to live by indeed.