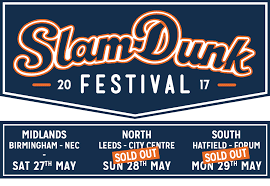 Slam Dunk North got off to a roaring start on the Signature Brew Stage with Puppy (6.5) drawing a relatively decent sized crowd despite their early afternoon start. The Londoners’ unique blend of downtuned alternative rock riffing, Weezer-esque nasally vocals and catchy hooks serves them well and suits the sun-laden car park perfectly.

Next up on this stage was indie-emo Americans’ Sorority Noise. (8) Their morose, passionate lyrics are shouted back by over a smattering of dedicated fans, whilst new converts watch on in amazement. Vocalist Cameron Boucher is very much centre stage, with long hair hidden under a Ford cap, he screams, sings, whispers and contorts his voice and body with a weighty passion. Guitarist Adam Ackerman, looks like he could be playing in Megadeth, thrashing through relatively complex lead guitar lines on a Gibson Explorer.

Following Sorority Noise was a tough act, but Milk Teeth (7.5) were more than up to it. As they emerge, a voice from the crowd shouts out the bands name.  “That’s us,” guitarist Chris Webb replies chirpily. They burst into “Brickwork,” a track that sums up the Milk Teeth MO: transcendent female vocals, taught, screamed verses and memorable guitar lines. New track “Owning Your Okayness,” was the set highlight; despite only being out for a couple of weeks, it saw a huge crowd reactions.

The Jagermeister Stage received a kickstart when metalcore veterans Bury Tomorrow (6.5) took to the city centre stage at 4:35PM. The set included tracks from their latest three records, though songs from their 2012 release, “The Union of Crowns,” with closing tune “Sceptres,” providing a perfect climax to a strong, if standard, Bury Tomorrow set.

A quick trip back to the Signature Brew Stage saw Citizen (7) giving the fourth incredibly emotional performance to grace the alternative stage that day. Kicking off with fan favourite “The Summer,” from their acclaimed 2013 record, “Youth”, the entire car park seems to sing along. It’s a set dominated by tracks from that album, with just two coming from their latest, “Everybody Is Going To Heaven.”

Back on the main stage, Deaf Havana (7) put in a strong performance, despite lead singer James Veck Gilodi suffering with throat problems. In sharp contrast with Citizen, their set drew heavily from their latest record, and each of these tracks went down well with the large assembled crowd. The band all put on a fantastic show; guitarist Mathew Veck Gilodi twice takes to the  floor to deliver his solos in an entertaining, rock’n’roll stage move that gels well with the bands classic rock infused sound.

Don Broco (8) have to contend with a slightly late start due to technical issues, but once they get off the starting block, they prove why they’re set to headline Alexandra Palace later this year. The bands boisterous, groove-laden tunes are perfect for the sunny afternoon setting and easily get the whole crowd bouncing along. Special guest appearance from Dani Winter-Bates of Bury Tomorrow during “Thug Workout,” sees the songs intensity stepped up a notch before the band dust off their thirteen song setlist with a one two punch of “Money Power Fame,” and latest single “Pretty,” during which fans hold aloft masks of lead singer Rob Damiani handed out throughout the festival, in a surreal but entertaining bit of crowd interaction.

Enter Shikari (9) close out the heaving main stage. They fulfil their promise of a “Take To The Skies” celebration; they get through their entire debut record in three blocks. First up is a volley of “Stand Your Ground…,” “Enter Shikari,” “Mothership,” and “Anything Can Happen,” after which they pause to take in some newer material. The old tracks generate a serious amount of nostalgia from Slam Dunk’s mostly twenty-something audience and the spattering of newer tracks prove that since that first record, Shikari have only honed their already-excellent songwriting skills.

There are sombre moments in the set; before “Anaesthetist,” Rou Reynolds gives a speech encouraging one thing: voting out the Conservative government and flushing out healthcare privatisation. The Slam Dunk mainstage is in Leeds Millennium Square, next to a 250-year-old NHS hospital. Rou says it is one of the “most beautiful,” places the band have ever played.

Shortly before closing, Shikari take a break to commemorate the victims of Tuesday’s Manchester terror attack. Before performing a cover of Oasis’ “Half The World Away,” he dedicates it with “solidarity, love and compassion to the people of Manchester.” They follow up the cover with “Adieu,” a fitting conclusion to the set.

Unfortunately, the choice in encore tracks (“Redshift” and “Ok, Time For Plan B,”) are slightly underwhelming after the genuinely beautiful conclusion to the main set, but that doesn’t do too much to damper Shikari’s fantastic performance.

PrevPrevious.[ALBUM REVIEW] Obey The Brave ‘Mad Season’
Next.[PHOTOS] FLESHGOD APOCALYPSE and Hybrid Nightmares at Max Watts, Melbourne on the 03/06/2017Next