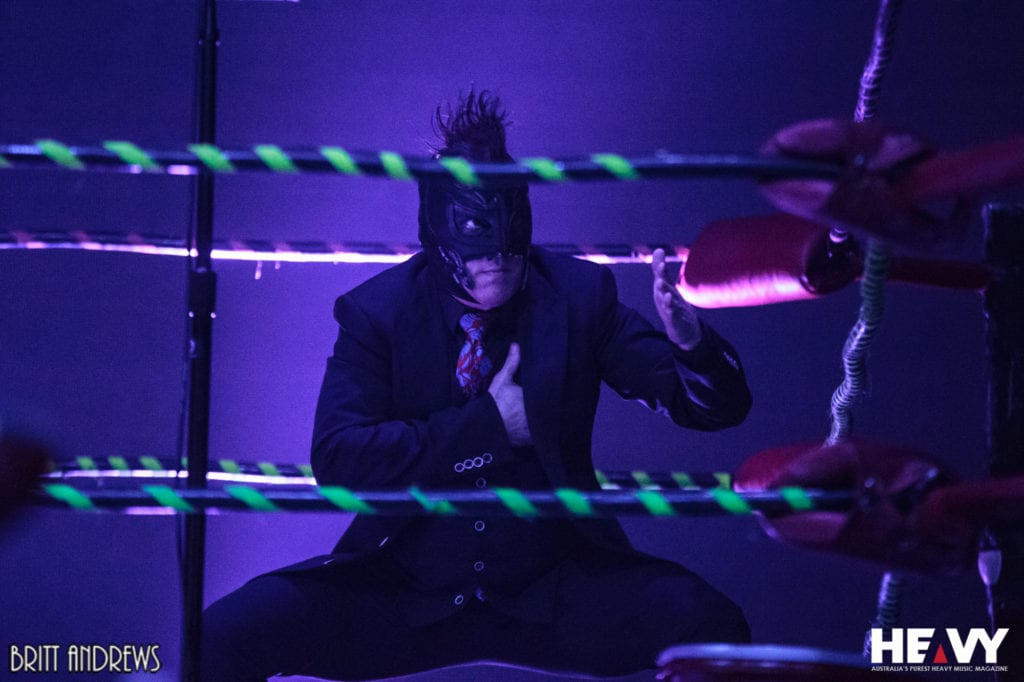 What does Lucha Libre wrestling, cockfighting, superhero puppies and live music have in common? You’ll see them all on Puscifer’s Money Shot tour. Witnessing a Puscifer gig is a bit like being in a secret society. The show itself is shrouded in mystery, with no cameras, audio or video recording allowed at any show. This is drilled into you by a video shown before Puscifer started, with Major Douche reiterating “Don’t be a dummy. No dummies. Dummies gotta go.”

At the very least, watching a Puscifer show is a full-on sensory assault. For some in the crowd – it is a near religious experience.

Like a well-oiled machine, there was a five-minute changeover (8:27 – 8:32, according to the set times) before Puscifer were ready to begin. Before Major Douche’s announcement about mobile phone contraband, the screens informed us that Carina Round’s cobra had gone missing. “If you see it, grab it. Otherwise tighten your pant legs, if you have a rubber band or something.”

Unusually, drummer Jeff Friedl had the front centre stage position, and behind him – inside the wrestling ring – stood singers Maynard James Keenan and Carina Round. Wile Round had a white spotlight on her, Keenan was shrouded in darkness and remained that way for almost the entire show. With a slow, intense build up, they opened on Simultaneous, followed by Galileo and Agostina. Keenan and Round were then replaced in the ring by the wrestlers from Luchafer for another round, before the words “ACT 2” came up on the screen behind them. This set the scene for the night. The set was split into acts, and interspersed with wrestling – and the aforementioned cockfighting. At the end of Act 3, a miniature ring was placed on the stage, and two electric chickens were put in it. One for Keenan, and one for Round – hers sporting a sparkly black top hat. The band launched into Toma, and the chickens fought it out for the entirety of Act 4 – bar the few times when they died, and someone had to run on stage and turn them back on.

With six musicians, five wrestlers and two robotic chickens on stage, it was hard to know where to watch. Add on the screen in the background – showing everything from superhero corgis, to images of the Grand Canyon at sunrise, to Maynard James Keenan pulverising wrestlers with laser eyes, to a black and white home video of a boy wrestling a chimpanzee. Which is quite scary, considering chimpanzees are four times as strong as humans and could have easily killed that boy.

Suddenly, in the gap between songs, Keenan approaches the ring, and from under the apron pulls out a steel chair a megaphone, and tears into Conditions of My Parole, running around the inside of the ring like a madman, while Round echoes him outside the ring. Directly following that we were treated to Money Shot and Man Overboard. The band left the stage – but not before Keenan told us “if you look at the Opera House from a certain angle, it looks like the French Dudes from [Monty Python and the] Holy Grail”. Thanking us for supporting an entirely independent project, Puscifer left the stage, returning soon after to finish on Smokes and Mirrors, and Autumn. Ending on Autumn forewent the traditional encore of ending with an explosion, instead of ending the night on a glowing fadeout, much the same way it began.

Seeing Puscifer live is unlike any other show. Not just a gig, it is a themed theatrical experience. Mixing art, music, comedy and wrestling, Puscifer plays by their own rules. The harmonies between Round and Keenan are mindblowing, and the sheer power of Round’s voice left the crowd dumbstruck. To know that each member of the crowd essentially could have different recollections of the show, depending on if they were watching the screen, the musicians, the wrestlers, or a combination of those, really ties into Puscifer’s motto – “Life is too short not to create something with every breath we draw.”