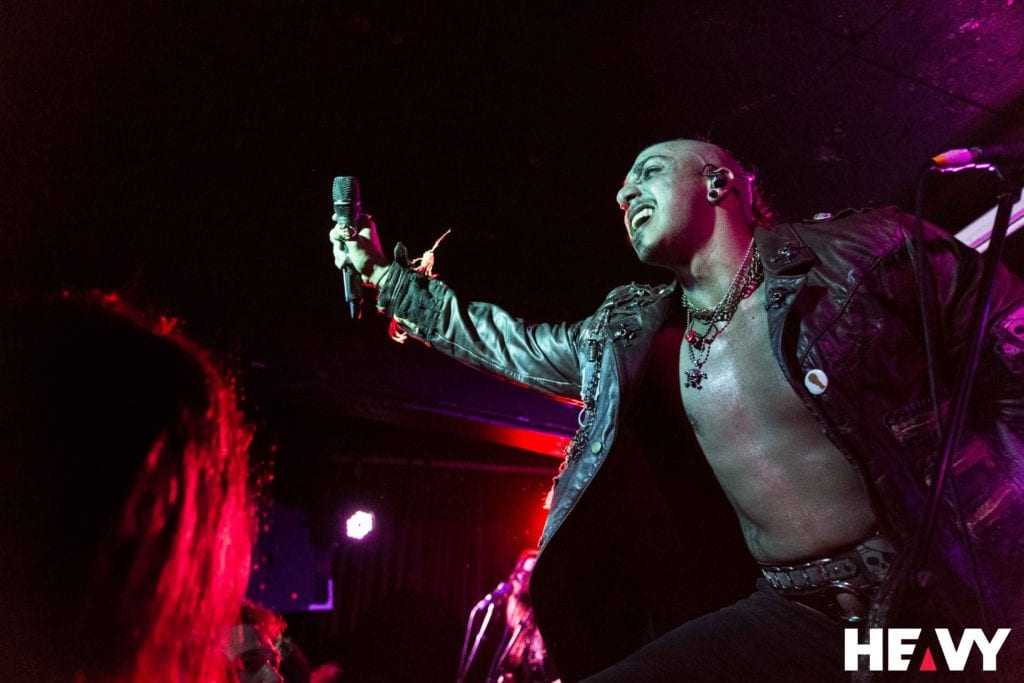 Heavy metal today is a vast, diverse amalgamation of hundreds of musical genres applying their twists and unique take on the art of distorted guitars and heavy rhytmics, and no heavy metal sub-genre is more unique and dare I say entertaining than pirate metal. Whilst bands like Running Wild and Alestorm are titans of the sub-genre, right here in Australia we have our own captains of the scene – Brisbane’s Lagerstein. Fresh off their sophomore release ‘All for Rum and Rum for All’, Lagerstein have embarked a multiple-date tour of the nation, bringing their infectious folk-inspired melodies, up-tempo rhythms and beer-soaked stage show with them. Their latest venture to Melbourne saw them play the iconic Evelyn Hotel, along for the ride as supports were power metallers Horizon’s Edge, the shred-fest that is Espionage and party rockers/goon aficionados Keggin. Being a seasoned Lagerstein gig goer, my expectations were extremely high for the Queensland seven-piece.

Keggin opened the show to a warm reception from the slowly-building crowd. Whilst their music style was quite different compared to the other bands on the lineup, their catchy hooks and direct, almost simple punk rock progression were a right joy to witness. Self-confessed lovers of goon – cask wine to those non-Australians, every song in Keggin’s arsenal had some of the most hilarious titles I’ve ever heard in my life, from their hate-filled “Smirnoff Fuck Off” to my personal favourite “Indiana Jones and the Temple of Goon”, it’s no surprise that Goon King Gaz and booze-loving band of party rockers won over the entire crowd almost instantly.

What are regarded as one of Melbourne’s premier traditional heavy metal acts, Espionage came to the stage with high expectations from not only myself but the majority of the venue’s attendees. Wasting no time in delivering their high-octane, speed-metal influenced sound to the audience. What could only be described as the Melbourne-equivalent of Swedish guitar maestro Yngwie Malmsteen, guitarist Denis Sudzuka melted faces with his take on melodic hooks and neo-classical shred, a perfect complement to the soaring vocals and extremely tight drumming. ‘Wings of Thunder’, the newly released single from the Melbourne shredders was without a doubt my personal favourite, as it showcases the level of technical proficiency and musical creativeness of every member of Espionage in 2016. My only point of criticism is that I wished bassist and vocalist Andrew Morris would step away from his rather impressive soprano vocal range and add a sense of diversity within his vocals, as I felt as though that particularly vocal style was slightly overused. Nevertheless, nit-picking aside, Espionage have proved once again why they are one of Melbourne’s finest heavy acts.

Providing direct support were epic power metallers Horizons Edge. It was here that the venue saw its first proper mosh pit – a sea of headbangers and thrahsers lost on the major-key brilliance that is Horizon’s Edge. A well-written, well-performed set of traditional power metal tracks, their sound sounded as though they were the Melbourne equivalent of the legendary Stratovarius, whilst maintaining a level of uniqueness that came with the vocal power of Kat Sproule. Unfortunatley, not all can be praised about Horizon’s Edge’s performance, as I felt as though Sproule’s vocal abilities were very limited to a higher register and whether she was just having an off night or it was intentional, her ability to deliver powerful vibrato on her voice felt quit lacking. Negative points aside, it can’t be ignored that Sproule possesses a magnificent voice that will only improve and shrug off the minor flaws with time. Guitarist Eddy Grosso was another fantastic shredder of the night, his shred-heavy, almost legato play style gave Horizon’s Edge that edge in their sound (no pun intended). Over the many times I’ve witnessed Horizon’s Edge, the band have shown consistent improvement each and every time to the point where I struggle to find any genuine issues with their live performances.

The now-intoxicated crowd began to amass towards the stage, with bodies already engaging in a subtle mosh prior to the Brisbane pirates even taking stage. ‘Raise Your Steins’ was a sublime introduction to the hours of madness that were to take place. Captain Gregarrr and his crew wasted little time in asserting their dominance of the stage and bombarded the crowd with their addictive and infectious folk-inspired heavy metal. The vast majority of their set list consisted of tracks paying homage to the central theme of not only the band itself, but the night as whole – alcohol. ‘Tales of the Fallen Ales’ and ‘Slocken the Rum’ only added fuel to the bonfire that was the massive pit of slamming bodies and drunken folk dancing. In what was a highlight of the night, Lagerstein opted to unleash their own take on Korpiklaani’s ‘Vodka’, and dare I say, it was just as good as the original from the Finnish folk metallers. Crowd favourites ‘Harpoon the Sun’ and ‘Pirate Music Piracy’ were a sublime performance of the answer to the question “What’s so good about pirate metal?”, the catchy lyrics and dance-inducing melodies added a sense of happiness and joy to the alcohol-fueled pit below.

Another highlight of the night came with their traditional performance of ‘Down the Hatch’ which was opened with a vicious wall of death from the crowd, orchestrated by Gregarrr himself. Slowing things down, ‘Drink till We Die’ saw the band make their way onto the floor and orchestrate a now-seated crowd to join together and sing the anthem with pride, with beers in hand and smiles aplenty. ‘Dreaded Skies’ and ‘Land of Bundy’ closed their main set with an almost fantical response from the crowd, with bodies flying and pints in the air as Lagerstein gave Melbourne one more reason to drink and be merry. The still-hyped crowd weren’t satisfied with anything less than an encore.

An encore performance of ‘Drink The Rum’ saw an impromptu, crowd orchestrated wall of death being unleashed as the band gave their all one more time before closing their set with ‘Beer Bong Song’ – a track synonymous with the band skulling beers on stage through massive beer bongs with the help of the members of each support band. Looking back at Lagerstein’s set, I’m left completely amazed and how tight the band’s grip on the crowd was. The dominating presence of Captain Gregarrr felt as though we were all there as he commanded us all on board the S.S. Plunderberg. Guitarists Neil Rummy Rackers and The Majestic Beast, when not engaging in friendly shoey-drinking competitions, felt perfectly in-sync all night with the rest of the band. The energetic display and stage presence of violinist and keytarist Mother Junkst was not only a joy to watch, but was incredible to see such multi-instrumental talent being utilised on stage. Keyboardist Jacob and drummer Ol’ Mate Dazzel never missed a beat and delivered a flawless performance throughout. What could not be ignored however was the absence of former bassist Phil “The Immobilizer” Philp, who’s departure left the band with a massive gap to fill, which came in the form of Chronolyth guitarist Alexander Nisiriou, who not only embraced the role perfectly, but won over the crowd with his on-stage persona as a one-shoed story of a man who had one too many shoeys.