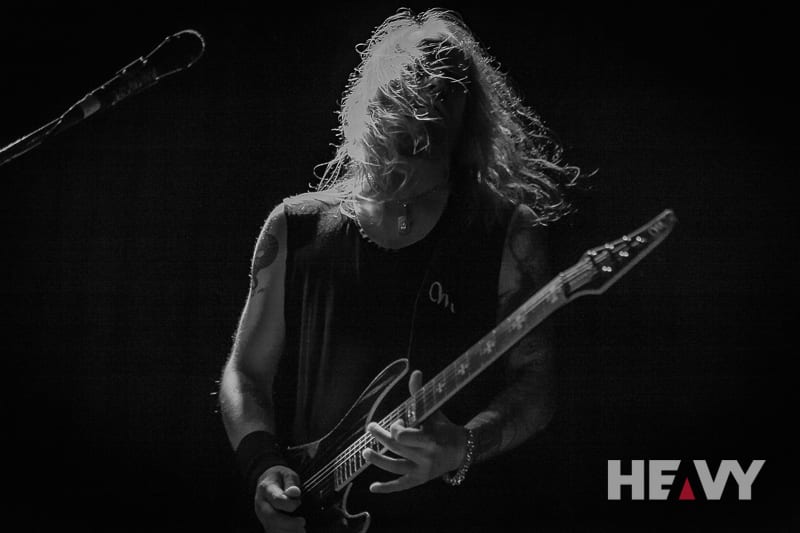 Sadly I had to work late into Saturday, so, unfortunately, I missed Meridian but did catch the incredible The Eternal from Melbourne featuring Ritchie on guitars from Dreadnaught. In all honesty, I had no idea this band existed and am so glad I had the opportunity to catch them. Their progressive brand of sombre heavy was beautiful to hear and without doubt complimented Katatonia with perfection. I am going to make sure I follow them. Having obviously no background info or anything to compare The Eternal to I was just glad to experience them for the first time.

Well… Where do I start with my Katatonia review? This is a night I had waited for, for so, SO long! The last time I had the chance to see the magnificent Katatonia was in the Czech Republic at the Brutal Assault festival in 2014. Unfortunately, on that evening, their gear malfunctioned at once so, what was supposed to be a one-hour set turned into about twenty-five minutes give or take. It was for this reason that tonight the air was thick with anticipation for me personally.

Many awe-inspiring nights of sheer musical excellence have been performed and witnessed at the Corner by us punters at least once in our gig attending lives. It is renowned by many of us Melbournians as being one of the last bastions of incredible live music venues in this country. Known for having an amazing sound regardless of the crowd size. Unfortunately tough, Saturday night’s gig experienced some sound difficulties and sadly the amazing entity that is Katatonia we’re the unwilling and unworthy victims. While Jonas Renske’s vocals were brilliantly mixed, and the keys/piano backing were always perfectly audible, the guitars of Anders & Roger suffered terribly and were for most of the evening barely audible which diminished from what was a near perfect performance from Katatonia. It was only during three songs that the bands FULL sound perked up and we could hear Katatonia as a full entity. But from where their magnificence resided neither the band nor the crowd knew or cared ultimately because I think we were happy to be witness to Katatonia doing what they do best. We heard and experienced tonight the elder statesmen of doom/goth/sombre type metal at the top of their game. Sound glitches aside you could see, hear and catch magical moments of just why Katatonia are so revered and loved.

I did weave my way through the sold-out crowd to behind the mixing desk to see if I was missing something from my punter vantage point, but it seemed that there was a sound issue that just could not be rectified.

It is a little disappointing in this day and age of hi-tech there that there is a bad sound mix at gigs. What was mildly upsetting is that one of the world’s best goth/metal bands with twenty years behind them on their first headlining tour of our country suffered, in my opinion, one of those ‘handful’ of bad sound nights. However, I think in the eyes of the crowd it wasn’t an issue; it was for me, though.

Katatonia’s set list was exactly what we expected, wanted and nothing more. It is hard to choose a bad or even mildly weak song off any of their releases but when they hit the mark, they pen something truly special, and that is what Katatonia gave their Melbourne fans last night. (I did love the irony of playing ‘Last Song before the Fade’ first.) I truly believe that the Corner is one of those venues that was built exclusively for many particular bands, Katatonia most definitely being one of them.

Let’s not kid ourselves, though; this review is entirely dedicated to the angelic Jonas Renske’s voice. He was flawless in every way last night and it was certainly an honour to hear him sing to, NAY…Serenade us.

Highlights for me ‘Old Heart Falls’ ‘Serein’ & the obvious ‘Leaders’ & the near perfect ‘My Twin.’

Though this was an evening that certainly suffered from some front of house mixing issues we love Katatonia enough to forgive a fault that was not in anyway theirs.

Setlist:
Last Song before the fade
Deliberation
Serein
Dead Letters
Day and Then the shade
Serac
Teargas
Ghost of the Sun
Evidence
The Night Subscriber
Soil’s Song
Old Heart Falls
For My Demons
Leaders
In the White
Forsaker
Encore:
My Twin
Lethean
July