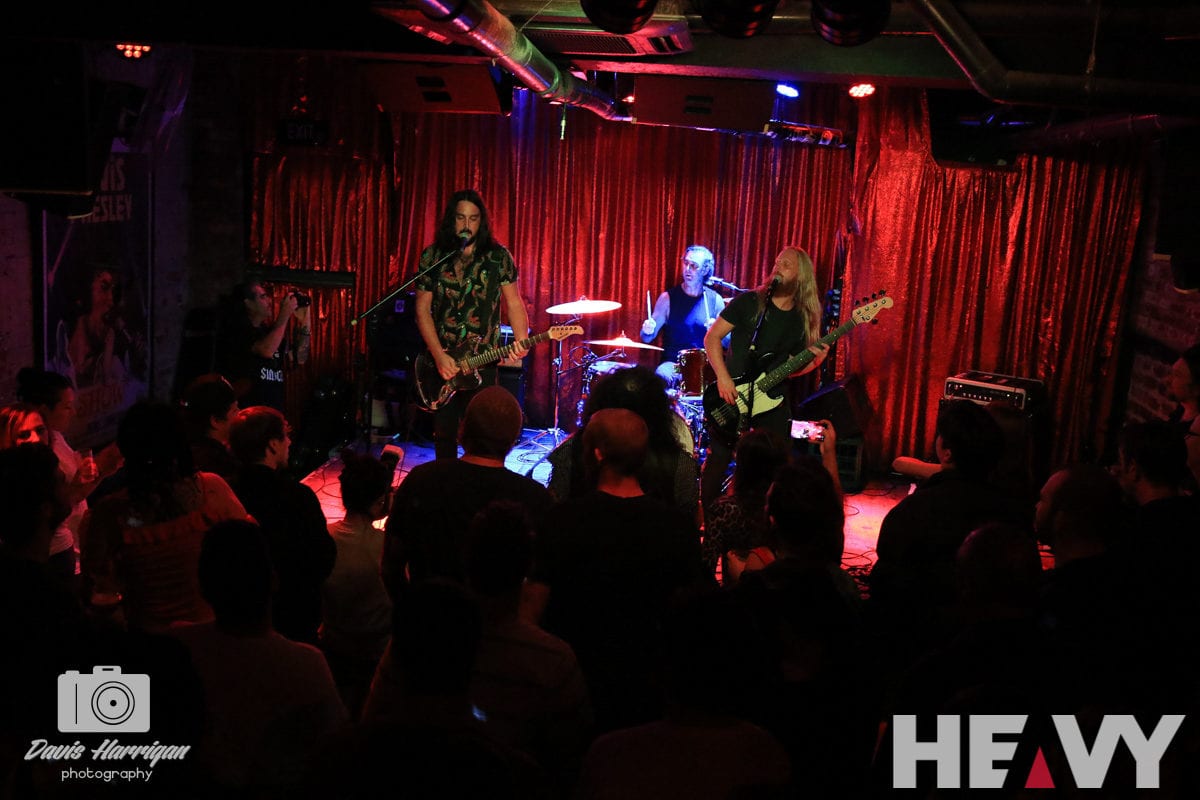 Ah, Cherry Bar, we meet again.  On a balmy Autumn night in the city of Melbourne, AC/DC Lane tuned the dials into rock and roll for another dose of top-notch music.

Grasshole return to Melbourne after a super-successful Australian tour, and on the back of launching album “Fuzz of Flavour”, this show is the big bang at the end of the road to show off the new product.  The album is 13 tracks full of catchy, rocky tunes that you never want to turn off, and get up and move till your legs can move no more.

There was no shortage of super support beforehand, too.  The Deadlips, The Balls and Palmerslum ramped up the stage shredding to 11 in a local music fiesta and a local line-up dripping with talent.

The regularity of gigs that The Deadlips have played in recent months have paid dividends, for a tighter, heavier and blues-infused set that can’t be missed anymore.  Their 2017 EP release, “The Remedy”, isn’t done justice on a CD; rather, it’s brought to life on the stage.  Opening the night with “Bandaid”, vocalist Madi O’Shea and guitarist Hugh Kirne were a pair on a mission, determined to make the small crowd at Cherry enjoy themselves.

Some “new-ish” tunes were introduced, as O’Shea put it, launching into what the setlist described the songs to be – “Ballad” and “Idle”.  These are not on the EP, but are extremely enjoyable.  It’s the synergy that courses through the band’s veins that generates such an excitement.  The blues-rock set continued with “Stranger Blues” and the epic “Space Rat” – a song that is definitely a favourite with the band.  It’s punchy, it’s loud, and it had Cherry reverberating with a series of loud “whoops” – the customary sign of a good set.

Nothing prepared the punters for what was about to be unleashed from hard rockers The Balls.  With a Fender tuned on steroids, the trio exploded with half a dozen shots of 80-proof, smoking songs delivered straight from the barrel.  It was like the Cherry fire had been ignited, and you were standing right in the middle of the blazing assault that these guys delivered.

Sending “Heavy” straight out into the wild, it was so clear The Balls were ready to have a fun time shattering a few ear drums.  It was a salvo of pure, unadulterated blast-your-face off hard rock, like a spell you could not break.  Every single ounce of energy was directed in watching these guys shred up the stage.

“Fourth of July” was perhaps the heaviest and biggest track from the bands EP, released in 2017.  Frontman and guitarist Ryan Page had sweat dripping from his forehead as they blasted into “Last Drug” and “Easy Truth”.  Make no mistake, these guys come at you like a freight train and are wicked to get the juices flowing on the dance floor.

Last song “Subtle Man” wasn’t so much subtle as it was a kick in the balls, no pun intended.  The Balls left their mark, and then some.

However, it was Palmerslum that really struck a chord with the now buzzing Cherry crowd with their punk-inspired, up-tempo set.  Cherry doesn’t often have a “mosh pit” of sorts in its small space, but this next trio only needed a few more through the door to really cause a bit of a stir.  From getting stoned with “Bus Stop”, into a bit of “Mortgage Breakers” and the cracking “Drainer”, the name is deceiving, but the band are synchronised, quirky, and fit themselves into a rather exciting niche.  Everyone can relate to their song “iPhone”!

Everything built to the crescendo with Grasshole, and these guys meant absolute business.  The “Fuzz of Flavour” album is fresh, it’s an almighty good listen, and absolutely crushed it at Cherry.

There’s something about opening track “The Reckoning” that made you want to reach out and grab it with both hands and put it on repeat.  Another thing, too: the album sounds 100-fold better live on the stage, like vocalist/guitarist Karis Hawkins, drummer Rick Hawkins and beloved Swede bassist Fredrik Svensson had a brainwave to make it so.  It’s not always often such a thing occurs, but it has here.

Like one big cannonball, they launched into “Fragile” and “Piracy” with ferocity.  By this time, everyone had crammed forward to surround the stage, and the air was awash with beer smells and guitarist sweat.  Grasshole paid tribute to the King with a rousing cover, and included their take on Tinder…gone bad and burned to a shred.

It’s done so well and still captures the essence of rock and plenty of flavour is packed into one setlist.  Grasshole blew the Cherry roof off with “Game of Drones”, by far the hardest-hitting track on the album – their encore met with shouts of “one more!” – twice!