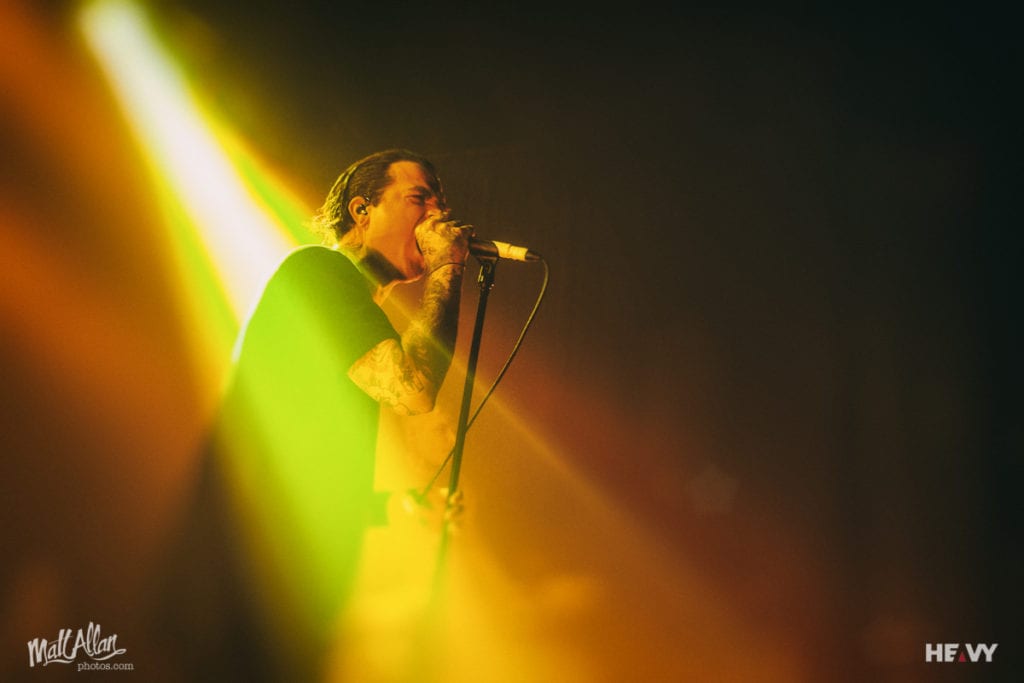 With spring on the horizon and winter making its final day no so cold, Brisbanian (Gympie) lifesavers and post-hardcore heroes, The Amity Affliction, returned for another round of shows in the country. This time supporting their latest full-length album “This Could Be Heartbreak“. Coming from headlining a festival to sharing arena stages with A Day To Remember last year, Amity decided to make it a little more intimate with their fanbase in a few cosey venues to celebrate.

With the procedures underway, tagging alongside Amity on the tour were their hometown mates Sensaii, who began the show with a promising stage presence and chic with their own dosage of alternative metalcore for their first time in Melbourne. The five-piece had already gained a nearly packed out audience in the venue with a lukewarm reception from all the Melbournian locals that started to become familiar with them.

With their lead vocalist Rowan Herbert going from clean to aggressive, sharing the mic with guitarists Chris and Shaun also jamming out a mix of punk and melodic notes from their six-stringers, Sensaii delivered an escritoire of different vibes.  The set came across as an emulsion of singalongs and straightforward and upfront in your face tracks.

Personally, while the crowd didn’t give much of a reaction until after each track, whether they would be screaming or moving, I felt that Sensaii deserved a bit more love in terms of their agenda onstage, seeing as no matter how hard they tried to get the crowd going with moshing or clapping along, it was undeservingly ephemeral.

Driven Fear had the more energetic persona during their time slot, even though they hadn’t gotten the biggest physical response in the pit from the punters like the Sensaii experienced. However, it wasn’t stopping the Queenslanders from belting out the hardest of hardcore tracks they could conjure up.

Frontman Tim Hyde called out, “You cunts look stale!” and giving the audience the idea that they should try and get a little silly while Driven Fear was playing. Hyde eventually had one of his requests made when he asked for a circle pit that went off like wildfire, which later resulted in a handful of people moshing throughout the remainder of the set.

As the main support act, Trophy Eyes came on with one hell of a lively audience thrashing through their heavy party vibes, feeling like it turned into a Cypress Hill concert. Vocalist John Floreani had a fan calling out to him saying he loves him, and would later reply saying that he wished there were more fans like Billy, whose real name was Bryce.

As their show progressed, Trophy Eyes witnessed nothing more than one hell of a waterfall of crowd surfers along with plenty of moshers going absolutely bonkers at an incredible velocity when the punk quintet jammed out to a number from their “Mend, Move On” and upcoming “Chemical Miracle” albums. All in all, the Newcastle natives gave every bit of eminence into their set and got back a great amount of admiration from their fans, as well as their newest ones that finally had the opportunity to witness Trophy Eyes in the flesh.

All in all, the Newcastle natives gave every bit of eminence into their set and got back a great amount of admiration from their fans, as well as their newest ones that finally had the opportunity to witness Trophy Eyes in the flesh.

Moments after Trophy Eyes finished, there would eventually come an assembly of the attendees singing to Matthew Wilder’s Break My Stride as well as Journey’s Don’t Stop Believin’ to get Amity fans ready for what was to become.

The very second the lights faded everyone rushed to the front. As soon as The Amity Affliction walked on, there was nothing but extreme dedication coming from the voices and movement of their longtime devotees. Smiles were all over, tears were shed, lyrics were sung straight from the voices of those that poured their hearts out, all through the process of each tune that was executed by the quartet.

Whether they played Open Letter, Chasing Ghosts, Death’s Hand or Don’t Lean On Me, it seemed that every second that went by, everyone of 170 Russell’s punters lived the hell out of each moment throughout Amity’s gig.

In most cases, the bands are usually the ones responsible for orchestrating their audience. However, it seems that because of all the devotion coming from their fellow Youngbloods, it was Amity being orchestrated, which led to them putting on a remarkable recital thanks to their heavily staunched and faithful followers that have supported them for so long over the years.

From the last few times I’ve seen The Amity Affliction, I’d have to say that this was their most incredible and highlighted performance so far.