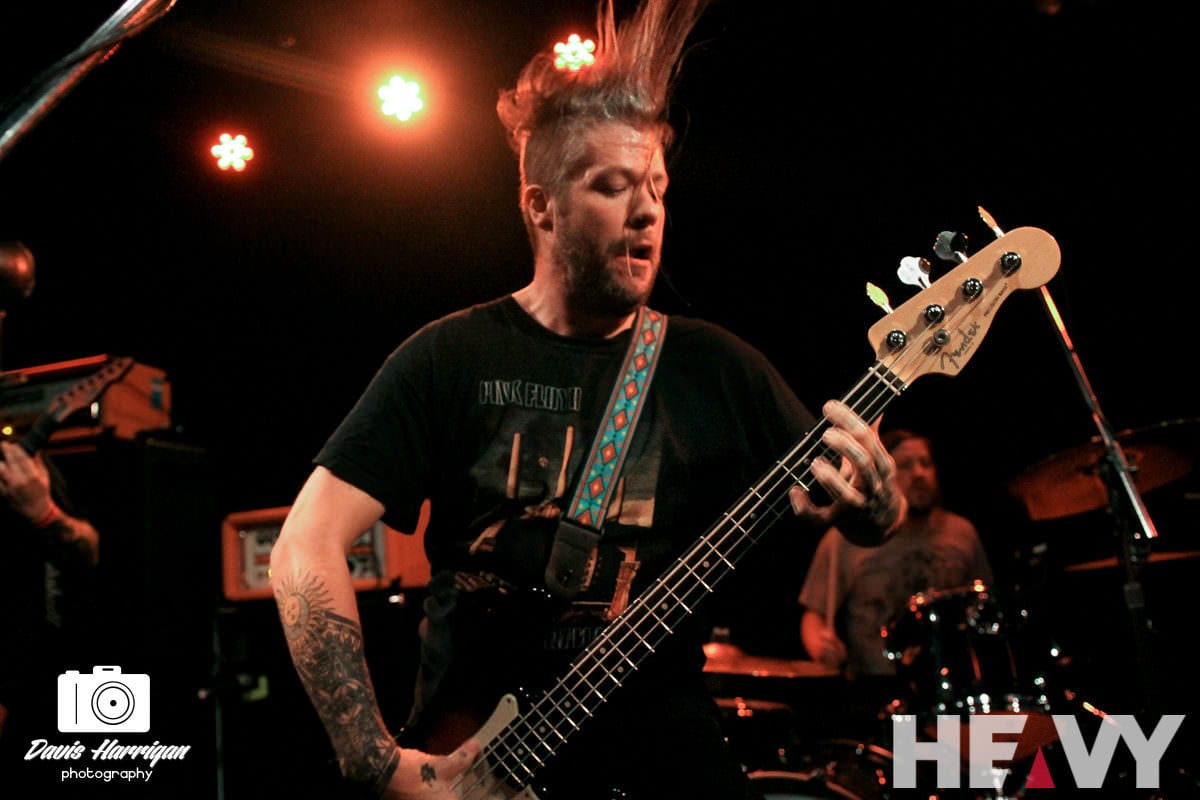 Arkansas heavy rockers Pallbearer wrapped up their whirlwind Australian tour at the Northcote Social Club to a rapturous reception and dedicated fans packing out the venue.

The band last visited Australia two years ago, and this time they brought a new album with them; Heartless. They weren’t the only ones to be enjoyed on stage that night, though; duo Agonhymn and respected Melbourne unit Holy Serpent helped farewell Pallbearer across the Tasman to New Zealand.

If you’ve never been to a gig or heard a band playing consistent “extended” songs, look no further. The night had three of them. It’s edgy, it’s cool, and it’s so much fun.

Agonhymn doesn’t say much – the instruments did most of the talking. Dave Byrne on guitar left nothing to chance, caught in the moment of deep melodic power and doom rock in the tunes the duo has put together. Liam Brewer on the drumkit, and donned in a beanie to beat the cold weather, brought together a sound that seemed like it had a bassist but didn’t.

The deeper undertones of tracks that have been nicknamed “Blues Grind”, “Chicago” and “Goat” may involve little lyrics, but they did involve a thought-invoking experience that only started to build the avalanche of music.

When Holy Serpent stepped on, visuals and all, business was serious. The sound of a beautiful Maton guitar stepped down into the brooding levels of the heavy, grooving, dark rock the band does so well surprises, but then it’s forgotten as “Toward The Sands” rips out through the amps.

It’s Scott Penberthy’s frontman presence as vocalist and guitarist that is indicative of the power and passion behind the band. All you want to do is grab the music by the balls and headbang the entire set to a group who know how to command the stage.

With “Fools Gold” and “Purification by Fire” pushing the bass scale during their set, Holy Serpent are a beautifully oiled music machine. Last year’s “Temples” release gained serious momentum, and Holy Serpent continues to ride it.

Then, the main event: Pallbearer. Ninety minutes of pure, unadulterated, top-shelf doom and melodic rock to blow your socks off, that takes the studio and album versions of the songs to new heights. Bassist Joe Rowland was an instant eye-catcher, with hair flicks and string picking galore. It was next-level flare and a rock symphony, adding to the unique dynamic of the American group.

If “Thorns” from the Heartless release didn’t get the full crowd going, “Fear and Fury” and “Dancing In Madness” did. It was like the heavy gears went from 10 to 11 or higher and the crowd moved in sync. Main vocalist and guitarist Brett Campbell left nothing in the tank; it was delivered wherever you look.

Headbanging is criminally underrated, but Pallbearer got the room working as they went deeper into the set under a spectacular light show. Drummer Mark Lierly smacks the heads and cymbals hard. Very hard. But it’s all part of the dazzling show.

Tracks such as “Worlds Apart” and “Devoid of Redemption” start delving into Pallbearer’s catalogue, and the real fun began. The distortion amped up, followed suit by menacing guitar riffs, the crowd lapping up each and every note.

“I Saw The End” and “Devoid of Redemption” gave no indication of stopping, as Campbell belted out the lyrics and the crowd never took an eye away from the stage for a second. It was an energy that draws you in; Pallbearer makes songs that go for seven or eight minutes seem awesome and eventful.

Pallbearer definitely did not want to leave the stage after setting the proverbial fireworks with “Foreigner”; the genuine want to be on stage and deliver a fantastic show from start to finish never wavered. Doom rock never sounded so good, either.

PrevPrevious.[LIVE REVIEW] Touche Amore and Turnover at the Triffid, Brisbane on 05/07/17
Next.[LIVE PHOTOS] PRIMORDIAL and Vomitor at The Bald Faced Stage, Sydney on 8/7/17Next