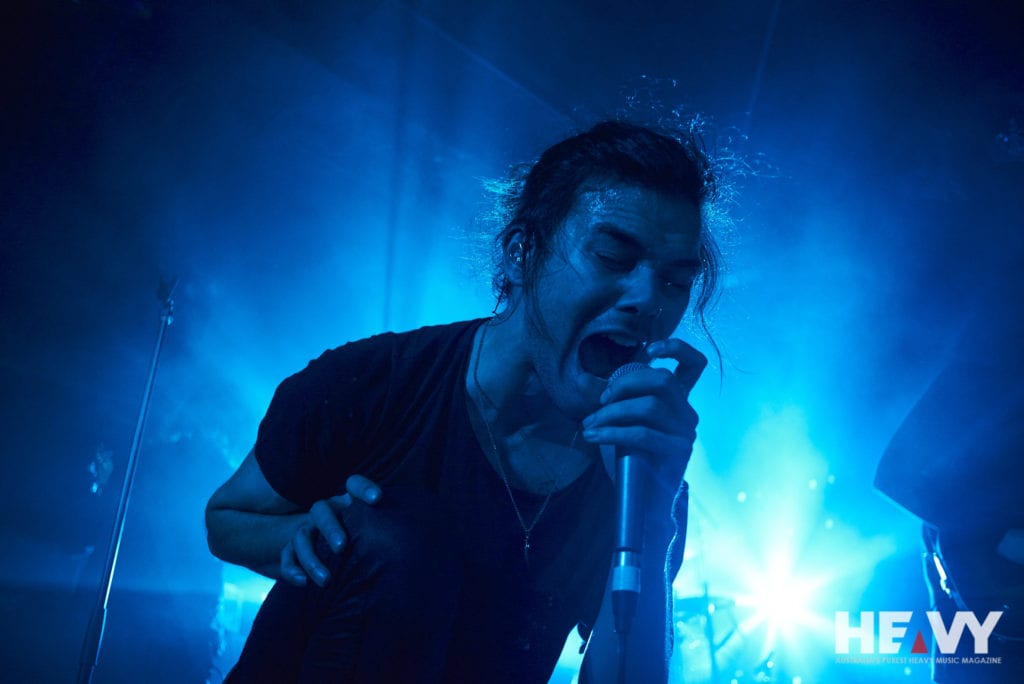 Nothing quite describes a hot mess like The Corner Hotel on a 30-degree evening while three of Australia’s most exciting hardcore acts tear the place to shreds. It was the good kind of a hot mess, though if such a thing can ever possibly exist.

Polaris warmed up the already heavily perspiring crowd with ease, with their sheer energy and enthusiasm extending its reach to the far corners of The Corner. Polaris defied the typically lacklustre crowd for the first band on the bill and instead drew a near maximum capacity audience extremely early in their set; no doubt a result of the enormous success of the band’s EP The Guilt and the Grief released in January this year.

The half hour set showcased the astounding vocal capacities of both frontman Jamie Hails and bassist Jake Steinhauser. Soaring guitar melodies and vocal lines in crowd favourites L’Appel Du Vide and Regress balanced out the palpable heaviness of the band’s other tracks and demonstrated just how tight Polaris are from both a musical and performative perspective. When there’s a crowd running laps around the pit for the opening band, it says it all: Polaris are fucking good.

Up next were Sydney’s Hellions, who put on a show, unlike anything I’ve seen before. Confidently defiant of restrictive genre boundaries, Hellions combined their signature sound with the excitement of a band so comfortable and so proud of the music they’ve worked to create. At times I wasn’t sure whether I was at a hardcore gig or a funk gig, which made their performance all the more entertaining, and it was clear that the crowd and band were feeding off the other’s energy.

Opera Oblivia, the band’s latest and most experimental release proved itself in a live setting: Lotus Eater and Nightliner Rhapsody transcended pop punk-esque vocal hooks and instrumentation to become colossal live tracks while closing song Thresher rounded out Hellions’ performance with a bold assertion of their performative creativity and energy. Special mention to drummer Anthony Caruso, who struck every single part of his kit with guts from start to finish and didn’t once miss a beat.

I want to preface the following recount of Northlane’s performance by saying that for a band to have such a consistent, distinct atmosphere at every single show they perform, it is a colossal and enormously admirable feat. Even before the first notes of Rot filled the humid, buzzing venue, I can confidently say that everyone inside was eagerly anticipating what Northlane were going to deliver.

Of 13 songs, two of these saw the band revisit 2011’s release Discoveries, arguably the album that propelled Northlane into the top end of the Australian hardcore scene. 2015’s Nodes and 2013’s Singularity also featured heavily and served to demonstrate the exponential growth of the band over the last five years. The massive reception of Dispossession was unbeatable, and equally resounding tracks Metamorphosis and Impulse saw the crowd completely let loose. Marcus Bridge’s vocals were as sharp as ever, the atmospheric melodies cut through the thick air, and the rhythmic elements of the performance were unwavering.

Dream Awake and Worldeater were, for me, the highlights of Northlane’s set. The enormous contrast between the slow, ethereal vibes of the former and the aggression of the latter theoretically seems like two entirely contrary ideas; the reality, however, is that these elements perfectly encapsulate the vast range of everything Northlane have to offer through their music. To experience both ends of the spectrum in the space of 90 minutes is truly something special.

Quantum Flux and an encore of Obelisk rounded out the show with the same energy that it began with. When the sheer quality of your live music is as refined as is that of Northlane’s, there’s little reason to detract from that; minimal lighting and crowd interaction ensured the attention of everyone in the room was on the music, whether it was listening from a distance or (very) actively participating in the pit. The result? A captivating and above all positively exhilarating performance, yet again, from one of Australia’s biggest and best hardcore acts.