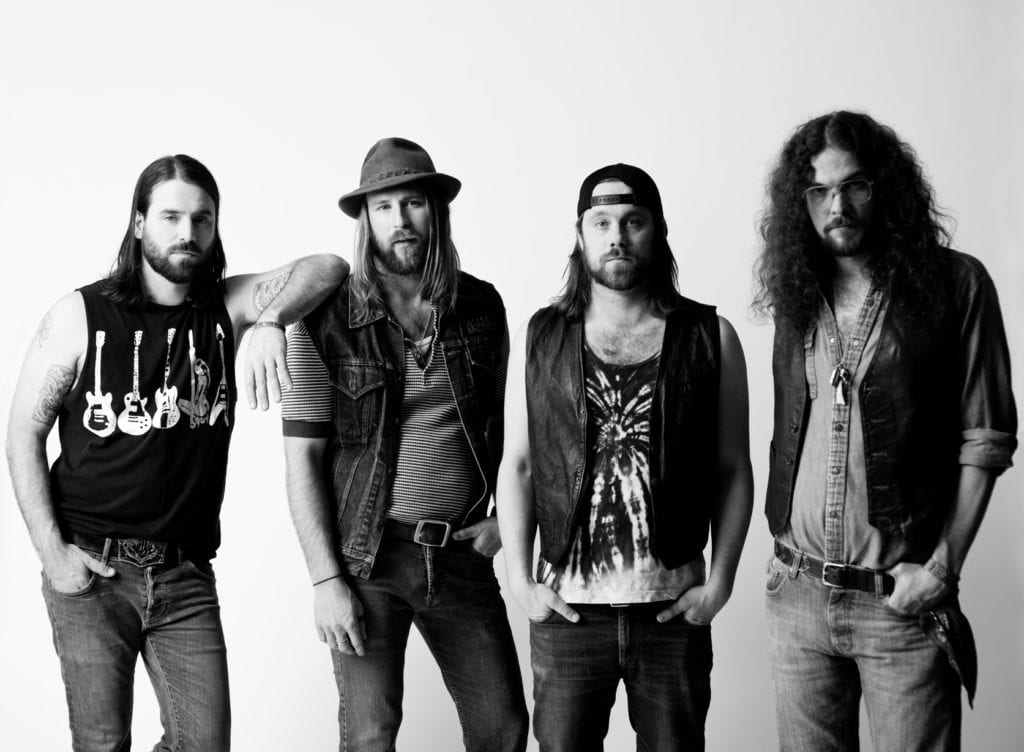 The bashfully small Manchester Club Academy has been host to many a hard rock act, but it is unclear how it managed to contain the extravagantly vociferous sound waves produced by Monster Truck and The Picturebooks on 18th March. Whilst these bands boast records filled with dominating jagged-edged rock, the full potential of the power their music holds can only truly be appreciated in such close quarters as the Club Academy, where every bone in the body reverberates in a special kind of call-and-response to the colossal energy these bands summon.

It feels almost insulting to have to give The Picturebooks the label of ‘support act’ due to the command they held over the venue. Comprising of drummer Phillipp Mirtschink and guitarist/vocalist Fynn Claus Grabke, from the very get-go of their first track PCH Diamond, The Picturebooks played with the sort of violence found only within the confines of a Roman Colosseum combat. Mirtschink exhibited transcendent conviction with every thump of the drum, evoking a power to rival tribal drum ceremonies. Mirtschink’s laboriously produced sweat bounced off his drum skins as though in recoil from a Tyrannosaur’s footsteps during gritty tracks like Bad Habits Die Hard.

The Picturebooks awoke fascination with every twist and turn of their performance. Mirtschink demonstrated a masterful employment of various bell instruments and called upon John Bonham’s Moby Dick spirit in his frequent bare-hand drum slapping, whilst Grabke excited via a mouth-to-guitar-strings manoeuvre. Grabke exuded the confidence of a wild black stallion and every strum of his Gibson was a rumble of blues thunder.

Once the dust had subsided from The Picturebooks’ set, Monster Truck swaggered on stage with the might of four pride-leading lions. Truck radiated a definitive air of authoritative presence, instantly inflaming the crowd with opener Why Are You Not Rocking? Ringmaster Jeremy Widerman was analogous to a Tasmanian devil whirlwind, perforating every inch of stage with his hard-hitting riffs and performing with such rigour that it was half-expected that he’d kindle a blaze that would impress mighty Hades. Frontman Jon Harvey sung with a snarl that perfectly emanated the band’s slogan ‘don’t fuck with the Truck’, whilst drummer Steve Kiely remained an understated driving force. Brandon Bliss’ keyboard playing is a delightful enrichment to Monster Truck’s rock formula, filling the room with a twinkling mist on tracks such as For The Sun. For The Sun was a particular highlight, eliciting soaring vocals from Harvey, shimmering cymbals from Kiely and caressing guitar solos from Widerman that one struggled not to musicgasmically moan in pleasure at.

Monster Truck worked for every ounce of applause they received, with every song a continual crescendo of passion and furore from both audience and band. Truck’s trademark strutting staccato rhythms, as in The Lion and New Soul, packed a punch vigorous enough to knock out Rocky Balboa. Despite the command Truck held over the audience, they remained ever-humble, smiling with disbelief at the chanting of the crowd during Sweet Mountain River like deities looking upon their creation with glee.

The Club Academy provided an ample enclosure to enable magnified ricochets of Truck’s songs of defiance such as Don’t Tell Me How To Live and For The People so that the crowd boiled and bubbled over with mirrored defiance. Truck could easily provide a globally suitable anthem of protest to instil an energy force insistent enough to counteract the oppression of the masses. Inevitably due to ripen into an arena-cramming band, enjoying Truck face-to-face in intimate venues like the Club Academy is a thrill not to be missed.

To buy gig tickets and get your hands on Monster Truck’s latest album, ‘Sittin’ Heavy’, head to http://ilovemonstertruck.com/

Catch Monster Truck on tour with Deep Purple in Europe: