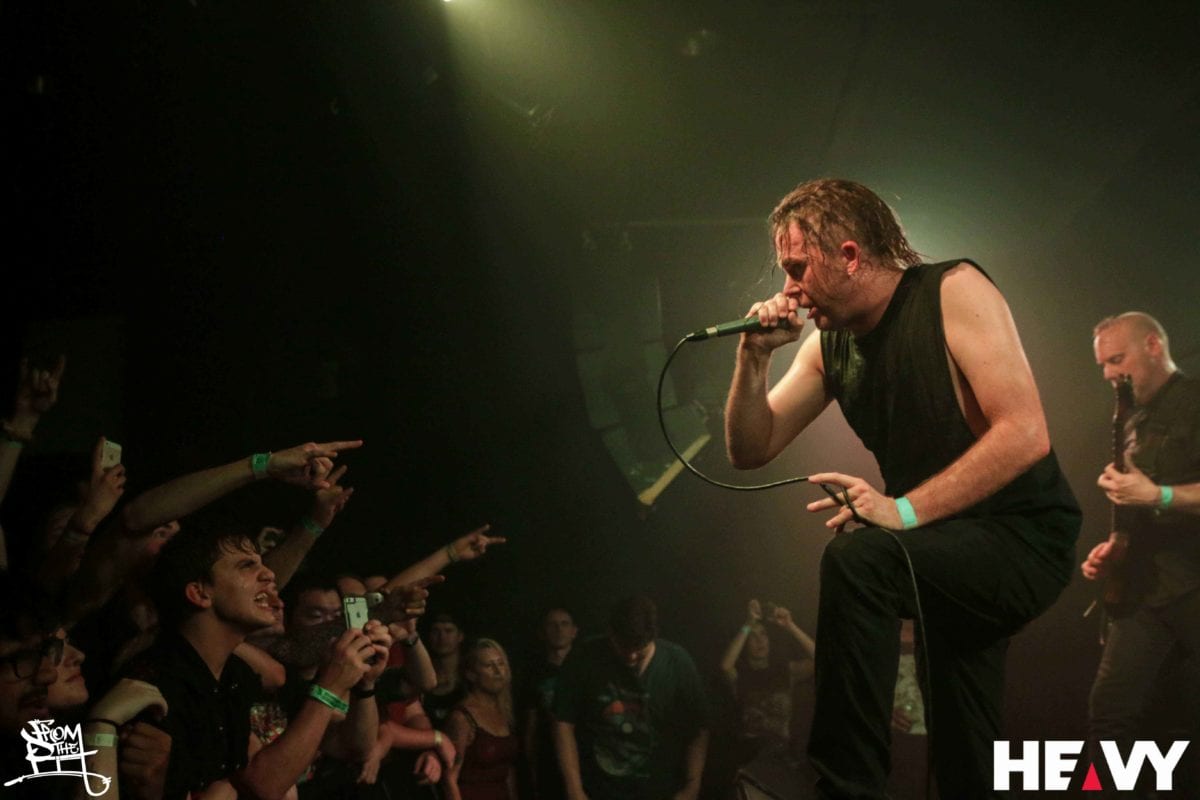 Aussie extreme metal fans have been very patient in their wait for a second Cattle Decapitation tour since supporting and demolishing Thy Art Is Murder last time here in 2013. And also patient since their latest offering The Anthropocene Extinction album dropped two and half years ago in 2015 to well deserved worldwide critical acclaim. Was this romantic and intimate Valentine’s Day date with Cattle Decap worth waiting for? We’ll talk about that a bit further down shall we.

Firstly, I must address and so should many others the massive elephant in the room that is the ongoing lack of quality front of house mixing and sound that is ALWAYS the case at just about every metal show at The Corner Hotel. This is a quality venue with an excellent FOH P.A. system that is more than capable of pushing out the desired mix that EVERY single band that plays there deserves but on far too many occasions over the past twelve to eighteen months, as was the case this evening, the audience are left with a lacklustre sounding gig from amazing and excellent bands that we the punters pay to see and are given nothing short sometimes than more than disappointing. ‘Nuff said!

Next up were the always killer and crushing Melbourne locals Hollow World, commanding the stage with their blisteringly tight set of some of the best and technically proficient melo-death this country has produced. I have seen these fine lads support a few major international acts over the course of the past twelve to eighteen months and I am always so awed watching how they command and conquer both the stage, their fans and audience as if it was their night headlining. The quality of their songwriting and musicianship carried from recording to live is awesome. The way the five of them play so blindingly fast and melodically and cohesively is a true pleasure to see and experience and frontman Ben’s ability to take control of the masses is something else. Check out Hollow World is you haven’t yet, I promise you won’t be disappointed.

Thirdly and main support for the evening was Tassie’s death kings Psycroptic. Here is a band that everytime they step on stage just raises the bar for whoever preceded or is proceeding them. Psycroptic are just heavy as fuck unrelenting in your face technically amazing fluid, melodic, near perfect death metal. They are also that band that gives us a new album and what we hear is always above par, but then delivered live is truly something special. I have also seen and even supported Psycroptic a few times in the past year and each live performance is as stand out, sweaty, aggressive and punishing affair that leave the crowd sore yet satisfied as fuck. Tonight’s performance by Psycroptic was no exception and a true indication of why we metal fans in Australia are truly spoilt and blessed with the likes of Psycroptic and have no real need to fork out excessive amounts of our hard earned to see bands that are as incredible as our own homegrown.

And now, our perfect and intimate Valentine’s Day date with Cattle Decapitation. As mentioned previously, the quality of audio mixing for all bands was mediocre and did in some ways ddisappointingbut I won’t’ let this detract from the actual performance of our beloved Cattle Decapitation. Seeing and experiencing these blokes live is truly an overwhelmingly brilliant and memorable event. Having watched their videos delving into the inner workings of song writing and overall structure of their songs and knowing the intricacies and final output of final release of albums, hearing them on vinyl is always an absolute pleasure and full of so much extreme magnificence, especially where Travis Ryan‘s vocal diversity and effort put in to pushing his voice to discover new and amazing sounds we wait for that one moment such as tonights show where we can experience and immerse our senses into all the focus and effort that Cattle Decapitation put into both their songs and albums and walk onto a stage and prove without doubt or question why this band are one of the most proficient, forward thinking and punishing extreme metal bands in the world. Cattle Decap are now eight albums in but tonight at The Corner was all about their last two album primarily in 2012’s Monolith of Inhumanity & 2015’s The Anthropocene Extinction. And let’s be honest, the earlier releases are exceptional death/grind slabs of awesome but it was Monolith where that bar was raised and Cattle Decapitation were born anew and found something truly special in themselves and their chosen genre and it was then that the world took real notice purely because of how Cattle took to writing and structuring their brand of extreme music and turned the way we hear how something so brutal and incomprehensible can be harvested and manufactured to perfection. And I guess this is why they chose to stick to their latest two release with the exception of one track ‘Regret and the Grave’ from The Harvest Floor.

From the opener of the night, the first track from Monolith, ‘The Carbon Stampede’, all five members of Cattle were rabid beast pummeling the audience with as much gore, grind, world hate and respect as they could muster. As a punter alone one could easily question how a band of this calibre and extreme output can put on a show with this intensity every single night. Travis steps out of his flesh and becomes a man possessed and Josh on guitar plays razor wire sharp guitar live that is something else to behold. The two of them combined commanding and shredding their audiences every sense tonight exceeded all expectations and was well worth the two and a half year wait. The standout for the evening for me was ‘A Living Breathing Piece of Defecating Meat’, ‘Not Suitable for Life’, ‘Manufactured Extinct’ and of course the family favourite ‘Forced Gender Reassignment’. I won’t try and articulate anymore just how brutally beautiful this Valentine’s Evening spent with Cattle Decapitation was. They exceeded all expectations and left us salivating at the hint of a new album soon. 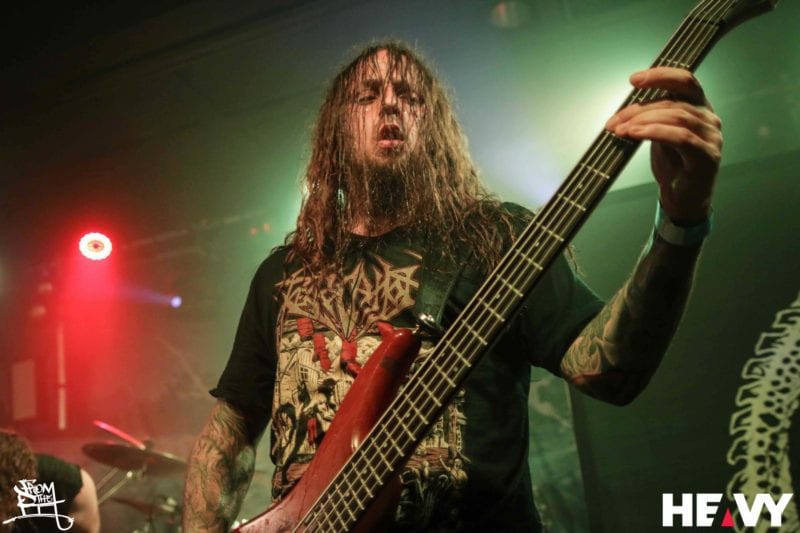 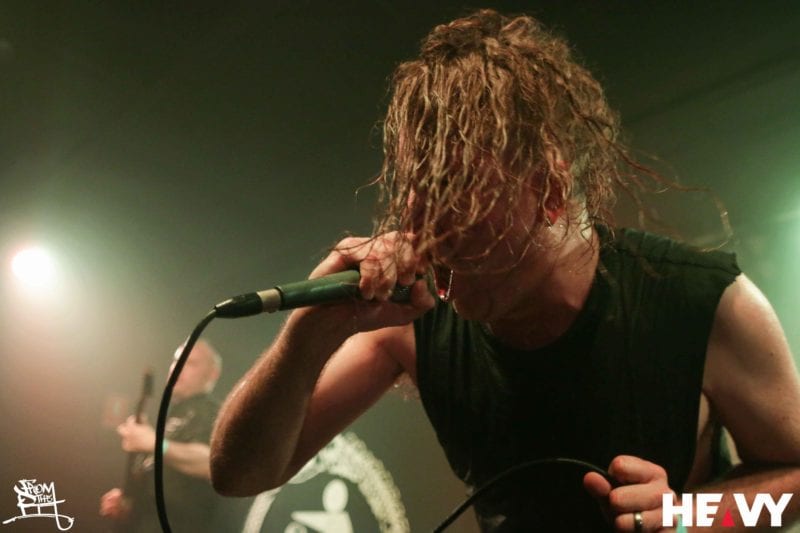 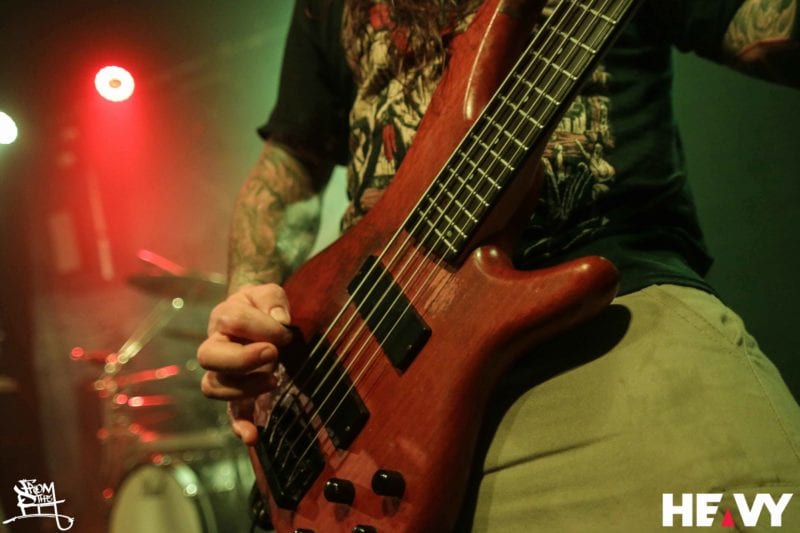 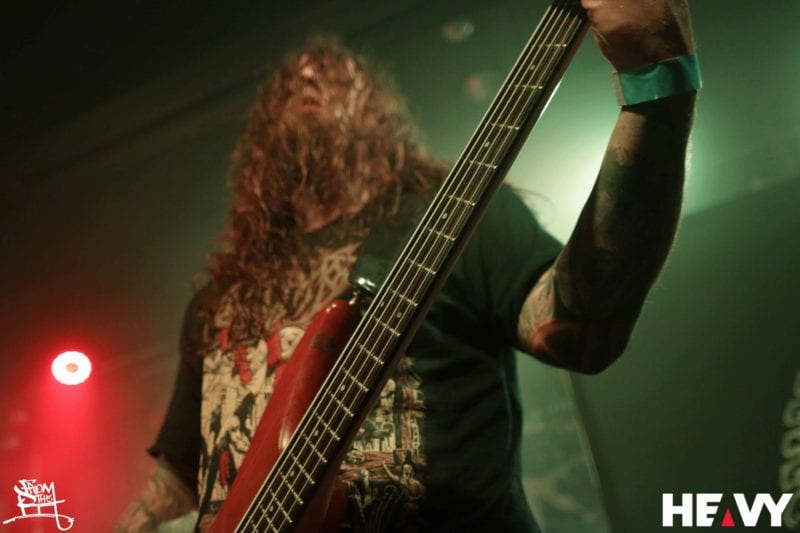 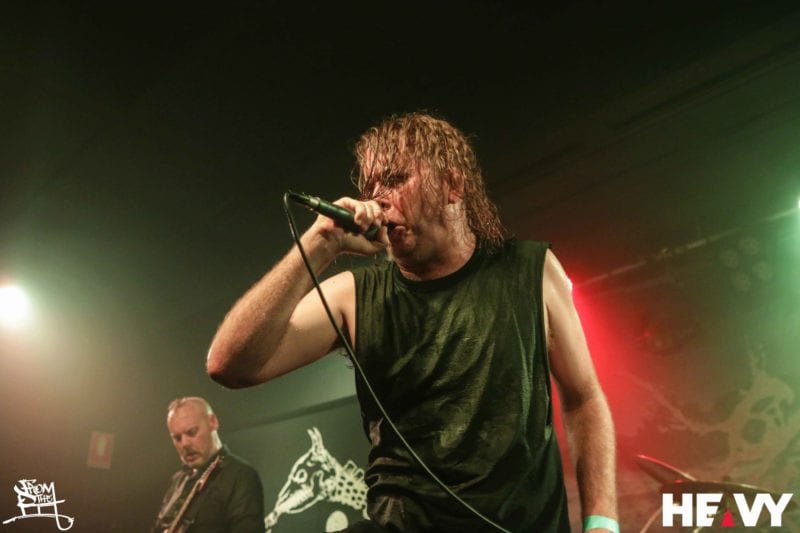 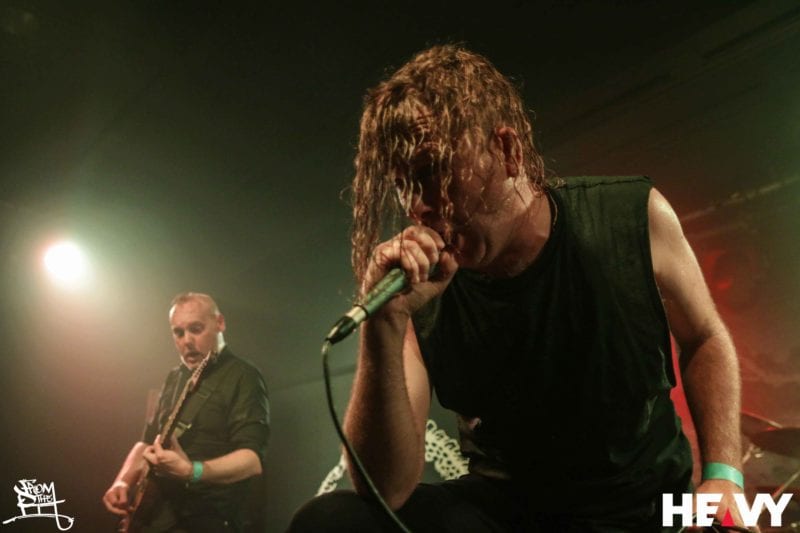 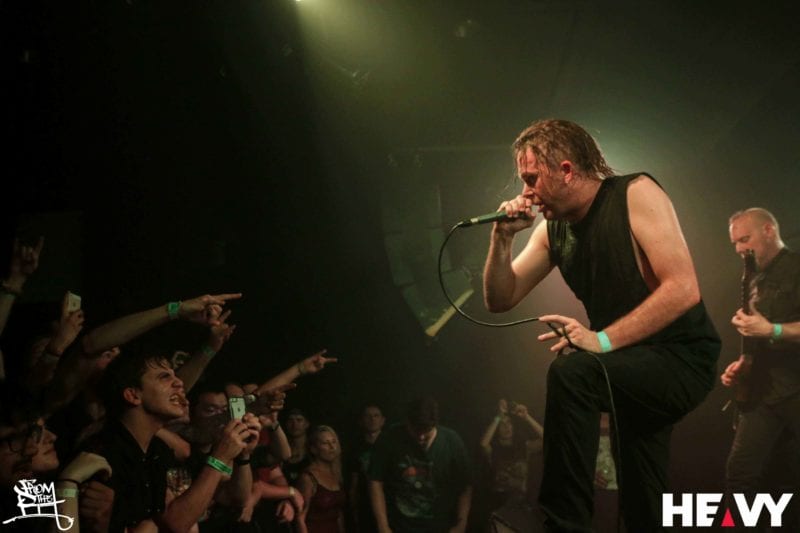 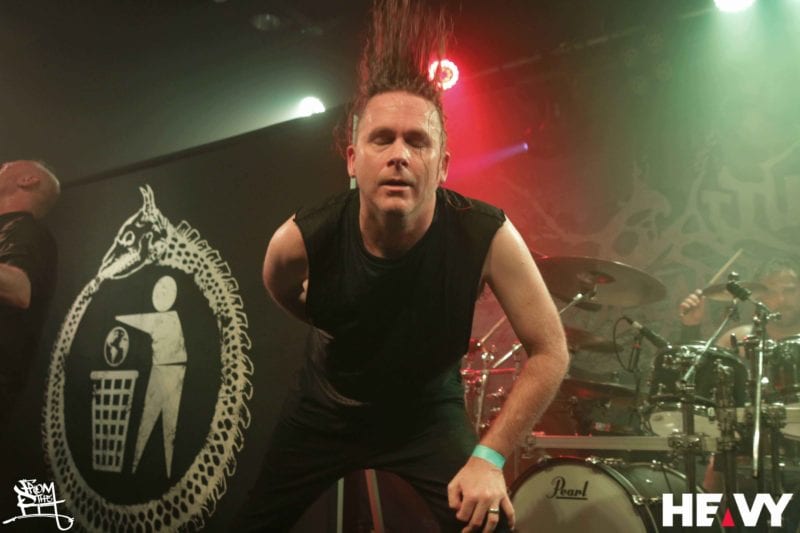 Photos below by Neil Vance and his phone. \m/ 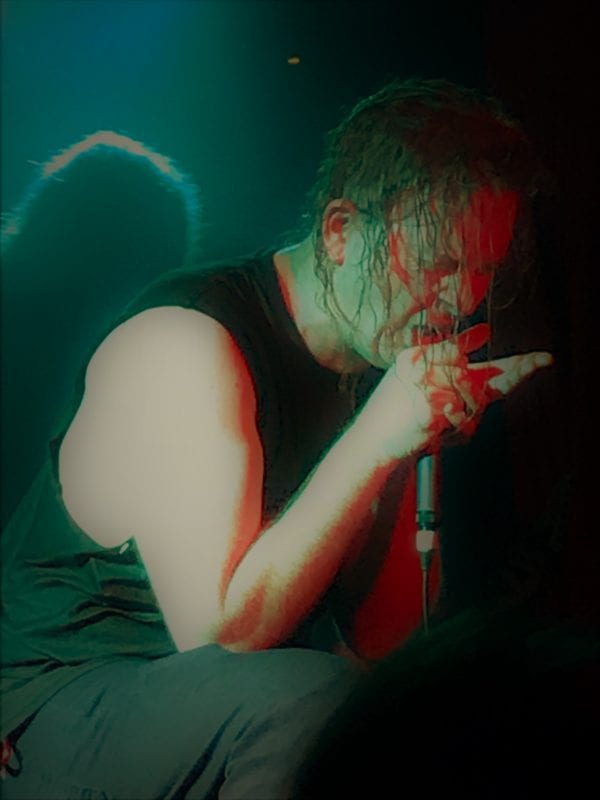 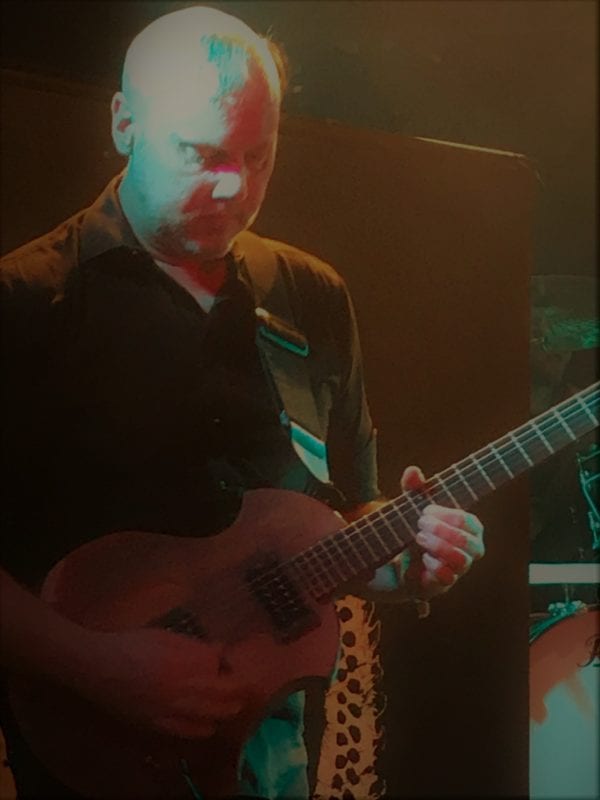 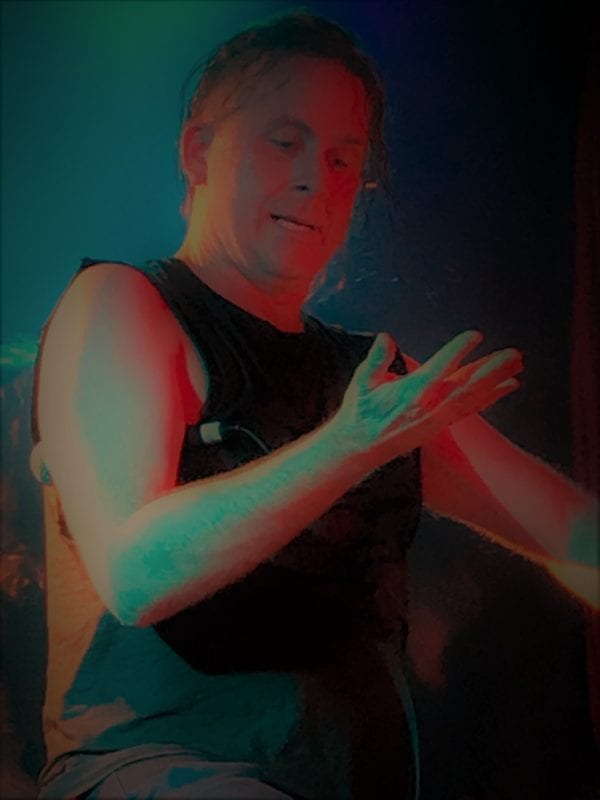