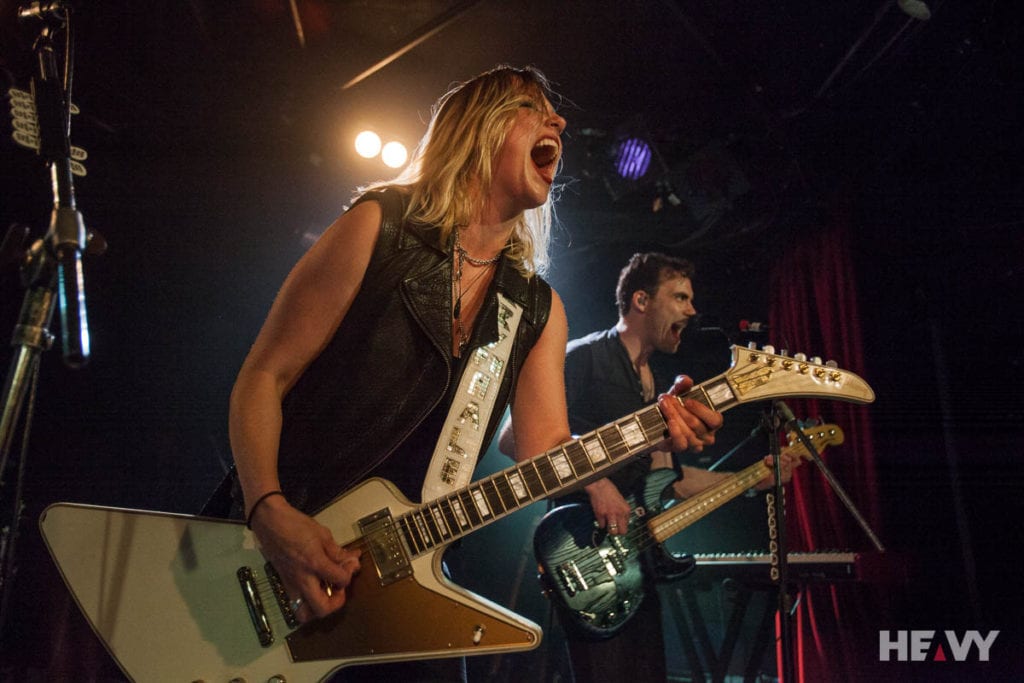 [vc_row][vc_column][vc_column_text]A perfect Tuesday evening in Melbourne and time to kick off the first of three Australian dates for this current New Zealand/Australia co-headline tour (Devilskin headlined the seven New Zealand dates, and Halestorm now take the lead on the Australian leg). The sellout crowd have turned up early and by the time the doors open the queue stretches around the venue and half way down the block. Once inside, the queue for the merch desk is almost as long, plenty of fans eager to stock up.

Just after 8 Devilskin take to the stage, back in Australia for only their second visit and from the start they are clearly determined to leave their mark. The opening track is We Rise, a slice of pure pumping rock taken from their second album Be Like The River. In a strange sort of logic that is possibly very sensible to New Zealanders, the band’s first album is entitled We Rise but this track is released on album number two. Go figure.

By the time we reach the end of song number two, the 2014 single Start A Revolution, the tone has been set. Waves of riffs roll over the crowd and Jenny Skulander’s soaring vocals are simply perfect from start to finish. The set is a solid mix of tracks from both albums and the production is terrific, every member of the band able to clearly heard. Perhaps the most impressive part of Devilskin’s performance is the equal contributions from each member. It would be easy to think that the incredible range, power, passion and tone of Skulander’s vocals would dominate, but in fact all 4 play their roles perfectly. The father/son bass/drums pair of Paul and Nic Martin lay down the foundations of each song flawlessly, and guitarist Nails is carved from pure Hard Rock. Every note and chord he fires off finds the perfect place in each song, never doing too much or too little.

All too quickly Devilskin run out of time and head into their final number, their original single Little Pills. A perfect reminder of how this band can smoothly blend great hard rock riffs and catchy vocal melodies. The trajectory for this band is a constant upward direction and probably the only reason they don’t already own the rock world is the fact they are still based in Middle Earth. It’s just a matter of time though.  With the stage reset after a short break, the house lights dim and the Halestorm set begins. Singer and front woman Lzzy Hale takes the stage alone and kicks things off with God Bless The Beast, singing and playing piano. During the New Zealand dates Halestorm were forced to cancel one show because she was suffering a throat infection. That night off seems to have done the trick because she is amazing from the very beginning. The rest of the band soon joins her and they crash into Apocalyptic, the crowd loving every second.

The set is full of Halestorm classics, and paced perfectly. Early on they deliver Freak Like Me and Amen. After asking the audience if they’d rather be home watching Netflix and eating pizza they rip into Rock Show, followed by a great cover of the Whitesnake hit Still Of The Night. Then Lzzy takes to the keyboard again for Dear Daughter, slowing the pace and showing her versatility once more.

In contrast to the openers, the Halestorm performance is dominated by Lzzy. She’s an unstoppable force and mesmerising presence. Demanding the fans attention and feeding from it, she strides the stage and dares you to ignore her. A rock entertainer in every sense. That’s not taking anything away from the other band members, guitarist Joe Hottinger lays down an endless array of superb lead breaks throughout the night and bassist Josh Smith is so solid. Lzzy’s brother Arejay on drums has his moment to shine midway through I Like It Heavy with a drum solo that starts off pretty traditional but eventually morphs into a kind of crowd karaoke, before he pulls out a pair of seriously oversized drumsticks to finish things off. Lzzy returns to the stage and comments that “he has big drumsticks to compensate for having a very small … cowbell”.