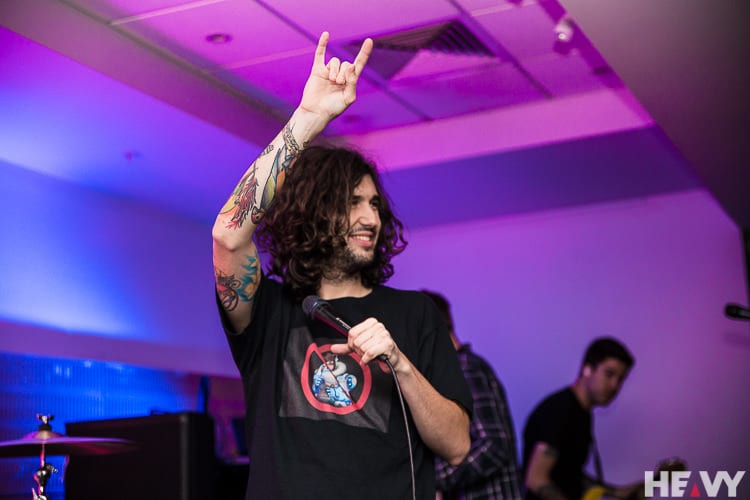 I was 16 years old when I first heard of Real Friends. I remember sitting in my best mates room at about 2 am scrolling through the most recent album/EP releases when we came across the “Put Yourself Back Together” EP. Listening to “I’ve Given Up On You” for the first time was something I’ll never forget, because those lyrics really resonated with me and what I was going through at the time.

Approaching Swanston Street, it was a typical cold winters night in Melbourne. I’d just spent the last hour travelling through the heavy traffic of a Friday afternoon and I was ready for a night of pure pop-punk. At 21 years old my concert going days have already spanned more than half my life but something was different about tonight, this was my first time reviewing a gig. I will admit I was nervous but quite alert to what I was in for and what I needed to pay attention to.

The first band to kick off the night were local Melbourne boys, Stuck Out. These guys bring to the stage a feeling of old school punk-rock, mixed with a cool new pop-punk vibe and they never cease to amaze me. They had the crowd going from the very first note—with a small group suddenly huddling close to the stage—the energy only went up from there. With tracks like “Evergreen” and “Statelines” having a strong impact on the crowd, they ended the night with my personal favourite “Fragments” to which I couldn’t help but jump around and get involved in.

Next up we had another local Melbourne band, Harbours. I remember seeing these guys back at The Corner Hotel playing before I Prevail earlier this year. They’d put on a great show then but tonight was another level. Being in such a small room, with no barriers and a low stage, you could feel how close and intimate they were with the crowd. Harbours played tracks from their 2016 “Nothing Stays The Same” EP including “Take Me Under”, “Your Eyes” and “Pulling Teeth”. But the highlight of the night had to be the title song, “Nothing Stays the Same”. You could feel it hit the crowd on a very deep and emotional level, leaving me in awe of the vocalist Tory Robertson and his ability to put so much passion into such a powerful track. Before their last song, Tory gave quite a moving speech on his depression and really communicated to us all that things will be ok.

We then had the humble boys of Columbus take to the stage and I knew straight away we were in for a killer show. I’d waited a long time to see these guys play and listening to their album “Spring Forever” on repeat all week had me ready for a great set. The 3 piece band from Brisbane started off with their track “Replace Me”, causing the crowd to immediately engulf the stage. This was followed by tracks such as “Daffodil” and “Learn To Swim”, which were sure crowd pleasers. We then got a taste of their newest song “Next To Me” which was a lot of fun, bringing a much lighter and melodic feel to the stage, whilst still being a great sing-a-long track for the crowd. Coming to the end of their set, the final tracks “Say What You Want” and “Raindrops” were bitter sweet, grungy pop-punk vibes. The crowd’s energy, sweat and enthusiasm for these last few tracks were incredible to be a part of.

Finally, we get to the point in the night we’ve all been waiting for. From Tinley Park, Illinois to a tight venue under Swanston Street, Real Friends make their way onto the stage. After a week of shows all around Australia, they were ready to send the tour off with a bang. The moment guitarist Dave Knox opened with “Empty Picture Frames” you could feel the energy of the crowd build up into those first few lyrics. Keeping the spirit alive from their most recent album “The Home Inside My Head”, they went straight into their first single “Colder Quicker”, which kept the crowd singing along to its angsty, upbeat tune. They then took it back to 2012 with their infamous “Floorboards”, a song that really defines this raw, gritty pop-punk sound they have. Vocalist Dan Lambton was really feeding off this energy and being in such a small packed space gave him the ability to connect with the whole crowd. Bassist Kyle Fasel’s enthusiasm and charisma throughout the whole set was also enjoyable to watch, whilst their drummer, Brian Blake, chilled his way through the set with style and ease. I was impressed by how many songs they played off their “Put Yourself Back Together” and “Everyone That Dragged You Here” EP’s, keeping it old school and not just sticking to their most recent albums.

There was a moment where Dan told the crowd to put their phones away for this next one and I could tell he just wanted everyone to be there with him, as the song lead into “I’ve Given Up On You.” It was quite surreal hearing everyone sing this at the top of their lungs, an experience I’ll never forget. Once this was finished Dan spoke of his life and what he’d personally been through, talking words of hope and the importance of speaking out and getting help when you really need it.

To end it off “Mess” left the die hards sweaty and wanting more. This being one of their biggest hits set the crowd up for a powerful ending with their sweet tune, “Summer” closing the night.