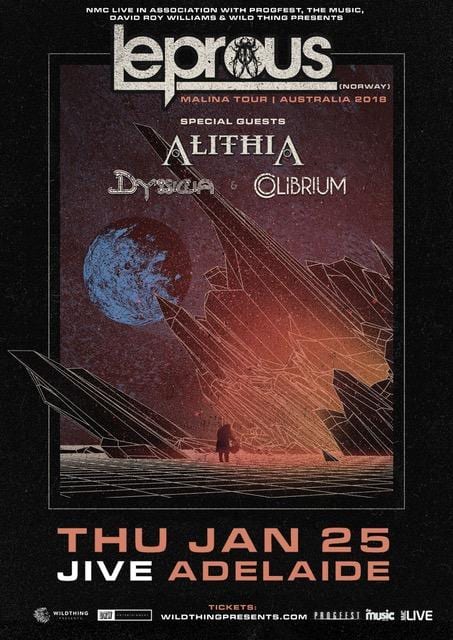 The 2018 line up of Progfest will be the strongest yet with Norway’s LEPROUS confirmed to headline all 3 Progfest festivals, plus headline their own sideshows in Perth and Adelaide!
Some of Australia’s finest acts including: Voyager, AlithiA, Orsome Welles, Meniscus, Osaka Punch and Dyssidia are just some of the 24 bands that will be taking part in Progfest 2018!
The line ups for the Leprous headline shows in Perth and Adelaide are now complete.
Joining Leprous and their special guests Alithia are:
PERTH
Friday, January 19: Badlands
Three piece instrumental progressive rockers Bury The Heard can deliver chest beating anthems, frenzied jazzed out jams and cerebral dissonance without skipping a note.
Recently sharing stages with Caligula’s Horse, Tangled Thoughts Of Leaving and Orsome Welles, their stage show is at a potent all time high!
Progressive creationists Kripke’s Illusion will bring their keyboard flavoured prog meets hard rock to the fore. Van Halen takes on Rush!
ADELAIDE
Thursday, January 25: Jive
Adelaide’s foremost progressive metal act Dyssidia have crafted a unique sound amongst their peers.
Their breathtaking motifs and intricate rhythms have lead to them sharing the stage with the kings of the global progressive scene.
Dyssidia will also be appearing at ALL Progfest events
Colibrium will deliver their unique blend of melodic rock that swings from Zeppelin to Tool and beyond. Their live show has been stated as being ‘unforgettable’
PROGFEST 2018
Saturday, January 20: The Factory Theatre, Sydney
Leprous
Voyager | AlithiA
Meniscus | Orsome Welles | Breaking Orbit
Glass Ocean | James Norbert Ivanyi | Osaka Punch
Dyssidia | Majora | Hemina | Mercury Sky | Genetics
Sunday, January 21: The Triffid, Brisbane
Leprous
Voyager | AlithiA
Osaka Punch | Orsome Welles | Opus Of A Machine
Dyssidia | Kodiak Empire | Balloons Kill Babies | He Danced Ivy
Saturday, January 27: The Corner, Melbourne
Leprous
Voyager | AlithiA
Orsome Welles | Toehider | Meniscus
Branch Arterial | Dyssidia | Acolyte
Enlight | Fierce Mild | Logic Defies Logic
Tickets from wildthingpresents.com
Leprous have come into their own this year, performing to packed crowds on their European tour with Devin Townsend and becoming the ‘must see’ act of the Euro summer season. The band released their new album Malina in August this year to critical global praise and have crafted songs that are both catchy and progressive.Featuring sophisticated and intricate textures that are woven around sublime harmonies and rolling post rock rhythms.
Progfest 2018 has expanded to include all three east coast capital cities, hitting Sydney and Brisbane along with returning to Melbourne, following its December 2016 sold out edition!
Featuring progressive bands of all styles and genres, from prog, post, psychedelic, art rock, metal and everything in between, PROGFEST is about showcasing bands that think for themselves;
bands who rather than following the latest trends, have decided to challenge themselves musically and create music with depth and vision.
Beginning life in 2008, Progfest has grown along side Australia’s love of progressive music, and has become the centrepiece of the nation’s burgeoning prog scene.
In the intervening years, the progressive scene in Australia has exploded and the bands associated with it are now a global force to be reckoned with.
Many of the acts have gained huge followings from all over the world. Ne Obliviscaris, Caligula’s Horse, sleepmakeswaves and Twelve Foot Ninja
have all headlined Progfest in the past, and each of them have gone on to crack the ARIA Mainstream chart and have global success.
facebook.com/Progfest