When two already near beautifully brutal entities are suddenly smashed together into an avocado like substance on a gluten-free sourdough sliced cobb loaf, in a trendy St. Kilda breakfast tavern, we hope for the best… It’ll either be Dead Set fuckin’ delicious and you’ll tell all your mates about your new “trendy” find, or it could be not great and you tell your mates anyway… Following your advice, they venture to said breakfast tavern and they Bite Your Head off ‘cos it was shit!

The above-smashed avo in a brekky tavern reference above comes form of the absolute tasty brilliance from the powerhouse and world renown King Parrot and their death-grindy brilliance that is a full-length number three, UGLY PRODUCE.

What is Ugly Produce like then? I hear the community ask. Ten songs equating to twenty-seven minutes of the most blistering and perfect King Parrot brutality delivered as promised.

Recorded and mixed by the gentle, sexy hands and ears of Mr. Jason Fuller at his Goatsound studios he has seriously refined his recording art magnificently and Ugly Produce is a credit to a man who will be now further noticed and revered because of this release.

I reckon there was a bit of pressure on the band, considering their previous releases of excellence to deliver something beyond great. This is because of their ability to throw caution to the wind, focus on nurturing and building their art as a whole package. That King Parrot faith in throwing caution to the wind ethos, saying “fuck it” and touring the world and vast country pubs in Australia; creating music videos that are funny, absurd and somewhat relevant (sort of) and well thought out.

Not gonna call out the obvious but I will call out the first clip “Ten Pounds of Shit in a Five Pound Bag”. This song was that breath from King Parrot we needed. I mean, what a song. And the film clip is pure KP gold. Every person I spoke to that had seen the clip and heard the song loved it without question. And they all harked the same sentiment, this song alone was like “Bite Your Head Off” and “Dead Set” had spawned a beautifully ugly baby.

Then Bad Produce brings us, “Disgrace Yourself” and “Die Before You Die” as semi-singles for radio play, which we would have thought were a pretty fine indication of what was going to be heard on Ugly Produce overall, but Yeah Nah! The seven other tracks are so far beyond awesome and heavy I am almost speechless to define with any real clarity. The rest of Ugly Produce remains genuinely and uncompromisingly King Parrot. The band have created and defined a character and sound that is easily theirs and theirs alone.

Whilst you would think the length of the album doesn’t do the songs and the band any favours, on the contrary, the longest song on Ugly Produce is “Spookin’ the Animals” and it clocks in two seconds shy of four minutes.

Ari, Squizzy, Slatts and Todd and Youngy have perfected the art of not flogging a dead horse and are all about get in quick, smash the audience around the face and then they get out before we know what hit them. And there is no need to romance King Parrot fans–we want it hard, fast, ugly and with apologies.

So here’s a little glimpse into some of the songs contained therein: ‘All Hail the Grub’ – Is a groove-laden beer throwing, body pummeling salute to Aussie punk rock pub grind brilliance. A true and correct summation of quote The Stench of Pub Thrash

“Scattered” is a two and a half minute continual Bruce Lee type one inch punch to the body and we’ve just stepped over the halfway mark and the journey gets no less powerful.

Next up is track seven and is easily the standout IMHO. “Now it Stokes Frenzy” is all things I want my metal to be. Brutal in every way, unrelenting, unapologetic, and just sheer straight up anger and brutality. It is also the song where Youngy just lets his voice go and delivers to the listening audience, what I think is some of his finest vocal delivery yet.

“Numb Skull” kicks us straight up in the teeth from the get-go and then in no time at all we are gifted with a groove so killer and golden that I am sure will create a pit at live shows so chaotic and havoc-driven it will surely be a crowd pleaser. The three-quarter mark breakdown dragging and kicking us to the end is magic too by the way.

KING PARROT are back without apologies and ugly as shit–just how ya want them.

UGLY PRODUCE is out worldwide on 22nd September in Aus through EVP/ROCKET, UK/EU through AGONIA and North America through Housecore Records.

GET SMASHED BY THEM LIVE 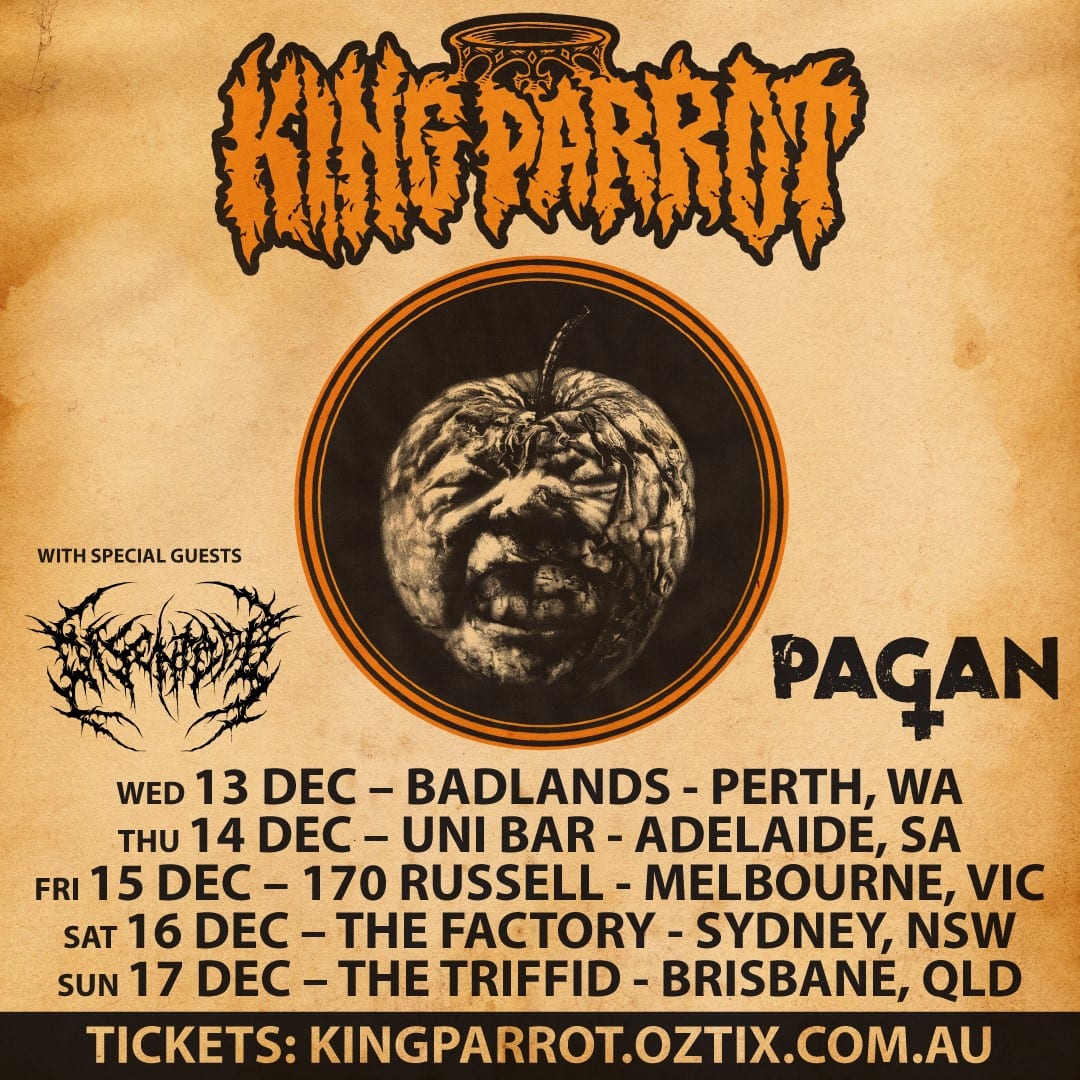 PrevPrevious.WORLD WAR ME ‘World War Me’
Next.DREAM THEATER at Hordern Pavilion, Sydney 19/9/17Next