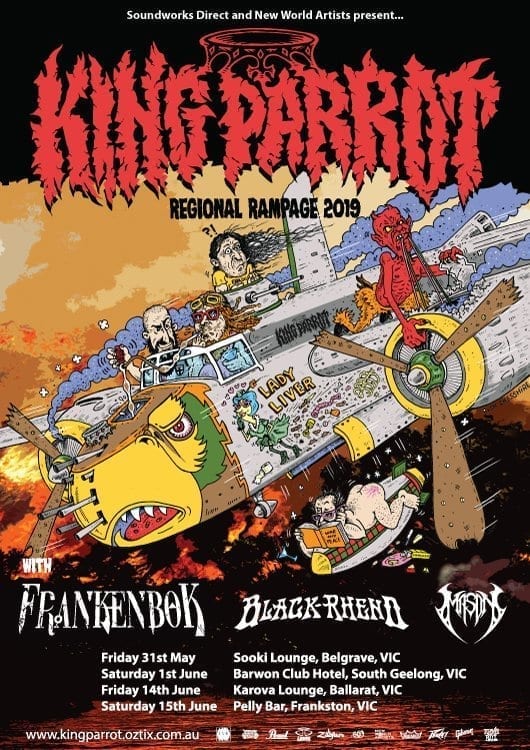 Another killer night in ol’ G’town for gig number two at the BC for this years very short four date run for what has seemingly become King Parrot’s annual Regional Rampage tour and once again the passionate heavy metal hordes braved the nut shrivelling weather and post AFL match Cats fans to be kept warm by the fireside of four diverse and and punishing bands.

Kicking off the evening were thrash metal titans out of Melbourne Mason. Having spent years honing their craft, song writing mastery live performance and just all round technical brilliance, Mason have encapsulated and perfected the roots and sound of all that personifies the traditional thrash metal sound of the late eighties and early nineties. In an age where Testament’s – The Ritual, Megadeth’s – Peace Sells, Metallica’s – …And Justice, or Slayer’s – South Of Heaven we’re rewriting the book of a genre and defining it’s progression moving ever forward that era has clearly left an indelible identifying mark and brand on Mason and harnessing all that they represent their live performance left the few of us present to witness them last night breathless. Watching these four blokes deliver an unbelievably crushing half hour set of pure unadulterated old school thrash was an uncompromising assault on the senses. The only thing that would’ve made Mason truly authentic was the addition of bullet belts and a backdrop covered in tanks and explosions. Frontman Jimmy’s grasp of the audience plus his stellar vocal delivery and guitar attack was a close to awesome as you can get, build on that with the sheer incredible guitar mastery of Grant Burns who was just a pleasure and awe inspiring figure to watch and hear topped off with the punishing thrash blast beats courtesy of Nonda and bottom end of Steve, collectively Mason truly prepared the audience for the onslaught that would continue for the rest of the evening.

Second band to grace the homely and sticky Barwon Club stage were Sydney’s Black Rheno. This was my first date with this genre destroying three piece. Part doom, part grind, part sludge, part punk, part groove, overall making them wholly fucking extreme and heavy this was a performance I was not expecting. Black Rheno have melded all the best bits of all the best metal and given it a loving sound and home within their genetic makeup and created music that defies logic but delivers an incredible artistic gift. Sans bass player, it is upon the shoulders of guitarist Nano to form, build and maintain the sonic foundations of Black Rheno and he does that exactly and then some. A behemoth of a force on stage Nano’s command of the musical structure that Black Rheno represents is truly something to hear and witness. More than just merely going through the motions of the dull and dreary verse / chorus / verse / chorus / end style and approach to songwriting, Nano has harnessed this innate ability to create something new and enriching to metal whilst capturing the anarchic and armageddon like feel and awareness to what represents all facets of extreme music. Complimenting Nano is Doug on drums whose duty it is to force the crowd to confront the ever changing forward movement and dictate how the crowd should move and behave.

That leaves the task of conductor and leader to vocally enforce the spiteful nature and intellect of what truly defines Black Rheno to frontman Milla who parades around and pummels the stage and identity of the crowd present like an escaped lunatic whose sole intention is to wreak havoc all the while vocalising the word of Black Rheno. Given all that Black Rheno encapsulate this must be a hard task by any stretch of the imagination, but it is by their own hand that Black Rheno have spawned themselves from the ashes of the extreme and heavy elite before them and what they are is a diverse, immersive, eclectic band that have crafted a style and sound they can only call their own, to the same extent that Nails have done also.

The ‘bok are BACK! It’s hard to imagine sometimes, knowing all of the shit that this band has been through, that day after day, weekend after weekend, tour after tour, that they will just dust themselves off and get on with the job at hand. Band members have come and gone and too many to mention, ego’s and petty bickering were all but an obstacle on the path towards either greatness or extinction but most importantly that burning Frankenbok desire to represent the absolute gospel truth of live and breathe the rock n’ roll ethos no matter the cost. The trials and  tribulations that have presented themselves to Frankenbok over the past few years could have done either of two things, left them with a bitter taste in their mouths and allowed them to rot and fester in a graveyard of has beens or rise amongst the turmoil of hard rock greatness, grab the proverbial bull by the horns and soldier on and prove to not only themselves but their fans that the ‘Bok are an unkillable machine that take everything in their stride and instead of laying down and fading into obscurity, harnessed their previous droll and meaningless issues and allowed it to strengthen their testicular resolve and risen like few other bands can do. The reintroduction of Dan McDougall as frontman for Frankenbok has done nothing but recharged the band back to full throttle ball kickers and Dan looks and sounds more threatening and passionate than I think he has been in a long long time. Whilst collectively Azza, Dan, Reiki, Tom are the foundations of all things great and strong in hard and heavy rock, it’s McDougall that is the mortar that binds and fortifies Frankenbok as a solid unified live brotherhood. The sounds of sweat and blood and beer that emanates from both the stage and the front of house speakers tell a sonic and visual story that was forged through the ages and came to a head tonight in Geelong for us to witness a truly great and beautifully brutal set from the mighty warriors of Aussie hard rock that is Frankenbok.

Besides Youngy, Slatts, Ari, Squizz and Todd, who are King Parrot? Are they grind, are they death, are they thrash, are they just metal? Genre defying and skull crushing, regardless of however it is we want to categorise King Parrot it can justifiably be said that they are five wholesome and extremely pissed off blokes from Melbourne, that if nothing else want nothing more than to spit their rage inducing desires towards all those who’ll listen whether it be voluntarily or not. Every show is uncompromising, unsettling, fun, chaotic, punishing but most of all unapologetic both to and on every available sense and orifice present at their gigs. There is no brakes on when King Parrot play live. It is a full on, throttle through the floor force that demands every person present leave their humanity and will to exist at the door and pray to be both entertained and pummeled to within an inch of your existence courtesy of King Parrot’s destructive musical force.

With a catalogue now consisting of three fine albums, the KP set is a damn raw and killer show which consists of the best King Parrot have to offer. Youngy spits and wails in the faces of both the suspecting and unsuspecting delivering a psychotically unsettling performance as always, Slatts was on point with his in between song banter and bass punishing showmanship. Little can be said as to the brilliance and comradery and dual shared guitars of both Ari and Squizz and their ability to connect and destroy eardrums for their performance then to top it off Todd’s pummeling drum mastery brings everything that collectively King Parrot do.

Tonight’s events known as Regional Rampage as a whole was exactly as it describes, a rampage of the highest order that left the punters covered in sweat, beer and appreciation of four of this country’s finest, honest and raw destructive bands and left us attendees grateful to have been a part of regional heavy metal armageddon.