Ten years is a hell of a long time to be in a band, let alone being in the gargantuan touring wrecking machine that is King Parrot.

Broken teeth, skinned knees, black eyes and empty cans are all in a day’s work for the boys in KP!

And ten years of surviving this beastly ride is more than reason enough to hit the road and celebrate it with their hordes of fans all around Australia. Now that restrictions have eased and there’s been a “dipping of the toes” back into the live foray, King Parrot are excited to get back out onto the live circuit to celebrate their 10-year anniversary.

After the release of their Holed Up In The Lair EP last year, it’s been odd that KP hasn’t had the chance to support the release through their usual rambunctious and off-kilter live performances… That’s all about to change.

With a sense of urgency among the camp and a renewed vigour, King Parrot will once again grace the stages of this great nation to deliver their revered visceral performance to the masses. If you’d thought a King Parrot show was wild in the past, then strap yourself in and get ready for the country’s most engaging and furious live act as the energy in the KP camp is beyond tipping point. The guys are simply chomping at the bit to get out and unleash their unique grinding frashing punk rock wrecking machine around the country as they hit stages from July right through to December. These will definitely be some of the most packed out and crazy shows you will see in Australia this year and will no doubt be ones for the ages! 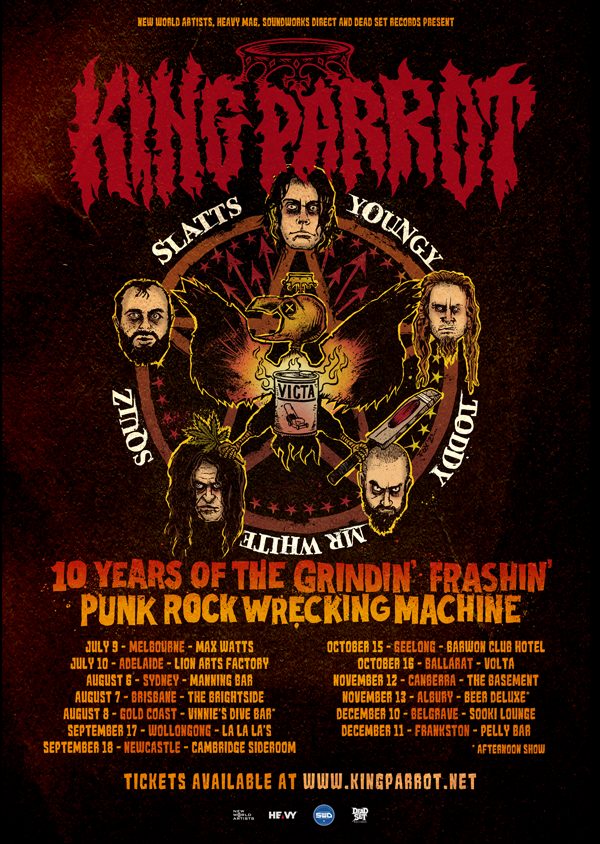