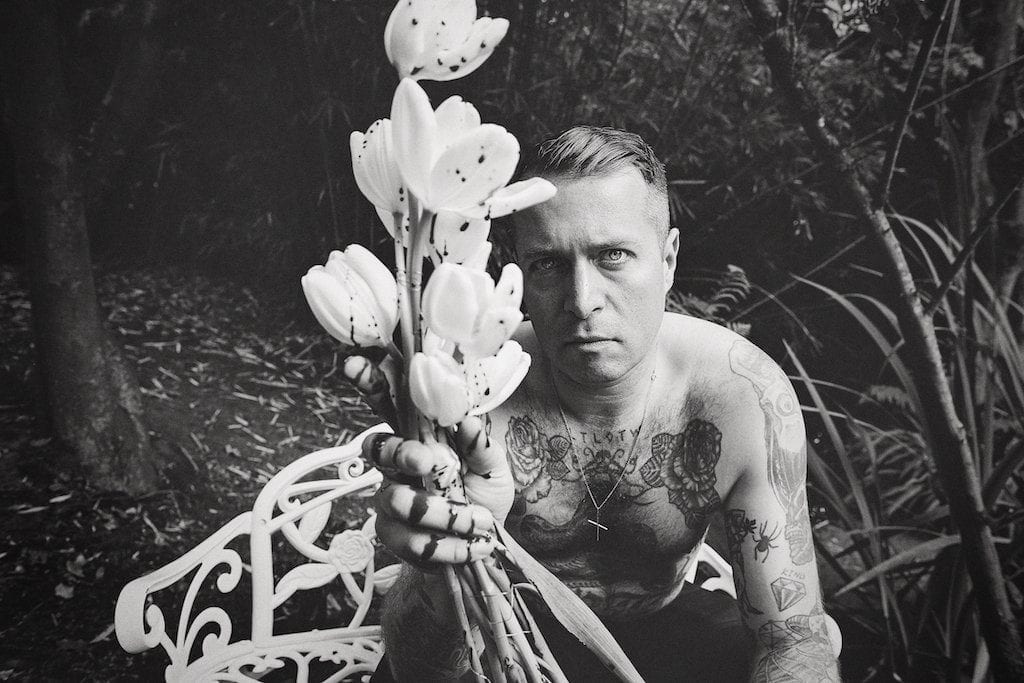 Beware Australia something dark and sinister is coming. For almost a decade now singer/songwriter TJ Cowgill has been performing under the name King Dude. His Luciferian folk epics have been wowing audiences right around the world and now on the back of the release of his seventh album, Music To Make War To, he is coming to Australia for a series of gigs.

“I’m never really sure what to expect myself,” says King Dude when I ask what Australian fans can expect from his shows. “The shows are quite spontaneous I would say. Often I don’t follow a setlist. I like to talk a lot too between songs sometimes and I’ve seen that both delight and infuriate crowds. I would hope though that everyone will leave the venues feeling better than when they walked in.”

The other aspect of watching these shows is getting to see King Dude play music that has been described as ambitious instrumentation live. “It is fair to medium difficult. Definitely not expert level,” he says when we begin to talk about how difficult it is to perform those tracks live. “My live band played on this album for about half of the tracks so those songs are a snap. No problems. But some of the more ‘electronic’ songs are kind of tricky to recreate but still we do play them live and love them. It works actually quite well in my opinion.”

The talk of the instrumentation leads to me asking about the various genres of music that he has created over the years. “Yeah I love all kinds of music from all eras. I tend to want to lean towards a more classic sound and nothing too modern although you might here some trip-hop inspired parts on In The Garden. I like things that feel timeless and that’s the sort of sounds I seek. I’m not trying to break the world with new sounds. I still feel that there’s plenty of space to explore with the more traditional rock n roll instruments.”

Of course all of that music loving comes to the fore on Music To Make War To… an album that the man himself is obviously very happy with. “At first I thought it was just a clever little play on those classic albums from the sixties, you know like Music to Make Love to or something like that,” he explains as we talk about where the idea for the album came from. “But as I started to work on it from a more serious perspective the subject of war really grew on me. I read a lot about WW2 and watched a lot of documentaries on that war in particular. I wanted to make it more allegorical than literal so a lot of the war metaphors aren’t exactly about that war or any war for that matter. The album is truly about conflict. It was fun to study it but to be honest I’m glad to be out of that headspace. It was over a year or so that I was researching before I even really started writing it.”

One of the standouts on the album is of course the duet with Josephine Olivia which it turns out was originally going to be a very different song. “Originally when I wrote it and we recorded it in the studio it wasn’t going to be a duet,” he explains. “But then I realized that it would be much better as one so I phoned Josie to see if she would want to sing on it. I met her at a show we played together in Baltimore back in 2016 and was blown away by her voice. Afterwards she offered to sing on a track if I ever needed it and it only took me 2 years to ask her ha ha! But it worked out great. We tracked in Brooklyn while I was mixing there with Randall Dunn. He loved her voice so much he asked her to sing back ups on a couple other songs on the record which all turned out great. Josie has a great work ethic, she’s so driven to make music. It’s in her blood and it shows.”

The album has also seen King Dude get more creative with his video clips and he said the past trilogy of clips have been a lot of hard work. “It was crazy how it all came together. I realized I had all this time in Europe this summer without too much planned other than some shows here and there so I asked around for directors in Berlin and Kiev and that’s basically how I found everyone. It all came together so fast like in a matter of two weeks from the idea to make videos to then actually shooting them. It was so fast. I wanted to give all the directors full creative control to see what that would feel like. I’m normally a bit of a control freak so that was bit strange but I really tried to roll with it. To see if I could do it. Of course they had some ideas that I had to say no to, but I really tried to let them have their vision of me come to life in the way that they saw it. Each video represented its own challenges and I absolutely admire and respect the amount of talent everyone put into making them.”

There will also be no rest for the wicked after King Dude’s Aussie shows. “I set out on full US tour starting April 23rd and then from there we go to Europe for another few weeks,” he says. “Basically I will be on the road for the next three months! Then expect even more touring in the fall. Idle hands are the Devil’s hands after all!”

All the details about King Dude’s shows can be found below.