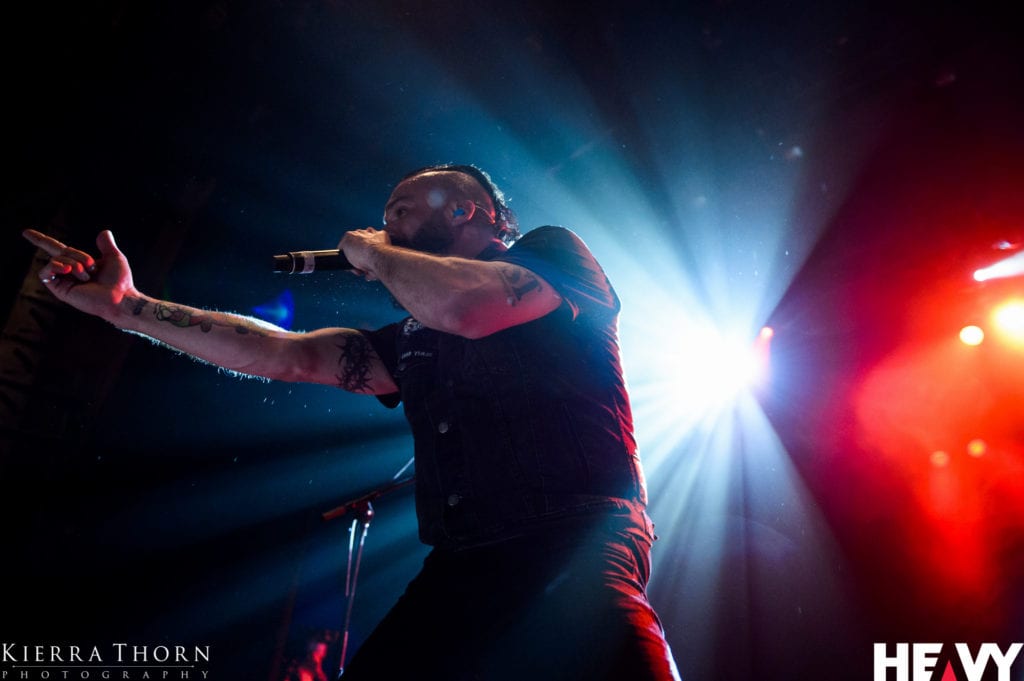 Fifteen years ago, Killswitch Engage altered the course of heavy music with the release of their landmark debut album Alive Or Just Breathing, paving the way for the metalcore movement. With the release of their seventh studio album, Incarnate in 2016, they continue to dominate the genre, and tonight was a celebration of that moment when the band burst into our lives, and carved their name into our cochleae.

There was a healthy turn out for the opening act, Perth five piece Cursed Earth. While their musical style doesn’t venture too far from traditional hardcore, having a female singer gives them a different edge, and front-woman Jazmine Luder’s aggressive vocals and violent moves makes for a high energy live show. They played songs from their 2016 album Enslaved By The Insignificant, with highlights being Voyeurism and Enslaved.

While many people may associate the Bay Area with thrash metal, the hardcore scene has also given us some great bands over the years, and San Francisco’s Fallujah have been melting faces for a decade. This is their first time to our shores, and judging by the number of punters now crammed into the Enmore, I wasn’t the only one keen to check them out. They played tracks from all three of their releases, Dreamless (2016), The Flesh Prevails (2014), and The Harvest Wombs (2011). Highlights were Cerebral Hybridization, Sapphire, and The Void Alone, which had some enthusiastic audience participation. The things that really stood out were their technical aspect, in particular drummer Andrew Baird, who put on a clinical display of power and precision. The other was Alex Hofmann’s vocals. Those guttural growls could strip paint off walls, and his scream at the end of set closer Scar Queen was blood-curdling.

As the roadies began to wrap up the set change, the crowd began to chant “Kill-Switch”, “Kill-Switch”, and when Jesse Leach ran onto the stage and screamed “THE TIME APPROACHES”, the place went nuclear.

As advertised, the band played Alive Or Just Breathing in its entirety, and every single song got a rabid response from the fans. Hard to really pick out highlights, but tracks such as Fixation On The Darkness, Last Serenade, Life To Lifeless and Just Barely Breathing had everyone in the venue screaming, fist-pumping, headbanging and moshing. I’d be hard-pressed to recall a more tumultuous crowd….and it was awesome.

They also played some of the newer material, such as Hate By Design and Alone I Stand from Incarnate, and Jesse dedicated My Curse from 2006’s As Daylight Dies to all the ladies in the house. Guitarist Adam Dutkiewicz gave us some “unconventional” suggestions on how to deal with anxiety and depression, which led into Strength Of The Mind, and then got the whole joint screaming again with The End Of Heartache, which was just mind blowing. The house lights came on briefly, but the boys weren’t done, coming back for one encore, Rose Of Sharyn, which was the perfect way to end and amazing show.

Its nights like this that make you realise that this is how metal is supposed to be heard….live and loud, pummelling your eardrums, and sending a rush through your body that is hard to describe, and impossible to replicate. Adam pointed out to the fans that they love coming to Australia, and I, for one, can’t wait to do it all over again.