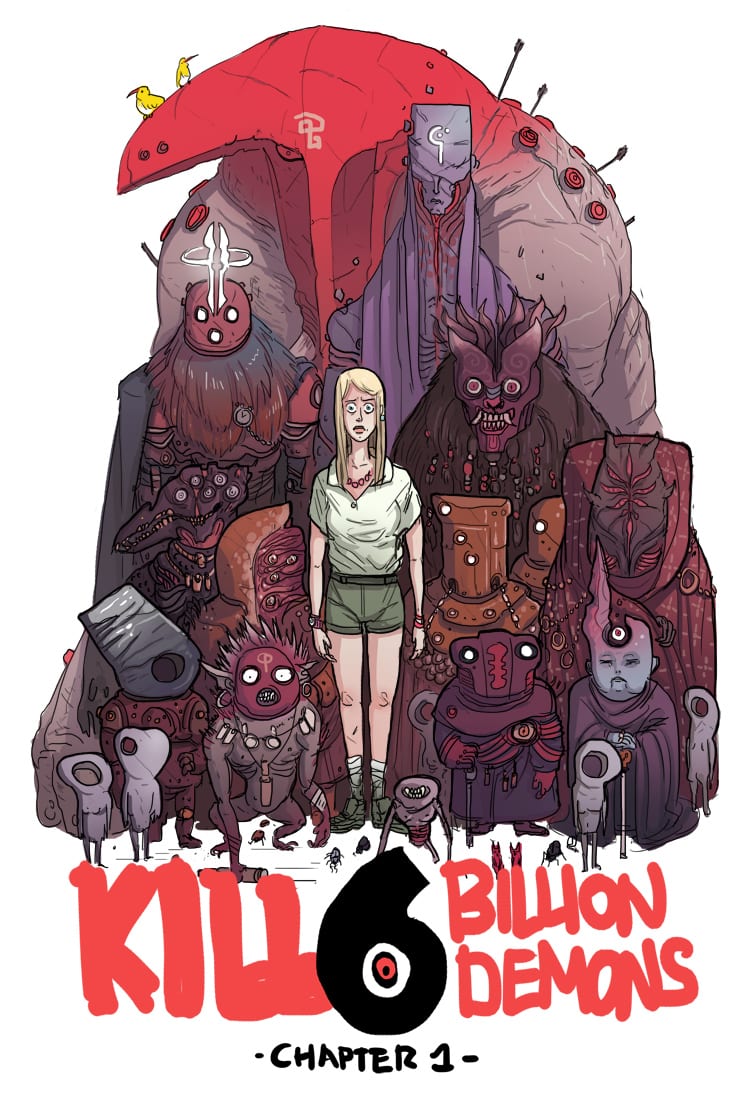 Today, I’ll be taking a step back from video-games and their music and honing in on another entirely soundless medium. I’m talking about the world of webcomics, where visuals are king and stories are told through over-the-top action. In particular, I’ll be looking closely at a unique little gem drawn by the artist known only as Abaddon. It is a webcomic where every panel looks like a metal album cover, brimming with high-octane, out-of-this-world thrills.

This is Kill Six Billion Demons.

Don’t wear it out.

KSBD kicks off when the king of the multiverse barges into a teenage girl’s bedroom, pursued by thorned angel-knights upon the backs of hellish skull-steeds. He is beheaded by the knights but manages to plant the key to all creation inside our protagonist Allison’s head. She is whisked to a monstrous otherworld where everything wants to kill her, full of Kung-Fu angels, towering masked demons, and the beggar dead.

I asked Abaddon about the inspiration for his world, which is a mishmash of just about every conceivable culture, creed, and monstrosity.

“KSBD is like an enormous stew of all the things I like to watch and read, but I think if I had to name some prominent influences it would be the art of Wayne Barlowe and the comics of Jean Giraud aka Moebius. These two guys, Moebius especially, have such a phenomenal and enormous talent at creating huge, alien, immersive worlds with an insanely impressive level of attention, detail and aesthetic. I would consider Moebius one of the greatest comic artists of all time, and I think I lie within his ‘school’ of influence with many other artists.”

An “insanely impressive level of attention, detail, and aesthetic” is exactly what KSBD offers. The world of Throne lives and breathes – even if what it lives is violence and what it breathes is poison. Abaddon has a real talent for drawing huge, beautiful vistas and cityscapes that, even without context, function as captivating works of art. The only comparison I could draw was to Star Wars’ alien landscapes.

“I really like enormous, cavernous spaces; and religious spaces, like Buddhist temples or Christian cathedrals, that have a certain kind of aesthetic or feeling about them. I like lonely places with lots of greenery. I love super busy street scenes; I love the artificial, hyper-commercial, dirty world of big cities. I like advertising, which is kind of horrifying in its power to control and use images. I think so much of KSBD’s city design is me wandering around Fukuoka and Osaka and Nagasaki and just goggling at everything. Really, I think I like stuff that gives me a strong visual impression or feeling: whatever that impression or feeling is. Recently, for example, I’ve been in Europe, and I love the greenery there – the English hedgerows and whatnot – so I’m sure that will show up at some point. It’s funny you mention Star Wars because I love the design in the original movies. I like some of the Star Wars posters that Noriyashi Ohrai did (you can find these pretty easily).”

Besides being a vicious thrill-ride full of the most insane violence put to paper, KSBD has another layer of social commentary. Allison’s journey is a reverse-damsel tale: she must rescue her boyfriend whom Throne’s denizens believe is the chosen one. I asked whether Abaddon set out to write social commentary, or if the commentary is a natural by-product of good storytelling?

“I actually believe strongly in the latter,” Abaddon begins. “I think an author’s beliefs and viewpoint and ideology are fundamentally inseparable from their creation process (even if the end-product is a separate work) – and should be – but there’s this thing I see a lot of authors doing, which is to try and insert social commentary in a story that doesn’t fundamentally support it. The end result can be well-intentioned but very shallow and even offensive to the kind of ideas it’s trying to support. On the damsel story, in particular, I think the whole of KSBD is my sort of love-letter/response to the very tired yet somehow enduring ‘Farm Boy With Magic Sword Kills the Dark Lord’ story I see everywhere in fantasy.’

With all of KSBD’s mayhem, and its thousands of diverse (and uniquely savage) characters and set-pieces, I had to ask: did Abaddon plan every aspect of his world beforehand or does he make it up as he goes along?

“There’s an anecdote attributed to Tolkien that people always wanted to know just what-the-hell was going on in the Misty Mountains, who lived there, etc. (in The Hobbit, of course). And Tolkien’s response was that he didn’t actually know, and probably shouldn’t know. All stories need mountains, in a sense. They are very distant, imposing, and cool, but we don’t actually need to know anything about them. Mr Jean Giraud had a theory about this: that leaving big blank spots on the map gives your readers more space to insert their own ideas and feelings into it; to write their own story, so to speak. I thoroughly agree with both these takes, and that’s sort of my world-building philosophy. No part of a world should ever exist if it does not serve the story, even if that service is as small as creating a kind of mood or aesthetic or feeling. A lot of people start with a world and try and write a story in it; I argue you should do exactly the opposite. A lot of good science fiction (or speculative fiction) writes along a question such as, ‘What if people could travel through space?’ and then tries to answer it. The world building comes afterwards as a natural result of that. There don’t need to be space ship’s in your science fiction story, or swords in your fantasy story at all unless they belong there.”

As a writer, this struck a chord with me. Even Stephen King doesn’t plan out his stories beforehand – he writes situationally: ‘What would happen in these circumstances?’ In my personal opinion, the best storytelling flows from this loose, flexible approach to writing or storyboarding. The problem lies in restraining the creative mind. As Abaddon said, “No part of a world should exist if it doesn’t serve the story.”

In this case, was there any cancelled concepts for KSBD?

“Comics have very limited real estate in which to get a story told, so in my opinion, the entire business of comics is getting a story told in as little space as well as possible. I’ve cut a lot of pages, some of which I still have roughs for (actual roughed out comic pages). I ended up cutting lots of stuff that was just extraneous and didn’t service the plot. There was actually a forum adventure (like a series of images with a text post) on the MS Paint Adventures forum way back when that was a prototype for KSBD that was very, very different in both concept and character. It’s been lost now sadly (it was significantly more focused on boobies, so you aren’t missing too much).”

Ending on a lighter note, I asked Abaddon which character he enjoys drawing the most:

“My favourite character to draw is probably Cio because she is the most fashionable. My least favourite is probably Allison in the current arc because I hate the dumb haircut/jacket combo I gave her. I’m fixing this next book.”