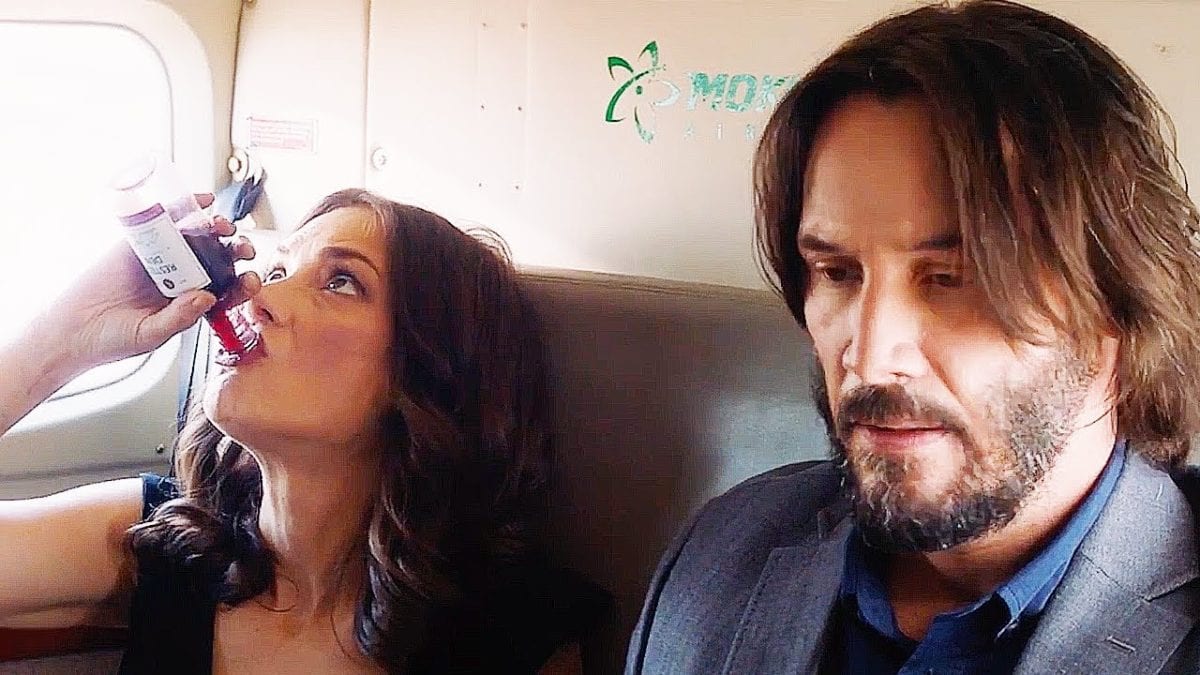 Keanu Reeves has come back in a big way over the past few years in his box office smashing role of John Wick, but now fans of Reeves are going to see him in a whole different light as he teams up with Winona Ryder (Alien: Resurrection, Edward Scissorhands) in the brand new comedy Destination Wedding.

The pair play Frank and Lyndsey two miserable and unpleasant wedding guests who somehow suddenly take an interest in each other. While discussing the film, Ryder says part of the attraction to the role was getting to work with Reeves. “I have so much love and respect for him,” she says. “It really genuinely makes going to work and working an absolute pleasure, and even it is one thousand degrees, and we are rolling down a hill it still gets to that point where I couldn’t imagine doing it with anybody else but him.”

It is something that Reeves says he also feels and after being visually taken back by Ryder’s praise adds “Yeah, I mean we like each other personally and then professionally we have such a short-hand because we have gone up against it and gone through the process many times. We are both cuts from the same acting tradition, cloth, ilk, so we review rehearsals the same, our characters the same, so we end up doing the scenes the same way.”

“That is right,” interrupts Ryder. “And we were working before there were Wikipedia and computers… we’re old school.”

Reeves laughs. “We’re analogue… we’re old. We’re vaudeville. But we are talking about human issues and respect so I would say shorthand respect and affection.”

“I have been so lucky in the past getting to work with so many great actors,” continues Ryder, “But there has been something very, very special about Keanu. ” There is a trust there, and I feel like I am protected and safe but not like we are playing it safe because he constantly surprises me but to know that somebody has your back that is something very rare.”

When talk turns to the characters in Destination Wedding Ryder is quick to describe her character. “I do think she is sort of in a way a little bit of a broken person,” she says explaining Lyndsey in detail. “I think she has been very sort of hurt in love and I think that created a real fear of intimacy but also a deep desire for it at the same time.”

The person bringing Ryder and Reeves together is director/screenwriter Victor Levin, a seasoned professional who has worked on hit television shows like Mad Men and Mad About You. He says that his inspiration for the film came from grumpy people. “I love grumpy people,” he says. “They make me laugh; they make me think and if you ask them enough questions you normally find out that there are enough reasons for them to be grumpy, so that is where I started. Two grumpy characters, grumpiness as a life plan is not a good one because over the long haul it will let you down, so I thought where is the best place to put two extremely grumpy people and watch them thrash about for a weekend… and the answer was a destination wedding. In the end, they have to confront the questions of ‘am I going to stay grumpy or is there any chance for me at all?’ These two characters are set off in their world, unable to participate in happiness and unable to participate in activities in life, certainly in any of the wedding activities, they don’t want to have anything to do with it, they are allergic to it, they want to be over here while life is going on over there. So it was natural to shoot the film like they are cut off, so they are in their hermitic world where they can crack wise and at the same time get to know each other which is the key to the whole thing.”

Levin says he also feels that audiences will be able to relate to both characters as well. “I hope that audiences can connect with these characters for one simple reason – no one goes through life without some trouble. Nobody. Nobody I know, everybody is disappointed, everybody is hurt, everybody is injured by something, very often something of their own making and I think the relevant question is how do we bounce back? It is the same for all ages and all kinds of different people.”

Destination Wedding is out in the US now and will be released in other territories later this year.