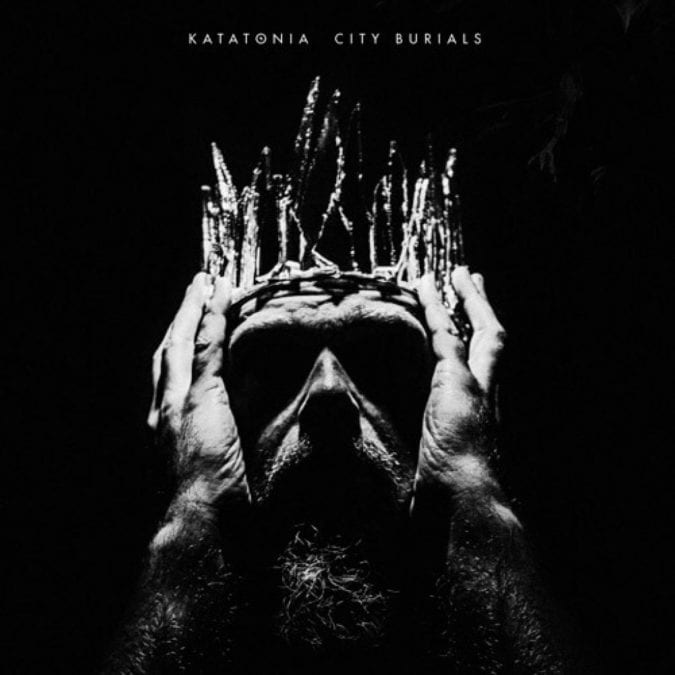 I have started writing this review for the new KATATONIA album, City Burials, and a bare three minutes into the first track “Heart Set To Divide”, I am already hypnotised and in love with what I have already heard and excited about what beautiful solemn doom-prog will be in front of me for the next fifty-three minutes.

What could be more perfect than a dimly lit study, incense and a fine red; headphones fastened as the tuned-hums emanate from the chillingly enticing voice of Jonas Renkse.  He’s serenading my soul, “In times of surrender I am shedding my scars; I was sick, but I was set for the stars. The robe wasn’t mine, but I wore it still; in the sunset of age on the weight of my limbs.”

Typical Renkse — a heartfelt belonging, in need and belonging with a sense of wanting to push away. Few men do to me what Jonas does with a masculine siren song.

Along with the other original founding member of  Katatonia, Anders Nyström [guitar], the two men have an innate ability to reach into the spirits of their listeners and with a bleak view on our existence but yet make it mean something.

It would have been criminal for Katatonia to open the album any other way than they have with “Heart Set To Divide”. It’s a quiet two-minute lullaby before the more typical grandiose, prog, and heavy style that you will recognise instantly as Katatonia’s signature.

What is immediately evident even this early on in the album is that they have become a good deal heavier on City Burials, including an instantly recognisable differing guitar style courtesy of the inclusion of new guitarist Roger Öjersson. With each changing style on this just the opening track, my heart and senses are quickening with anticipation of the rest of City Burials.

Track two is the second clip released titled “Behind The Blood”, a crunchy, driving, hypnotic and rhythmic piece with a clearly elusive tale told of love lost but the passion of the burning too great to let go…

“Hammers thrust Within the cells, You’re a torch to the temple of depression, Saturnalian curse, These are my heaving words, I will do it all over again to be with you.” As if that isn’t just beautifully brutal!

As the listener delves further into the depths of majesty that is City Burials you imagine falling softly through the sky towards an imminent forceful connection with the ground below. But, thanks to Jonas’ gripping voice the near end is not even acknowledgeable.

The music of Katatonia is meant to guide us to a perfect blissful end no matter the danger or what lay behind our existence. “Lacquer” was the first teaser we were gifted with from the album. Starting off with the pluck of violin strings, an accordion and Renkse, “Lacquer” exudes an invisible pain that builds and builds to a crescendo where we hear perhaps some of Jonas’ finest vocals work to date.

What I have always loved about Katatonia is the feelings and emotions that they pull out of us with each song on every album. There is no pretension or need for critique and acceptance which is where track four fits in so eloquently. “Rein” has an off-kilter jarring feel about it but still nobody could pull off the kind of musical cinematic splendour in four and a half minutes that Katatonia has done with “Rein”. Its total sonic body sees “Rein” quite a left of centre song for them to write. (Although they did release the acoustic Dethroned & Uncrowned [2013] album following on from the stunning Dead End Kings [2012].) (*edit…Upon four listens through the album now “REIN” is my favourite track on the album thanks to its idiosyncratic nature to past Katatonia songs.)

Launching into song five and hitting me in the fucking feels is “The Winter Of Our Passing”. Driven by bass and drums with keys, a huge focus what kicked me in the guts immediately was the vocal trade-off between Jonas and stylistic drum accents courtesy of Daniel Moilanen. The pulse of these two interspersing between each other is true magic and something you need to hear.
Speaking of partnerships, it would be criminal of me to understate the bond and perfect blissful unison that Anders and Jonas clearly share to deliver some of the most intense and powerfully heavy progressive metal songwriting over nearly thirty years. As the two of them have created a creative and beautiful outlet, without disregarding the talent in Niklas Sandin on bass, Daniel Moilanen on drums and new absolutely grounding guitarist Roger Öjersson City Burials emanates and (as for their entire career) Katatonia for that matter are that resonant articulate voice and shoulder that we need to hear and cry upon collectively. Taking from our collective melancholic quiet consciousness’ they without meaning to, write the score and paint the picture of all that clouds our skies. Take track seven, for example, the title track no less “City Glaciers”, it is a heartbreaking ballad, reminiscing of love disappeared when it was a perfect union and made two halves one, complete and never should the hearts be shattered.

It will be here I shall lay the review to rest and implore you to purchase it. In our time of isolation and need for companionship here in April 2020, a time and situation we could never have foreseen ourselves in at the beginning of the year, Katatonia’s – City Burials is an uplifting cruel album yet is the 2020 grey filled noir soundtrack to our world right now.

One that we actually did not think we needed.