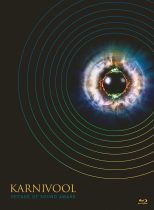 Karnivool’s second album Sound Awake revolutionized the Australian music scene when it came out in 2009.

Following the breakout success of their debut album Themata some four years earlier, Karnivool had been identified as a band to watch out for, their blending of progressive and alternative rock with harder edges a breath of fresh air on a global scale.

As brilliant as Themata was, there were many who questioned Karnivool’s (or any band for that matter) ability to surpass the sonic freedom exhibited by these unknowns from the Western side of Australia, but surpass it they did.

Now, some 12 years later, Sound Awake is still recognized as the musical landmark in a career that still promises so much.

Lauded by fans and critics alike, the album has stood the test of time and, if anything, gotten better with age.

It is no surprise then that in the midst of a pandemic and with little hope of playing live in the foreseeable future, Karnivool decided to pay homage to the album by recording a LiveStream concert and playing the album in its entirety.

The setting was The Heath Ledger Theatre in Perth and aside from the fact no crowd was permitted inside because of lockdown restrictions, it was business as usual for the five piece musical juggernaut that is Karnivool.

After having numerous failed attempts at touring the album to the masses, Karnivool bravely settled on the LiveStream option, determined to celebrate the milestone with their fans by any means possible.

That LiveStream, recorded earlier this year, has recently been packaged and released on BluRay as Decade Of Sound Awake, much to the delight of the many fans who have been yearning to experience the spectacle in person.

After a brief announcement acknowledging the countries custodians, the event idled into life, following a hooded man as he walks into the theatre and into the sound room.

It is an interesting start to proceedings, building up the tension rather than assaulting you front on from the get go.

A voice-over from an obviously well-educated man builds suspense as the camera follows the band on stage before Simple Boy roars to life as light textures wash over the screen, and you are suddenly plunged headlong into the world of Karnivool closer than you have ever been before.

A feature of Karnivool’s live performances has always been the accentuated light show coupled with atmospheric music, and from the outset the band emphatically announce that just because there is no audience in front of them, this is still a Karnivool show and will be performed 100% as such.

Admittedly, the initial vision of empty seats and no crowd noise was slightly disconcerting, but only momentarily as Karnivool settled into gear and hypnotically dismantled any underlying fears that this was going to be a lack luster affair, void of the usual trimmings.

Ian Kelly’s voice exploded as powerfully as ever and even before the end of the first song it was evident this was going to be a full production concert with no detail trimmed to reflect the conditions.

As the band worked through Sound Awake in order, you could almost sense them becoming more comfortable with their surroundings, only a thin, almost transparent curtain separating them from the emptiness of the theatre in front of them.

Of course, a couple of things stood out like the proverbial canine testicles, most noticeably the silence between songs where the crowd would normally yell and cheer, and the stillness that almost reverberated with it.

I asked Kenny in a recent interview how difficult it was playing Sound Awake from start to finish, especially considering the magnitude of many of the tracks and the fact that they were not written with an intent or desire to ever play them as a body of work. His response was something to the tune of exceptionally difficult, not that you could tell watching the performance.

The curtain soon evaporated and the songs flowed into one another as though they were written as part of a score, and it is testament to the quality of material that no song really stood out significantly from the others.

I would be lying if I said that the overall performance was as good as I have seen the band before, but given the circumstances and conditions it was a damn fine effort.

If anything, it showcased the professionalism of the band and their dedication to their craft, but, more importantly, their refusal to allow outside factors spoil what is rightfully their party.

As a special bonus for diehard fans, Karnivool also played Fade, Roquefort (complete with brass section) and Aeons after the completion of Sound Awake, and finished the set off beautifully with new single All It Takes which has also since been released.

All It Takes is a belter of a track, and stands out as a slightly heavier song when played after tunes recorded over a decade ago. It hints at a possibly slightly heavier direction for future material, but when it comes to Karnivool I have found it is better to keep a clear mind on what to expect because the moment they sense you expecting something they change things up, if only to prove they are still masters of their domain and will be for as long as they want.

And we wouldn’t have it any other way.

To get a copy of Decade Of Sound Awake and keep up to date with what else the band is up to, visit https://linktr.ee/Karnivool