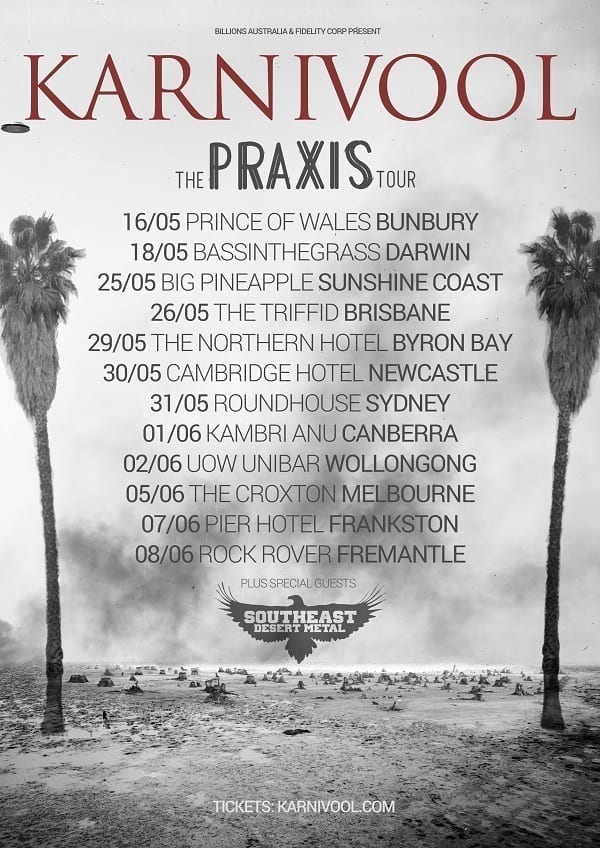 When some people hear the word “Roundhouse”, they think of Bruce Lee. When I hear it, I immediately think of the iconic music venue on the UNSW campus. This joint has been hosting live music for over fifty years and has seen the likes of INXS, Green Day and Foo Fighters grace her stage. Tonight, it’s my first trip back to The Roundhouse since its recent refurbishment, and what better way to check out the new interior than with Perth prog-rock legends Karnivool!

It was great to see a large thong of “vooligans” already inside to check out the opening act. Launching like a dust storm from the red centre, the most isolated metal band in the world, Southeast Desert Metal. Hailing from the remote Indigenous community of Santa Teresa, these fellas have forged their reputation playing the dusty festivals of central Australia. I had heard whisperings about this band, but I must admit, before tonight, I hadn’t listened to any of their material, nor had I seen them live. They won me over with the opening riff of their first song, ‘Desert Metal’. Influenced by legendary bands such as Sabbath, Maiden, and our own AC/DC, their songs are built on fat riffs and pulsating grooves that thunder along like a road train across the Nullarbor.

With titles such as ‘Disturbing The Spirits’, ‘Spirit Woman’, and ‘Eagle’, their music maintains the Aboriginal tradition of story-telling, passing on tales of their people from one generation to the next. The songs are gritty, compelling, and the riffs are as scorching as the red Earth from which they originate. Catchy songs ‘Let’s Rock’ and ‘The Giant’ had plenty of heads nodding along. Make no mistake, these guys rock HARD!

Guitarist/vocalist Chris Wallace came across as both honest and humble. The band held their own on stage, but it’s what they represent that carried the most weight: forty thousand years of Indigenous culture combined with the iconic Aussie “pub rock” sound, this band is the embodiment of the message on the Karnivool T-shirt….” sound is the factor that holds it together”. It came as no surprise that when I went to the merch stand after their set, all copies of their latest album Break The Silence were already sold out. I did manage to grab a copy of their self-titled debut album. If you like beefy guitar riffs, and upbeat, rocking tunes, be sure to check this band out.

It’s been six long years since the release of Asymmetry, and with a new album on the horizon, Karnivool is giving us taste of what we’ve been missing with a series of shows dubbed The Praxis Tour. With The Roundhouse bursting at the seams, Ian Kenny and co hit the stage with the distinct, bass-laden groove of ‘Change’, and instantly, the whole crowd was moving and singing along.

Karnivool is a band with high standards, and tonight was no exception. The sound was huge, with each element complementing the other, and of course, Kenny’s vocals coming in over the top of it all. He controlled proceedings like a compelling conductor, combining with the rest of the band to deliver a seismic set that had the crowd revelling rapturously. The setlist spanned all three of their full-length LPs, and ‘Simple Boy’ and ‘Set Fire To The Hive’ from 2009 album Sound Awake gave the audience an early shot of adrenaline.

With the punters primed, they gave us a new song, ‘Animation’. Packed with the complex rhythms of Steve Judd and the unmistakable bass of Jon Stockman, the song was potent, and distinctively Karnivool. It was given an overt cheer of approval from the Roundhouse referees.

From there, things cranked up a notch, with ‘Shutterspeed’ putting some bounce into the pit, and both ‘Goliath’ and ‘Deadmand’ had the punters singing along in full voice. The momentum and energy were building perfectly throughout the set, and with the audience peaking at the right moment, ‘Themata’ was the powerful pinnacle that sent them over the precipice, with the whole crown screaming along in unison.

The punters called for one more song for what seemed like an eternity, with the band eventually coming back for two Earth-shifting encores. The first, ‘Roquefort’ getting a raucous reaction from the feverish fans. They closed the show with ‘New Day’, which once again had everyone in the venue vocalising vibrantly, with Ian Kenny once again the masterly maestro.

It’s been a few years since I’ve seen Karnivool live, and I’d almost forgotten how good they are. Almost. Tonight, Karnivool lived up to their reputation as being one of Australia’s premier heavy music acts. Power, precision, astute musicianship, a fantastic atmosphere, and passionate audience engagement. Rumour has it that they are “many, many months” into a new album. Let’s hope it’s not too far away, along with another tour!