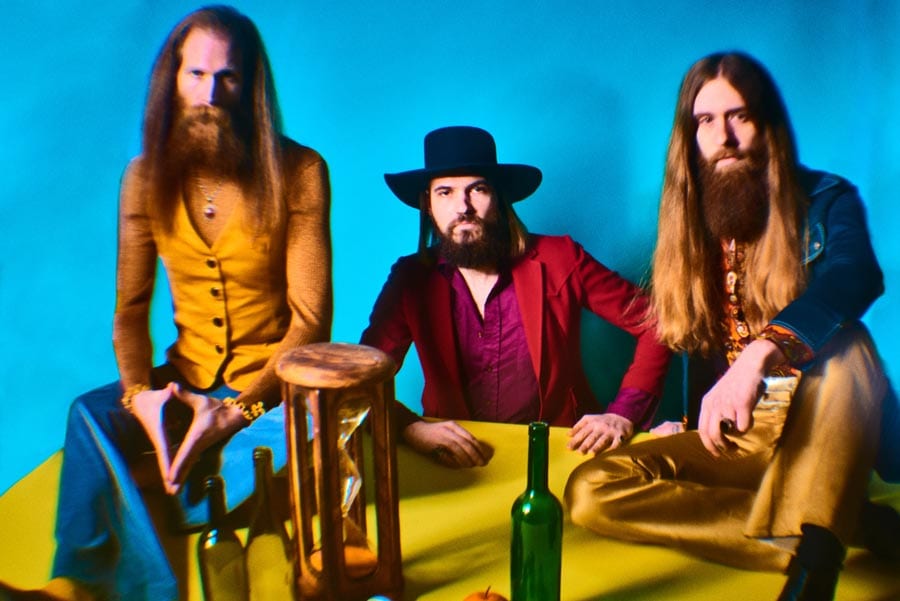 If Willy Wonka had a favourite band, Kadavar would be it. It’s clear by the deliciously strange and heavy tones of the band’s latest album Rough Times, a lot of thought has gone into its conception. But just like the strange happenings that occur when you spend a day in the chocolate factory, producing their fourth studio album was an experience for the German trio on a whole other level.

More psyched than he’s ever been before about a new release, drummer Christoph ‘Tiger’ Bartelt says that going into recording they wanted to be true to themselves and not adhere to any stereotypes or status quo. Though the word “liberation” has been passed around by the media to describe the essence of the release, Bartelt says the outcome was unexpected and unintentional. “I think for us, [it’s] the same with every record, somehow, whatever it means, the goal is still to surprise yourself, to outdo yourself. Do something that at least for a moment, you think is better than what you’ve done before.

“I think specifically for Rough Times, we had the lyrical concept to somehow paint the picture of the modern world and to tell ten different stories. You asked about liberation and as much as we had a lyrical concept, we had no musical concept and we wanted to experiment a little more, and allow all types of ideas to become part of the record. That’s maybe the biggest difference, making it special from the records before, even if there is a connection between them.”

Though they’ve cleverly maintained a logical construct, ultimately it feels like Kadavar have given themselves more freely. The new album does what it says on the tin – it’s rough as guts, the opening title track bursting in and shifting quickly from one extreme to another. “My philosophy about music,” says Bartelt, “Is that you can be very personal when you play very simple riffs and it has been like that for us, all the time.

“But I think, even more than before, we freed ourselves from ‘You have to use those chords, you have to play this riff’, it can be as simple as putting your personality in there. I think [that’s how] it goes, especially for us because it’s so minimal and simple. There’s [an] energy and aggression you can use to play these notes and that’s what makes music interesting.”

Along with interesting music comes equally interesting and freeing visuals. The video for single ‘Into The Wormhole’ is Kadavar really thinking outside the box, their ideas dark, twisted and metaphorical. “In the first place while I worked on the song and lyrics,” says Bartelt, “I thought about the main character, David Sphaèros. He lives in Paris in a subterranean cave and you see that in the video – there’s a connection, I wanted to show this room as [that] part of the song is trying to escape reality sometimes.”

Kadavar’s sound is diverse and comfortably so – listening to Rough Times isn’t’ in any way eclectic or bad, it’s a well-heeled journey through many sounds and ideas, ideas that are certainly going to be interesting when translated to the live stage. “It’s definitely going to be a challenge this time because some of the songs are going to be huge,” laughs Bartelt. “It’s always like with us at least – when we play the songs live, that’s when you really start to feel them and you take them to another level when you perform for an audience.”

Such diversity in their ideas and even to some extent, their own in interpretations of their work, Kadavar most certainly think that the reactions and understandings of Rough Times are interchangeable depending on the atmosphere of their varying audiences – for Bartelt, its challenge accepted. “I don’t think we’ll change the songs tremendously, “he says, “Two of the songs now have been presented [two single releases] and with the first impression people had, maybe it’s gonna have a different impact with a big PA system on stage. But I know in the first hour, people will know this sound is different to the other records.