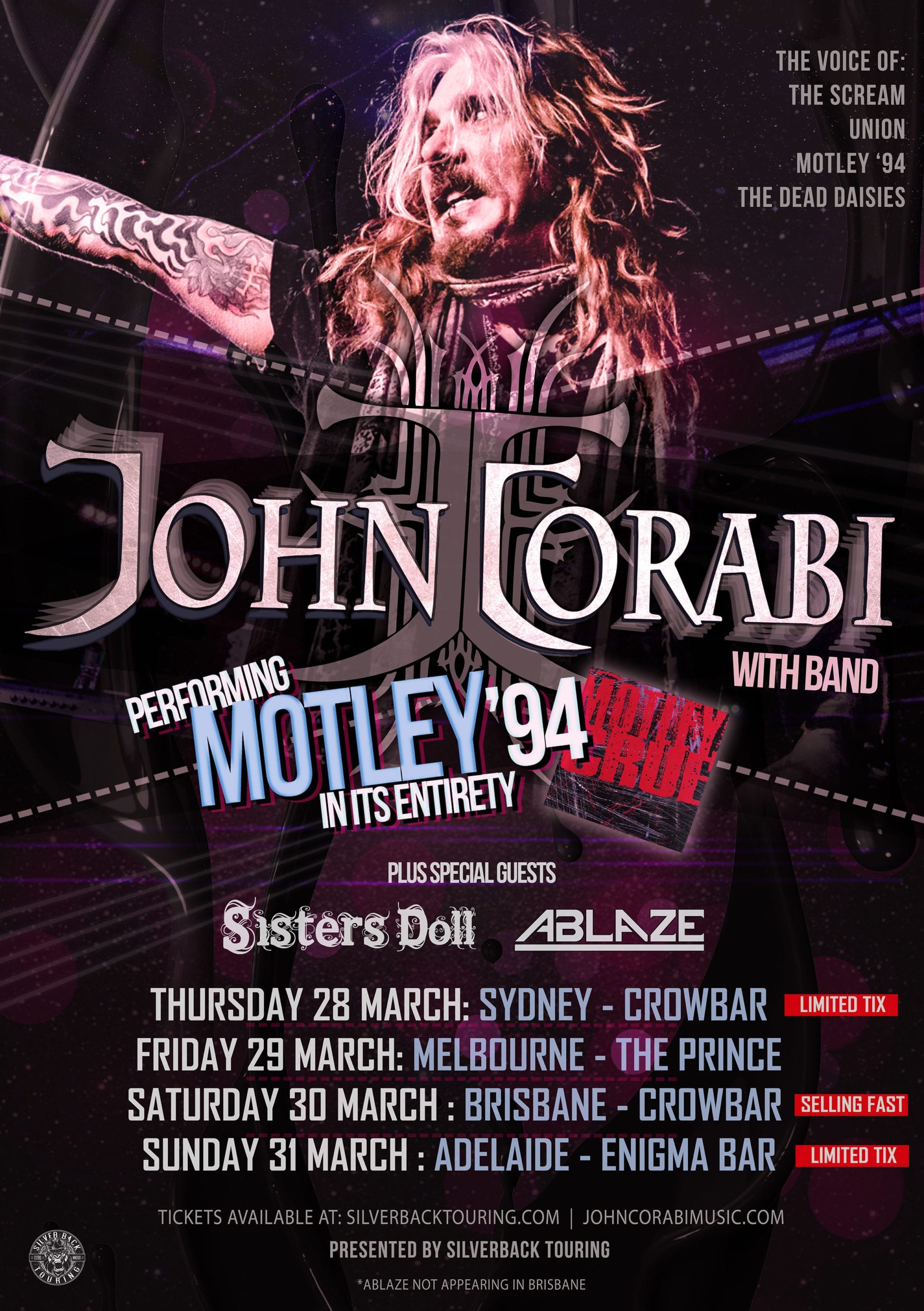 How does one put into words and context a moment in time that comes full circle? It starts as a kid in the 90’s discovering the musical monolith that is Motley Crue’s 94’ self-titled musical masterstroke, though some may argue otherwise, but for this guy and for many, the album remains a powerhouse of musical precision and chemistry that shakes the foundations and if you’re lucky, it’s the kind of album that sits warmly in your life soundtrack. And like the closing song, “Driftaway” it truly does make one “close their eyes and slowly drift away,” too happy times, to musical escapism. But hey, one could talk about this album at length and the depth of profound impact it had on this impressionable soul, but you get the idea and know that we all have at least one album that has a similar effect.

Tonight, in the bowels of the iconic Crowbar- Brisbane, many lucky fans were witness to a night one could call Rock 101. It truly was a lesson in rock n roll and a musical journey through the album that took Motley Crue and a then globally unknown singer/songwriter named John Corabi on a musical path of highs and lows that was well and truly celebrated tonight. Celebrating 25 years since the ‘94’ release of an album that really hit ahead of the curve at the time, and sits strongly stacked even against today’s overproduced standards.

Proceedings kicked off with Melbourne rockers, Sisters Doll (yes, that rock trio from that show on Channel 7), who waved the flag for Oz rock with enthusiasm and excitement that showed much promise. These guys have certainly grown as a band musically and their well-rehearsed stage show shined with potential. Playing their singles, “Welcome to the Dollhouse,” as well as the new single“Black Mirror”( which gave a great nod and commentary to our social climate of today, which was quite refreshing), and closing with a great rendition of the KISS classic, “Love Gun,” the boys delivered and won the Brisbane crowd over. Some minor technical feedback did very little to slow the pace, and the guys showed finesse in the making.

With little delay, the main event kicked off right on schedule, and boy did this crowd lap up every single moment. Opening with the insanely good “Power to the Music”, the band were firing on all cylinders and the man of the hour, John Corabi took flight and soared with all the grace and body of a damn good fine wine. His vocals were well on point and he showed incredible discipline on the microphone. And what a band! His backing band, featuring members of Gene Simmons &amp; Ace Frehley’s touring bands, as well as his own flesh and blood pounding the drums and filling Tommy Lee’s critically acclaimed skills on the album, (though, when one compliments, he claims Lee has big pants to fill and like his dad, the kid has a great wit and sense of humour to back up his thunderous percussive skills). “Uncle Jack” follows and does not fail to lose its charm, as Corabi and band power through with absolute finesse.

John informs the crowd, that obviously the band will be playing the self-titled album of tonight’s celebration in its entirety, as well as share some stories that all in attendance want to hear of his time in Motley Crue, as well as some jokes. He insists on sharing a joke immediately and talks of a time in the UK, where he had a sexual encounter with actress Kate Beckinsale, but the people at the Wax Museum found it less than tolerable, as everyone laughs, and the band launch right into “Hooligans Holiday,” Corabi commanding the crowd “you know what to do people!” Safe to say, the crowd responded, as everyone passionately sang and screamed the monster single back at him and his band with joyous rapture. In songs like this, and even the challenging “Welcome to the Numb”(John pre-empts the song by explaining how it was impossible to replicate live as it was recorded in 3 different keys on guitar with chord changes and all, but guitarist Jeremy insisted and the band has made this a staple moment in the set since) ,the band really take the opportunity to show more than just a band playing tribute, but a band musically tight and loving every moment and playing it like the material was their own.

Tonight, if one was lucky to really observe and notice, the amount of humble gratitude, John had for his band and each and every person in the audience. A guy from Osaka, Japan stood near in tears of joy, in total awe of this show along with safe to say, every person. It was sights like this that shined just how important tonight was to so many people and for one night, time stood still as we all shared in a rock n roll moment. There was little to flaw in tonight’s show. Fate would not allow such a thing for such an important celebration. The stories were just incredible. Heartfelt, honest and in all honesty, Corabi could do no wrong tonight with this audience. His stories included recording the early demos when he joined the Crue, before launching into the sentimental and emotionally powerful, “Misunderstood.”

His humour was well received, making fun of the band when they got the fans put on, and saying how very not rock n roll they were, to calling his son, Ian on the drums, “that little shit up the back,” before Corabi and son launched into the groove of “Poison Apples.” The energy and flow from song to song from this iconic and highly underrated album was just simply incredible. The skills of his band would have truly made Lee, Mars and Sixx almost envious, and one could only wish this performance be repeated by a reunion of the 4, but the band tonight washed that wish well and truly away. The Nashville band delivered the goods, and this could very well sit up there as one for the highlight reel of 2019 and even beyond if you ask any Crue head in attendance tonight.

A hilarious tale of Crue’s fall off the wagon during this era led into “Smoke the Sky.” Other tales covered his time prior to Crue, and of course, his story of joining Motley Crue, which whiles everyone probably, knew but didn’t care, because it was just too damn cool to hear from the source. The album of ‘94’ was played to precision and then some, leaving the audience in awe right up to the sombre of “Driftaway”, before returning to encore with “10,000 Miles.”